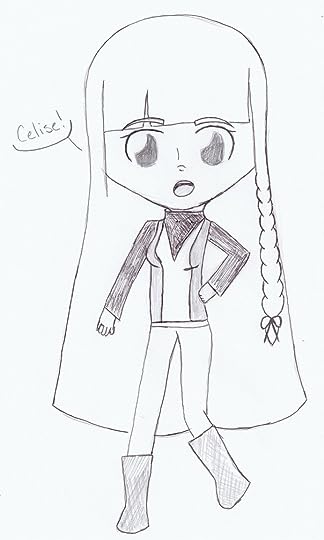 Personality: Slightly shy and introverted at first but becomes more and more...eccentric...as you get to know her

Friends: Whoever wants her

History: Analise was born to the worst people in the world. I'm not exaggerating, it's true. She was physically, emotionally and, at times, even sexually abused by both her parents. Her only solace during this time of her life was a girl from her school, Celise, that she was friends with (and a little more then near the end of her time there) who kept her sane and non-suicidal. A few days after her tenth birthday she decided that she'd had enough of her parents and left town for good. Though not before she said goodbye to Celise who made her promise that once she was old enough (and gay marriage was legal in their state) the come find her so they could be together forever.

And so she had left her town of birth, heading up north, when she ran into a kind elderly couple who, after being informed of her current situation, took her in as their own and raised her until just last year when her "dad" died of a heart attack and her "mom" was admitted to an elderly home.

Personality: Gwen is very quiet, shy, and extremely reserved. She's never felt wanted or appreciated, and therefore she rarely talks. Instead she watches everything around her. Gwen is very kind to others because she doesn't want them to feel the way she has felt. When she finds someone she sincerely trusts she will talk more and be open. She can be very sweet, but is also extremely sensitive. Sometimes has moods of extreme depression.

History: Gwen came from a bad household. From the beginning her mother was a heavy alcoholic. Her dad tried to be compassionate with her and get her mother to stop, but he couldn't stop her. A couple years after her sister was born her father died. He was a smoker and died of lung cancer.

Gwen's mother showed the most love in the world to her sister, but to Gwen herself she was vicious. She verbally abused her, telling her that she was worthless and would never amount to anything. Her mother also physically abused her. She would hit her, burn her, and even cut her. Every night she would leave Gwen crying. Eventually Gwen couldn't take it and ran away.

She was found by cops a year later. Gwen begged them not to take her back but they went anyway. They found Gwen's former house bare and empty. Gwen's mother had died, the alcohol having messed up her system. Her younger sister was being taken care of by some friends. They didn't know of any family members. Gwen was forced to stay with them.

For reasons Gwen never knew, her sister committed suicide 3 months after she had arrived. This was almost too much for Gwen to take, despite the fact that she was never close to her sister. She tried - unsuccessfully - to kill herself.

Gwen was hospitalized and then taken to the orphanage. 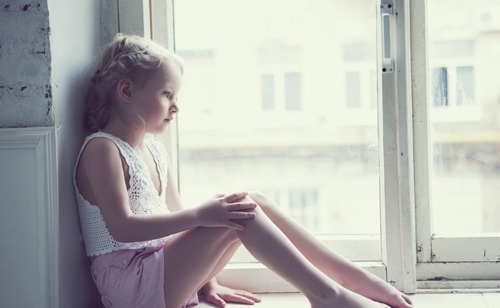 Particular personality traits: Olivia is one of the sweetest children that a person will ever meet. The only reason she has yet to be adopted is because of her serious attatchment to Elliott, basically her adopted older brother. She refuses to leave him, and not every family is willing to adopt a five year old and a sixteen year old - nearly seventeen. She is very shy and sweet around most people, and very clingy.

History: Olivia was an accident. Her birth mother was fourteen when she concieved the child, a stupid teenager who fooled around with several guys and had no idea who the actual father was. She was convinced she would keep Olivia until she actually got home with the baby. She was tired all the time and couldn't keep a baby, school, and a job held together all at the same time. So after only a month with the child, her mother convinced her to give away the child. Olivia was brought into the adoption agency around the same time that Elliott was, when he was only about ten or eleven.
Elliott became her caretaker when she was two, a wobbling, walking infant that wandered into his room constantly and demanded to play with him. He took care of her since then, after she grew on him, and he has done whatever he can to take care of her. 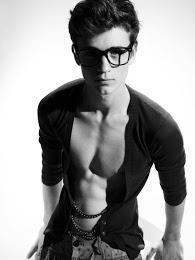 Particular personality traits: Elliott is insanely protective, especially of Olivia. She is basically his little sister, and anyone who comes near her, tries to touch her, or does anything to harm her will have to deal directly with him. And he's done a fair amount of fighting, in his attempt to gain a reputation in the orphanage.
He's protected Olivia since she was a toddler, and now the two of them are inseperable. He feels aweful when she passes up adoptions to be with him, but he can understand. They've made it through this. Together. They won't go back to being apart.

History: His story started with alcohol, the death of his mother, and a belt.
You can probably guess the story; when he was a child his mother passed away. She died in a car accident on the way to pick Elliott up from his first day of first grade. He had been the boy with the new sneakers and dress shirt, hair parted to the side, waiting on the curb with his glasses and brand new backpack with a picture of his favorite cartoon character on it. He was the boy who found out that night, after waiting two hours, that his mother would never come to get him.
He was the boy who's father fell into a depression and began drinking. And he was the boy who asked for too much, apparently, and was screamed at and hit. The abuse was aweful, beatings with fists. And the one time he tried fighting back, he was beaten so brutally he ended up in the hospital for two weeks, needing help breathing and recovering.
He arrived at the orphanage a battered ten year old, and his life began anew. 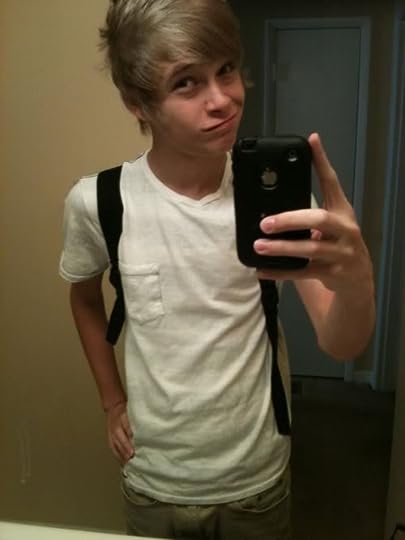 Particular personality traits: Kenny is very open and loud, and loves to make jokes, even in scary situations. He has sarcasm down to an art, and loves to tease everyone. Heck, he'd make fun of the man who held a gun to his head as he pulled the trigger.

History: Kenny's parents were taking a vacation in Paris and while flying home to Miami, were on one of the planes hijacked during 9-11. They were on the American Airline Flight 93, which crashed and burned in a field near Standing Stone, PA. Kenny had been sleeping over at his neighbors house for the week, and he found about the deaths the day after the crash. With no known living relatives, Kenny was sent here.

Name: Brett Herti
Age: 17
Gender: M
Looks: http://2.bp.blogspot.com/-_Y3p6LqMP5A...
Particular personality traits: Luke is incredibly distrusting of people and super protective of Coretta.
Crush: None/Openish...
Family: Coretta
History: Brett grew up in a lower middle class family of four. His father, his stepmother, him, and his brother lived pretty contently.
Brett's real mother had had him and his twin brother at the age of 17. She had always been a little unstable, not that she had any particular problem, she was just willing to try just about anything...twice. Having twins had never stopped her. One day she dropped the kids off, they must've been about six months old then, and never came back. A couple days later they found out she had died from inhaling compressed air.
They had never really known her, so it wasn't exactly their problem. Their step mom was never really wicked, she was just very...insecure. She was nice, but if you said anything that could be taken negatively about her appearance she would start bawling and freak out. Their father was a bit of a clueless pushover. Brett's parents both worked full time jobs, and so the two boys had plenty of time to get into trouble.
Anyway, flashing forward. Age 13.Brett's brother Luke had a girlfriend, Amelia. She was hot...hot for Brett that was. Upon reflection Brett realized that they were only attracted to each other because he couldn’t have her. Anyway, they did it…a lot. Eventually, it caught up with them and Amelia got pregnant. Amelia pleaded with Brett not to tell Luke. So he didn’t and because of her super Christian mom…9 months later there was a kid. From there it just went downhill. Amelia cracked under the pressure of being a mom she went a little crazy, she tried to donate Coretta to GoodWill and commited suicide.
Luke tried to take care of the baby but was mostly dependent on his parents to care for her. Luke grew a gambling problem, built up a huge debt with some loan sharks…and his parents were in the wrong place at the wrong time. Luke, Coretta, and Brett headed for the streets; she was about 1 at the time. Luke got caught up in all the opportunities for bad choices on the streets and it was impossible to get the resources required to care for Coretta. So, one day, Brett took Coretta, and they went to the orphanage.

Mod
Name: Evelyn Stephenson
Age: 16
Gender: Female
Looks:img scr=<"http://1.bp.blogspot.com/-RPNCZ9E7chY...
Particular personality traits: She's very maternal. Protective over anyone and everyone she cares about, but it takes a lot to get her to care about you. She hides it behind sarcastic remarks. Unless of course it's a child.
Crush: open
Friends: open
Family:open
History:Her parents left her. She's not really sure what happened to them, but she waited for them until she was ten, and refused to get adopted, but by then it was to late. Now she's biding time waiting to leave.

She'd have left. She's an adult.

Name: Peter Bowe.
Age: 15
Gender: Male
Looks: Short blonde hair, blue eyes.
Particular personality traits: Friendly, funny...i'm not sure yet if there will be more.
Crush: Open!
Friends: Open!
Family: Open!
History: His parents left him when he was two years old. they left because they...well they weren't good parents. so he was adopted by a man on the street...named gideon. though gideon was later killed by a car. and now peter is all alone

Name: Jack Lyons
Age:17
Gender: male
Looks:Short (but not too short) blonde hair, Black eyes,5'9.
Particular personality traits: strong willed,kinda rough, dislikes authority most of the time, descicive, good problem solver,typically quiet.
Crush: got an idea
Friends:open
Family: none
History:Parents died when he was ten, before the government put him in an orphanage he ran away and made a life for himself on the streets, hes been envolved with a few gangs simply to stay alive. at the age of fourteen he is found when trying to steal food from a bakery and taken to an orphanage, just recently he is transferred to this orphanage because the previus one was closed down.