Carter walks into the Athena cabin, and places her bags on the floor. She sat on her bunk. Already she didn't like this camp. She didn't have any friends. She felt so... Alone.

Tony Davis walks into his mothers cabin, picks an open bed and lays down

Tony wakes up changes his clothes and walks out

Ainsley went into her cabin and sighed. What was going to happen was all real, and she was nervous. She grabbed a small backpack and started to put neccesities in it, like nector and ambrosia, clothes etc. She looked over her shoulder to see a picture that she hung up over her bunk a while ago, it was a picture of her sister and besides it, a map that she and Ainsley had drawn a while ago. She sighed at it, her sister was still alive, but Ainsley was starting to question if she'd still be alive much longer, she'd been nearly killed so many times. She folded up the paper and put it in her bag with her other stuff. She then packed up several daggers that she could use, and food that could last them a couple of days if they needed it. A child of Athena always had this kind of stuff on hand in case it was needed. She also grabbed a bottle of water. She looked back at her bunk one last time, and grabbed her stuffed animal bunny (She planned not to tell Mike or Rell about this) and headed back outside, this time not looking back.

reply | flag *
message 14: by [deleted user] (new)
Apr 20, 2013 05:39PM
Alexandria walked into her mother's cabin and let her mouth drop open...here was everything she would ever need..she was finally home. She walked to an open bed and tossed everything (including herself) onto the bed. She thought about how crazy the day had been. She sent a silent thanks to her mom for claiming her quickly so she could talk to people that actually knew what she was talking about. She felt herself drifting off and she was soon in a dreamless sleep.

Arrow walked into the Athens cabin and sat on her bed looking around at what everyone was doing.

Arrow realized it was just as boring in here than it was outside so she ended up walking out the front door again.

Clara was super tired but still wanted to finish her chapter so she lay down on her bunk and started reading... ((this is what she is wearing 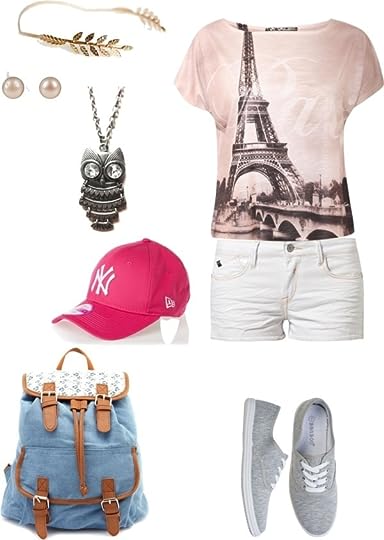 "Clara noticed somebody she hadnt met before." HI " Clara studied the girl. She looked like she had had a rough day

"Nothing much im just finishing my chapter then i might take a nap, what are you looking at?"

reply | flag *
message 23: by [deleted user] (new)
Dec 11, 2014 12:35PM
She looked from her laptop to the girl. "Im writing some fanfiction about my favorite book...and builiding my dream house." She blushed a little and crossed her legd getting more comfortable.

reply | flag *
message 25: by [deleted user] (new)
Dec 11, 2014 12:41PM
"its a book series actually... its called Peter Johnson and the Olympians By Rich Rordan. It also has a spin off series called Saviors of Olympus. I so ship the two main character, Peter Johnson and Annabelle Chaise." She was beginning to swith to fangirl mode.

((LOL)) "cool." Clara put her bookmark in her book

Mod
((Sorry for cutting in, but Azalea, IM GRINNING SO MUCH RIGHT NOW.))

((i know right Harriet Porter and the cupfull of water))

reply | flag *
message 34: by [deleted user] (new)
Dec 11, 2014 12:56PM
"Cool... So...you wanna help or do something else?" she wasnt all that good with making friends. Her life had been in the shadows for as long as she can remember. She rebelled in the outside world against a sexist society and now...she was just recovering from trauma.

reply | flag *
message 36: by [deleted user] (new)
Dec 11, 2014 01:00PM
"With my fanfiction. This one is about the two side character Leonardo, or Leo, Valderez, and Cali. Their awesome ship is Caleo. LOVE THEM!!! but not as much as Peterbelle!!! Or peter and annie for the long run." words were just rolling out of her mouth now.

reply | flag *
message 40: by [deleted user] (new)
Dec 11, 2014 01:18PM
She blushed. "yeah...its from HIM?!?!?!?" confusion, hurt and everythings else she had blocked seemed to be spilling out at this moment. She was shocked to the max. Standing up, with her jaw pracically on the floor, she was frozen and had no idea what to do.

Clara walked up to Azalea and gave her a hug. She looked at her "who is he? its good to talk about it." she sat down on her bunk and made a space to Azalea to sit.

reply | flag *
message 42: by [deleted user] (new)
Dec 11, 2014 01:24PM
"it...him...i..us...HOW?!?!?" Memories of a boy that had taken her heart began flooding her mind. Tears formed in her eyes and for once, she was grateful to have someone at her side. "Lucas?" She whispered. It couldnt be...he left her when she needed him most. She found her trident necklace hangin on her neck and clutched it...like she was holding on for dear life.

((this guy/crush isnt a member in this group..hes just a part of my history))

(( trident necklace?? are u a daughter of athena or posidon? no offense just wondering)) Clara stroked her back

reply | flag *
message 45: by [deleted user] (new)
Dec 11, 2014 01:31PM
((this should cover it. Exercept from profile:Unable to cope with losing the only family she had left, she ran away from her classy mansion and fled to the streets of North Carolina’s slum areas. While in hiding Azalea fell in love with a boy. For 2 weeks she was happy, but all of a sudden he disappeared. He left her with a single reminder: a gold trident necklace with both their names on it. Soon after her heartbreak, she became fond of another girl who claimed she was an orphan. The girl deceptively led her back to the wretched boarding school. ))

((kk have you been claimed by athena tho?))

((k thanks i got it but me and 2 posidon kids are going surfing want to come?))