460 views
How do I get my kindle signed?

So I resisted getting a kindle when my husband suggested getting one for my birthday I finally gave in. I love books and really do miss them but I am so lazy now that I don't go to the book store anymore I just buy a new one at home in my bed..so sad.

I now have a problem that my book collection is now growing on my kindle and I have discovered authors that now I love. So what happens when I go to a book signing? I can't have them sign my kindle. And I really have a hard time paying for the physical book and the kindle copy..I just don't have that much money. So what do I do?

So how do we think this will be solved going into the future? Because I am pretty sure as time goes on that books might be very rare things indeed. So does that mean that we will not want signed books? Maybe we will get finger prints on some signature pad or maybe all the signatures will be digital where the authors will sign a touch pad like when you sign at check out at the grocery store.

There are apps like Kindlegraph - http://www.kindlegraph.com/ that are attempting to address this issue.

Mod
I'd let my favourite authors sign the back of my iPad or Kindle.

I think it'd be worth having a nice notebook for this purpose. Something bound in leather or heavy cloth with thick pages. You could paste in printouts of your favorite book covers and quotes and have the author sign the page, then perhaps add a photo of the event. Not the exact same thing as a signed book, but perhaps better in a way...

I actually had someone sign my Kindle. The only downside I see is that there is limited space on a Kindle and that I am now afraid that the Kindle will break and a replacement is not really an option now.

Other than that I enjoy having a Kindle signed by Jasper Fforde and I'm saving the rest of the the back of the Kindle for my other favorite authors.

I do not know if getting the actual kindle signed would be my preferred method..I think the notebook thing is a good idea but that is mainly because I have a thing for notebooks. I love getting a new notebook with all its blank pages and the possibilities of all the things I can write in it..yeah it is a bit of a strange obsession but a cheap safe one so that is good :)

That is one of the downsides to an electronic book. It does sound like a notebook or autograph book are the way to go. What I've found in collecting celeb signatures is that it's not the signature that makes the huge difference, it's the story that goes with getting it. I don't look at Felicia Day's autograph a lot but it's fun to talk about what a fool I made of myself when I met her and got it. (and I totally fanboi'd on her).

Me? I'd actually lean towards having the Kindle ~case~ signed. You can get more cases (I think they're around $30) and when you fill it, you can retire it. Or you can have genre specific cases: One for vamp fiction, one for modern, one for Sci Fi...

My Sony wifi reader has a built in handwriting app that allows you (or any author etc) to write notes at any point in a book. You literally write right over the text or picture or book cover, wherever. I suppose you could have him or her sign across the title page or something.

I was at SDCC this year and was planning to wait in line for Patrick Rothfuss, but didn't have anything for him to sign other than the book thing they give everyone, and I thought about it and realized I had no real need for his signature on a piece of paper, I just wanted to meet him and tell him I loved his books and I missed watching Storyboard. And then I saw him on the floor at a booth and did just that. Though I hesitated to bother him while he was trying to hang out, he was very gracious about it.

Now I did get Felicia's sig on the new Guild book, but more because I wanted to say hi and the lineup was for her to sign them, and I'd just bought the book right then.

Why do we want to get things like books signed? It's not like the author knows me afterwards, I'm just one of the thousands of faces he/she saw that day. It increases the value but how many who get a favorite book signed by an author plan to sell it? Proof for bragging rights? I'll remember just fine meeting Pat and Felicia, don't need a scribble in a book to remind me.

If you go to a book signing, buy the print edition. Buy it at the store that is hosting the event. The stores need people to buy the books so they can continue hosting signings. They are definitely going to be peeved if you bring in an Amazon Kindle to be signed. For some major signings, they may even require a purchase of the author's latest book. I really think that's reasonable.

I've not seen this thread before, but it gave me a great idea. It's such a great idea, I'm going to share it with everyone. Ready? Here it comes:

That would be awesome.

Michele wrote: "I was at SDCC this year and was planning to wait in line for Patrick Rothfuss, but didn't have anything for him to sign other than the book thing they give everyone, and I thought about it and real..."

You have pretty much echoed my thoughts on the subject. I couldn't care less about signatures; they don't really mean anything at all to me. Perhaps in the future, such events will be more of a meet and greet than a signing. Something along the lines of:

Done and done. (picture optional, but at the only book signing I ever went to everyone brought a camera and someone from the store collected them and took the pictures for them, so I figure it's all part and parcel)

Mod
Ruth wrote: "Pose for photo, then onto the next person."

Yeah. I probably will treasure the photos of me talking to Brandon Sanderson more than than the actual signatures I got on my books. His signature is a bit silly anyways. 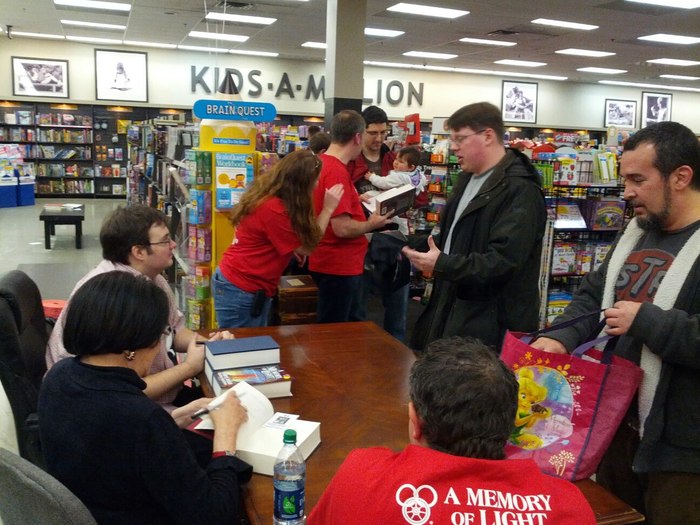 I figure if I ever fill the cover I'll frame it and start another. I am still a physical book person but now every time I open my kindle I think I feel.... a deeper satisfaction with it.

Rob wrote: "Ruth wrote: "Pose for photo, then onto the next person."

Yeah. I probably will treasure the photos of me talking to Brandon Sanderson more than than the actual signatures I got on my books. His si..."

I wish I had a photo from when I met him. I honestly didn't think about it until after the fact. I do have an autographed Way of Kings from the time, and it is a prized possession, mostly because of the memories associated with it.

I want signatures from so few authors I'm willing to buy a hard cover just to get it signed, but since I also get hardcovers of books I really like, the two dovetail nicely.

I've recently thought about getting a hardcover of Unfettered, and trying to get all the authors to sign it. They had a signed numbered edition, but it was a little out of my price range. In any case, it would certainly be a project, and it's probably the best anthology I've ever read.

As to why do we want autographs? Short answer is, it's a tradition, and traditions aren't always logical, in fact they usually aren't logical. It is also a great excuse to meet a writer and tell them you like their work. And most Geeks need that excuse.

Mod
Daran wrote: "I wish I had a photo from when I met him. I honestly didn't think about it until after the fact."

To be fair, it wasn't my idea. They had a helper would take your camera/phone and took a bunch of pictures while you were up at the table.

It's a lot easier/more efficient than trying to have posed photos with the author AND have him sign all those books.

I'm really glad they did it, because I was by myself and wouldn't have thought to ask someone to take photos.

I had a very nice conversation with Neal Stephenson when he visited South Africa last year - we were early and he was hanging around on his own. He signed my copy of Anathem and I got some nice photos but later I wished that I rather had my Kindle with me. I would not mind his autograph on it!

Rather than asking for a physical signature, how about asking for a brief personal message which you record on audio or video via your phone?

That's at least as personal as a scribbled signature, and many ebook readers are audio capable, so you could store the sound file next to the book.