The top says all~

I have an obestion with doing this.... 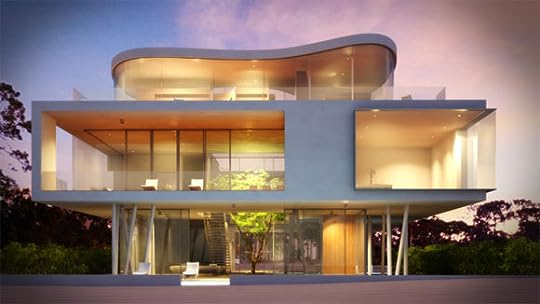 Theo drove up his driveway and exited his car. "I'm home!" he yelled, locking the car door. He grabbed the handle of the front door and pushed only to find it was locked. "Strange," Theo said. "Dad is probably at work." He took his house key (Which is on the same chain as the car key) and unlocked the front door. When he got inside, he threw his backpack on the floor and flopped on the leather sofa. "I wonder what those three are up to." he said, eventually taking his backpack and walking up to the third floor where his room was. The first floor was a small living room while the second floor was the kitchen, dining room, as well as a bigger living room. The top floor had two bedrooms and a media room, particually Theo's. When he got to his room, he took out a piece of black paper and a white crayon. He drew his dog's name Dazpup and put it aside. "I will give that to you later." Theo said, looking to the corner of his room where a dog house was. The dog Dazpup was a chow chow sharpe' mix, two of his favorite breeds of dogs. The dog's wrinkly, yet fluffy face, showed laziness.

"Ugh. I am so tired. I don't feel like making a lunch and going back to school...I am just going to diss. I don't care if I get a detantion." Theo turned to his companion. "Do you?" The dog whined.

((HOW'D YOU GET HOME FROM SCHOOL SO EARLY?! ah well, tomorrow's a saturday i shall make so just 4 now ^^ *coughs* loner *coughs*))

((In reply to your name, I want cream cheese wontons so give me some.))

((well you need to make them cause i cant its 8:23 and tomorrow is school. you should post for alice weve been waiting))

"Hmmm....when school gets out I should text Rin if she is free tomorrow. Sounds good Daz?" Theo asked Dazpup. He barked wagging his tail.

Daz gave a friendly kiss and ran out into the backyard, where he began to fling a toy. "Would you like to go into my media/art studio/room?" Theo asked.

Oh...do you want to rest at my place? Or should I drive you home?" Theo asked, feeling bummed.

"Okay, follow me." Theo said.
*Gets there*
"Here we are! This is where I do all my arts, remix music tracks as well as make my own songs, and where I sleep all in one room." Theo said, walking into the huge room.

Theo smiled. "Hey, if your tired, I won't stop you from falling asleep. You can sleep on my bed in here, it's time for you to be a guest, and don't worry, I won't leave." Theo smiled. "I have to finish this painting im doing."

reply | flag *
message 25: by [deleted user] (new)
Mar 08, 2012 09:02PM
Opal smiled. "thanks." she walked over to the bed and took her shoes off setting them by the bedpost. She climbed under the covers and fell asleep almost instantly, breathing softly she snuggled under the covers a bit more.

Theo turned to Opal, and smiled, taking off the tarp of the painting. The painting showed a child, female, holding her teddy bear up and crying, but the tears showed a reflection of what were happening. Her hair was rainbow, each strand a different color, while everything else was black and white.

Theo noticed Opal waking up just as he is finishing the touches to his painting. "Hello. How'd you sleep?" Theo asked.

"Um...actually no. I was completing it. The only thing there before was the girl's face." Theo said. "Like it?"

"It represents a girl who has her life drained from her, but she isn't dead. The only thing growing...or living to be presice, is her hair, and each strand represents a different emotion she is feeling." Theo said.

"We can eat early then go back up here to talk. It's supposed to get dark quickly." Theo said flopping on his bed.

"I can make some pasta. Do you like tomato alfredo?" Theo asked.

"Cool! I love cheesy-garlic bread. Looks like Italian tonight!" Theo said, getting up from his bed and going to the kitchen. He took out bow-tie pasta and boiled it with hot water. Then add the sauce he heated.