Mod
This town is the largest that has been made. It is the main stop for all travelers to stock up and trade, also for resting and having a good time with friends. But it is also a dangerous place when the city is asleep. Monsters rule the sleeping hours. Be careful. 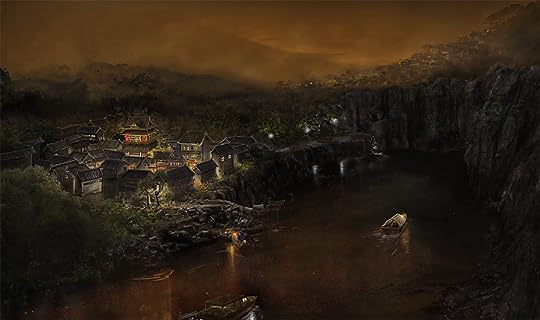 Mod
Luke wondered through the streets, bored out of his mind

Mod
Lacey, otherwise known as Luka, traveled the dark streets of Tirierrah, one of the main port towns and centers of trading for this part of the dark Earth.

Mod
(what creature is he?)

Luka walked past a few of the inns to the outer area of Tirierrah. She started passing tree after tree, soon making it to one of the forestry parks within the Port city.

Mod
Luke saw a girl adn shrunk into the shadows

Mod
She looked around, thinking that she had heard someone in the area.

Olwin was walking in the forest park of Tirierrah, his black pelt changing to gray. He reached the main path and saw a girl and a fallen angel. He lowered himself to the ground to watch. Being protective of humans was in his nature so he waited to see what the angel would do, but he was also weary of the girl, he didn't know if she was an actual human or a half-breed. He had a hard time distinguishing if she was or not.

Mod
Luka looked around a bit and stopped, her eyes flicking back and forth as she assessed the surroundings and what other creatures were in it. Her ears twitched once as she listened to the sounds that the darkness was making.

Mod
Jj249 wrote: "Olwin was walking in the forest park of Tirierrah, his black pelt changing to gray. He reached the main path and saw a girl and a fallen angel. He lowered himself to the ground to watch. Being prot..."

(how did your character know that my character was a fallen angel?)

Mod
Luke held his breath, not makeing a move

Rin ran away from the theives as she passed by Luka, Luke, and Olwin. She jumped over them and landed toward the other side of them. Rin looked back at them in a minute and then ran off being chased by theives. "Ugh, now those people with think I'm the theif....Stupid center of attraction...." she hissed as she found a dark alley and placed her cloak on. She hid in the cracks of the buildings and watched as the theives passed by.

Mod
Luke's eyes flicked to rin for a millisecond.

(by the way, luke is a depressed character)

Mod
((read the post, usally when people say they are hideing in the bushes, they usally wait for the right time in the conversation to make their entrance)

Mod
((ah, Can I make a note that I don['t want spam in the roleplays? For the spam goes in the Chatrooms~ I can make chatrooms for each roleplay~))

"Stupid...stupid...I can't believe I made myself visible to my enemies," Rin muttered as she kept her hood on and still in the dark alley. She took a step out and looked both directions if there was someone who was looking for her. She sighed as she began to walk toward an Inn. She didn't want to meet the people she passed by and be thought as a thief. When she entered the inn she asked where to find the trading post that she can trade her goods for money. She walked out of the Inn and looked for the Trading Post. This is the worst trading city that I have been to. Being an elf I should know how to get here but apparently, I have been caught in many commotions. It's so annoying.... thought Rin as she sat on a bench took out her notebook. The notebook was a checklist with what she had and needed to trade.

Mod
Shadow Lin wrote: "((ah, Can I make a note that I don['t want spam in the roleplays? For the spam goes in the Chatrooms~ I can make chatrooms for each roleplay~))"

Coolkidrox123 {The coolest of them all!} wrote: "(how did your character know that my character was a fallen angel?) "

((didn't mean to add that... my bad about not replying to cuz i was gone all weekend with no comp.))

Olwin slunk out of the shadows towards Luka and Luke. He changed to gray again and kept his shoulders in a charge ready position. "Who are you? Actually the better question is, what are you?" He said. "You are also being watched by someone other than me." He added

Mod
Luka looked behind her and stepped away a bit. Wondering who was asking the question. Her ears twitched as she turned around.

Olwin came into the moon light. "Over hear." He said with a slight growl in his voice.

Mod
((There actually is no moonlight in this roleplay except for the specific places. Like Moonshine Lake.))
She looked over at Olwin, then inspected his face, not moving from where she was. "Why are you so curious as to who I am?" She asked, as she watched him cautiously.

Mod
((Nope, No sunlight at all. It's all darkness. That's why the group is called Survive the Night.))

"The humans are rare and hardly ever show themselves during this time of the sleeping hours. They are normally asleep and safe in their homes, away from the monsters that could take them away if they were out on their own." She said, "Humans, in this world at least, are considered an 'endangered species.' And in answer to your question, I am not human, I was never human to begin with and I am not any part human, though I may seem like one. I am half elf and half Were, a Half-Breed, if you will."

"Hm. Something about you made you see human in the light from the lamps. And I do know that humans are endangered, I am a full Were so as you know I protect humans. I don't know why you seem human, you are far from it." Olwin spoke through a frown. To himself he said, "My senses must be off, I generally know a human from other species." He turned back to Luka. "Sorry for the mistake." He turned to slouch away.

Mod
Luke listened in silence, looking for weaknesses in case it came down to a fight.

(sorry its not so long. i am out of ideas to write with luke)

"Night elves are a race that has descended from this world's previous humans, so that is probably why you may have gotten a bit mixed up." She said, looking at him curiously, hoping that the lie she told was masking her true identity.

((your fine, but you should do something soon))

Before Olwin started to walk he realized he had forgotten someone. He turned to where he knew Luke was hiding and called out "Show yourself! I know you are there, there really is no place to hid!"

Mod
Luka looked over to where Olwin was facing. "Someone else was here?" She asked quietly as she stared at the spot where Luke was as she became immediately cautious and aware of her surroundings.

Luke cursed for not melting into the shadows earlier. At the moment he WAS the tree's shadow, part of it...but he still had a liveing-on-the-street smell and he could still be heard, and his breathing was shallow and his heart like a drum next to a loud speaker.

Mod
((Alright, You reply in Xerria then XD))

"Yes, like I told you before" Olwin growled, "I hear you and... ew smell you." Olwin snapped out of his joke and returned to a low and deep growl.

Luke relactently apeared infront of olwin, just like that, no warning...he had traveled through the land of shadows to olwin's shadow.. thats what luke loved so much about terriah.. lots of shadows

(http://www.youtube.com/watch?v=HzIQGU... HO ON EARTH DEOS SHE GET TO THOSE HIGH NOTES?!)

Olwin jumped back then growled again. "What are you doing here, why were you watching the half-breed?" His ears all the way back.

Luke stared at olwin with unblinking eyes. "Why should you care" Luke said in a deepish, icy voice....if a voice could sound dark luke's did

Mod
How the hell did I miss that? She asked herself as she stayed alert, listening to the one in the shadows and the boy that she had just met talk.

Mod
(ugh, why deosn't this show on my notifications?!)

Luke glared at olwin, challenging him to question luke futher.

Mod
(gtg for a walk)

Olwin took offense and stooped into a deep growl, he jaws showing his teeth and lip curled he said "you don't seem easy to trust, and you don't seem human either!"

Mod
"Whoa whoa whoa! Wait a minute here! What are you going to do?! Start a fight in the middle of a City park?!" She said, nearly freaking out about it. "You can't just go off and do that!"