Hmmm, what's this folder for?

Anyway, are we reading the whole collection or just the tiny story of the same name?

Anyway, are we reading the whole collection or just the tiny story of the same name?"

I think the we'll read the whole collection, won't we ?

I've started by reading the short story itself, then weaving in and out of the others.

My edition (Penguin, 1986) also came with "The Gold of the Tigers: Selected Later Poems". Some fantastic ones in there such as this one which could be our (albeit extended) group motto:

My books (which do not know that I exist)
are as much part of me as is this face,
the temples gone to grey and the eyes grey,
the face I vainly look for in the mirror,
tracing its outline with a concave hand.
Not without understandable bitterness,
I feel now that the quintessential words
expressing me are in those very pages
which do no know me, not in those I have written.
It is better so. The voices of the dead
will speak to me for ever.

Any one find it in ePub format? Or else I guess I'll just try and read it in Spanish.

Does anyone got an ebook download? Since library.nu and Btik are down, it's hard to find anything.

Btik didn't have it anyway and it'll be some time until it is back. I guess I might just buy it.

Yeah, same here, I might as well buy it. I refuse to let this project die!

So has anyone finished it or has it all gone to fug? 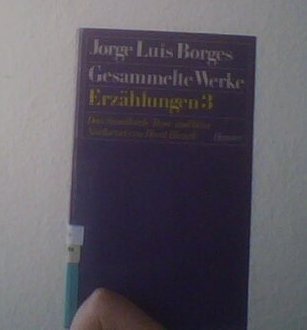 Well would you look at that, I went outside for a change and my local library had a copy :3
I should be working, but it's nice and short, so I already read the first two stories (Der Andere and Ulrike, in german obviously)

One quick thought and no spoilers because I don't know how to kick off a discussion otherwise:
Borges' stories have this distinctive chimney fire feel about them for me, like if you are commanded to get warm and cozy before reading. I didn't have a fire ready, so the nearly spring sun and a jar of liquorice to munch from had to do. And yes, I was indeed rewarded with cozyness. Borges doesn't even write for that, it must be some kind of byeffect.

Well I bought the same edition that Bellis has and the first story starts out nicely, so I'm in (after I finished my current book anyway). I also found a pdf on the internets, but I'm afraid it's a bad OCR scan with lots of errors - here's the link anyway: http://krautchan.net/board/l/thread/1...

Bellis wrote: "must be some kind of byeffect"

Perhaps due to the fact that so many of his stories are set in studies and libraries.

I haven't got my hands on the whole Book of Sand collection, but I happened to read the title story (written 1975) alongside the earlier story Tlön, Uqbar, Orbis Tertius (1940).

In Tlön, Uqbar, Orbis Tertius, from the beginning the task of dealing with the monstrous idea is shared, it's about ideology and society. In The Book of Sand the book's religious monstrosity is dealt with personally.

Both stories include conventions of detective novels. In Tlön, Uqbar, Orbis Tertius the writer stumbles upon a mystery, and the first half of the story is about the alleys he goes down to solve it. The The Book of Sand starts with a stranger walking into the writer's apartment, like a new client into a private investigator's office. The writer tries to guess the visitor's story by looking at his clothes, and the visitor takes a while to get to the point before handing the writer a mystery to solve.

It's interesting to wonder what Borges means by "monstrous" in his stories. In this documentary ( http://ubu.com/film/borges.html ) it says Borges' fear of mirrors started when he would browse the books in his father's study alone. He was always afraid that when he looked into the mirrors there a different face would look back.
Of the Book of Sand the narrator says: "I felt the book to be a nightmarish object, something obscene that slanders and corrupts reality."("Sentí que era un objeto de pesadilla, una cosa obscena que infamaba y corrompía la realidad.")

Here's another use of the word monstrous i found in a tab I have open. From the story The Zahir (1949):

"...a cell on whose floor, walls and vaulted ceiling a Moslem fakir had designed (in fantastic colors, which time, rather than erasing, refined) of an infinite tiger. It was a tiger composed of many tigers, in the most dizzying of ways; it was crisscrossed with tigers, striped with tigers and included seas and Himalayas and armies that resembled other tigers. The painter had died many years before, in that same cell; he had come from Sind or perhaps Gujarat and his initial purpose had been to draw a mapamundi. Of that purpose there remained some vestiges within the monstrous image. " ("la monstruosa imagen")

Infinity is monstrous because it is beyond comprehension and therefore threatening our mental world.

Both reflections and the concept of infinity undermine conventional reality, and that seems to be the meaning of the word 'monstrous' in Borges' vocabulary. His stories themselves aspire to the monstrous quality of the artifacts he describes. tldr Borges was a monster.

I didn't take notes in the first reading and returned the book before giving it a second, thorough reading. So no deep analysis from me (btw nice one, 1211, I just think the monstrous is less monstrous and more fascinating). But did anybody else get the impression that the book was suspiciously /int/y at times? (PS I am tired)