Mod
If you have an idea on a new Spacecraft or Weapon, post it here.

Weapon Name:
What it does:
Appearance:
Extra Info:

Attachments: (Im going to presume you mean it's abilities and equipment)
-The Ability to turn invisible to Standard/Advanced Sensors and the Naked eye, basically a Cloak, but this cloak can show up as a "Pint-sized Nebula" to Certain Scanners, When it is active, Weapons and Shields are Disabled until the ship comes out of Cloak, taking fire from another ship will automatically Turn off the Cloak.
-Front Cannons equipped on the wings, Very powerful, can penetrate Shields partially.
-One Dual Green Plasma Beam Bank also equipped on the Front of the vessel, on the "Head" of the Warship, equally as Dangerous as the Cannons.
-Heavy Shield Array.
-Green Plasma Beam Arrays equipped on almost all sides and parts of the Vessel, Assuring that it can always hit it's Target with at least one Beam, be it behind, in-front, or to the side of the Warship.
-Missiles and Plasma Torpedoes equipped on the Forward and Aft Torpedo Launch Bays.
-Two turrets, one on top and the other under the Massive Vessel, both capable of firing Spacecraft tracking Weak Torpedoes, These are the only weapons that can still shoot when Cloaked. 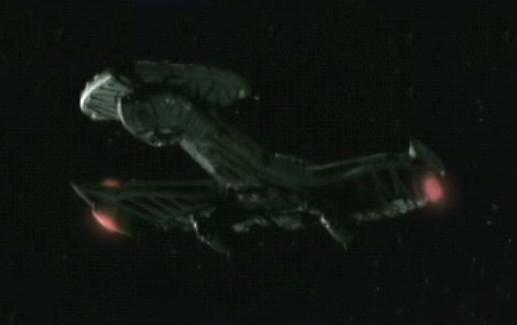 Fore View, Meaning you are currently looking at it's Front. 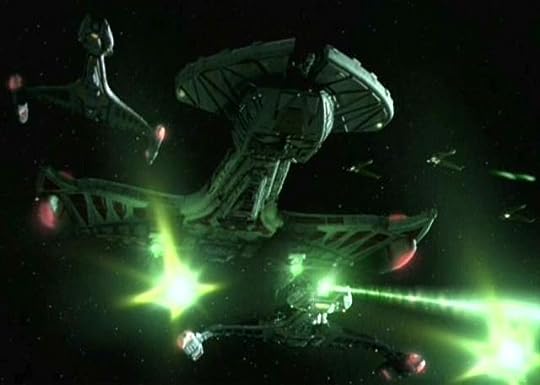 Armor Strength: Even if it loses it's shields, This thing can take Ten Direct Missile hits on vital areas before it starts to lose power, basically.

Extra info:
When fighting this Gargantuan Behemoth, Here are some advice and tips:

-Do not stay in-front of it, That is suicide, Especially on a Small craft, If it's cannons and Dual beam banks won't destroy your ship, it's the Torpedoes it will shoot at you shortly after.

-Do not Fire everything you have the moment you see it, That will only Weaken it's shields, not utterly obliterate it, Instead, Attempt to use only your energy weapons in a suppressive attack style to slowly drain it's shields before you launch Missiles, Patience and Brains is needed to combat this Spaceship, Not Brawn.

-If you see a Nebula on scanners the size of a small Strike Fighter (And that Nebula is moving oddly, like following you, ETC), That is likely the sign of it being nearby under Cloak, Fire Your missiles/torpedoes at it immediatly, For it's shields will not be online during it's Cloak, neither will it's Weapons. (Except it's Weak Tracking Torpedo Turrets, Which arn't that big a threat to you.)

-Move around at all times, moving unpredictably helps too, Staying in one spot is a sure way to get Blown up, but still, try to avoid being in-front of it if you can.

I planned for this to be a Prototype warship built by the hostile Aliens.