My cinementor brought this over for a "movie night" and I'm now officially hooked on Antonioni's films. I just reviewed RED DESERT in this forum so I hope you check that one out. It's been a few years since I've seen BLOW UP or THE PASSENGER but I can't wait to revisit these film also. Well, here's my two cent piece:

“This above all: to thine own self be true, And it must follow, as the night the day, Thou canst not then be false to any man.” –Hamlet.

The empty characters are false unto themselves, unable to make any real connection to each other; they are each an island surrounded by violent surf where sleek voracious sharks forever prowl. Director Michelangelo Antonioni employs a classic Hitchcock MacGuffin; what at first seems a mystery about the disappearance of Anna becomes a languidly paced seething volcano of internal friction between Claudia and Sandro, Anna’s boyfriend. The enigma is never solved and only a few peripheral clues are revealed while Antonioni focuses his attention upon her two selfish companions. Claudia is the sympathetic character, distraught at her friend’s disappearance and begins to follow leads and search for Anna. Sandro slowly corrupts the fragile Claudia and, I think this is key to understanding her guilt, she allows it to happen. She becomes an echo, like a voice reverberating inside a deserted church, its doors forever closed to her redemption. Sandro is superficial and callous, a cold-blooded predator always in motion, searching for his next prey even while devouring his current victim. Claudia resists and turns him away, bearing the guilt of her friend’s possible death, confused that she enjoys Sandro’s attention and objectification. Antonioni utilizes long takes, allowing space to ebb and flow between the character’s movements like the crashing sea. The characters diminish in importance, vanishing down long corridors or pinned like dead butterflies through deep focus static shots, framed within frames of curtains, doorways, and windows. His brilliant use of sound creates an environment of spiritual malignancy; the dry crackle of leaves, lonely clacking footsteps, and the ocean’s ubiquitous rumble. Claudia has one final chance to break this emotional bondage to Sandro but her trembling hand touches the void. The final shot is magnificent: a crumbling brick wall, Claudia and Sandro tiny and insignificant, dominates the frame while a volcano lurks ominously in the background, a metaphorical sleeping giant that shall one day awaken and destroy their sordid affair. (A)

i'm so glad you caught this one, alex - what a great review. i know i rave about a lot of films, but this is one of my very favorite favorites! great psychological insights on claudia and sandro.

I HIGHLY RECOMMEND THIS FILM! along with being a fascinating story about a mysterious disappearance, this film is shot gloriously, and in locations that are jaw-dropping in their stark beauty. like hitchcock (interesting you see a connection, too, alex), antonioni was very interested in settings/landscapes/environments. he always chooses place in a way that reflects the character's inward states. and photographing monica vitti (the central character who plays claudia) must have become a joy, he used her in several movies after this one (and oh my, is she ever nice to watch).

alex, if you liked this, you should see the other two films in this trilogy (La Notte and L'Eclisse). but this is the crown-jewel of the three, i think it's my favorite.

Next Friday is LA NOTTE. I can't wait!

this might be one of my last words on the subject: 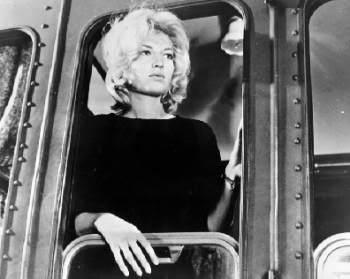 Watching Vitti in high-definition color in Red Desert was the first time I noticed her freckles!
Lovely:)

I've got all three in this trilogy in my Netflix queue. Which is the first to watch? I know I could figure that out on Netflix, but I would love to hear more input from both of you, Phillip and Alex.

I first heard about the series in New York magazine (yes, I live in Georgia and get New York magazine- it helps satisfy/tease my NYC lust) and thought it sounded interesting. Of course, they were screening it there. No such luck here.

the trilogy falls in this order:

Out of the three, the first and last have a highly developed visual style that the second one doesn't quite reach (but it features Marcello Mastroiani, Jeanne Moreau AND Monica Vitti, so the cast is top drawer). I would start with L'Avventura, because that film is really important to his development as a filmmaker. His earlier efforts read more like neo-realism, which is fine - and he made some really fine films in that style. But L'Avventura won the critic's medal at Cannes, and clearly marks a new direction for him and cinema in general.

You should also know that there is no strict order to the trilogy. They don't build on one another. Antonioni made the trilogy to: "explore the difficulties of maintaining meaningful relationships in a decaying society"...i'm quoting him loosely, but i think that is the essence of what he said about the three films.

i also highly recommend one of his later films, The Passenger, which features Jack Nicolson in one of his better (early) roles.

Seeing these films on the big screen are such a treat. L'Avventura is really something visually speaking.

It should be right up my alley, then, since visual appeal is so...appealing to me.

Thanks for the feedback, I am excited now! I'll move L'Avventura up in my queue. Strangers on a Train is next.

reply | flag
message 10: by [deleted user] (new)
Nov 16, 2008 07:02PM
I need to check these ones out. The only Antonionis I've seen are Blow Up and the Passenger, but I thought both were fantastic. Thanks for the recommendations, Alex.

gina, enjoy those, especially strangers on a train - what a treat to see that for the first time.

mike, yeah, check that stuff out. i like the passenger a lot, but this earlier stuff is really special. i won't say more...let me know when you have had a chance to check them out.

Check out the final tracking shot in THE PASSENGER...one of the best ever:)

that's an amazing shot....a perfect ending to that film. you're watching it and you can't quite believe how good it is, how choreographed it all plays, and the information that is passed on to the viewer. that's a master filmmaker at work, kidz.