We're Not The Same discussion

name:
age:
gender
what are you:
good or bad:
north or south side:
pet or no pet:
personality:
history:
other:
crush:
look:

-Alliance- Sindri and his twin have no chosen side, they work for whoever pays them the most.

-Personality- Sindri is the icy, broken twin of the two siblings, having collapsed beneath the pressure of his career long ago and having shut down all but basic emotions to protect himself (and his brother) from a mental collapse.

Once he had been an overly excitable, kind child just as his brother, but those days have long past and left deep scarring in his face. He is brusque, harsh and brutal to all, even to his brother.

-History- Sindri and his twin, Folke, are Icelandic Goblins of obscure origins, thought they only spent their youngest years in their home country. Their mother brought them to this city long ago to escape their godly father, though she soon abandoned them on the filthy streets, leaving them to fend for themselves.

Sindri became the merciless mercenary to feed his younger twin, though they would soon both become immersed in the underworld politics. His training was less than gentle at the hands of an old sadistic demon, but it was adequate training none the less.

Both him and his brother have spent the last years being killer for hire, and neither of them plan to quit soon.

-Alliance- Folke follows his brother as he has for fourteen years, and he's not about to change any time soon.

-Personality- Folke is a rather hyper person, always bubbling over with glee over the smallest of things, which can be particularly annoying, especially for his brother.

He loves pulling pranks and helping anyone who needs a hand, but as a killer, he does have his dark side. Unlike his brother, he takes strongly after his brother, and glories in the death of his enemy, and will go so far as to desecrate their corpses afterwards.

-History- Folke shares the same history as his dearest brother, but while he was training to be a killer, Folke was delving into other, darker things. He was gifted with the tutelage of an old prostitute, who taught him the art of seduction and poisons, and, even worse, how to torture the information out of ones enemies without giving any outward signs of harm.

This is a secret not even his brother knows.

Yeah, thanks, I was getting scared, I thought I was all alone ;-;

what are you: Human but can contact with spirits and ghosts (Medium)

north or south side: North

pet or no pet: Doesn't have a pet

personality: She keeps to herself and doesn't like opening up to people. She hates it when she sees people having to fight, but she fights too if she's under attack.

history: Her parents died in a fire and she's been abandaoned ever since. She's made it by working in a small-time job.

other: She's trying to find her brother

look: Violet is average height for her age, skin slightly pale, her eyes are a dark blue but with purple flecks in them, she wears regular clothes like Converse, a dark tshirt, and skinnies.

reply | flag *
message 12: by [deleted user] (last edited Nov 15, 2011 05:02AM) (new)
Nov 15, 2011 05:01AM
Name: Logan
Age: 11
Gender: Female
Appearance: http://m285.photobucket.com/image/ani...
What are you: A demon with white wings. Confused with angle because she can hide her demon feature's.
Good or Bad: Unknown
North or South: Unknown. She moves around alot.
Pet or no pet: Mini Dragon
Personality: She never trusts anyone. She is very shy.
History: Her mom was murdered by a angle, and her dad was taken. She has been living on the streets since she was 5.
Crush: None. She hates people.
Other: Has a scare down her check.

Name: Kaylee
Age: 16
Gender: F
What are you: Half-Demon/ Succubus
Good or bad: Half
North or south side: South
pet or no pet: NO PET
personality: Snob, stubborn, naughty and quiet. Sometimes nosy and weird
History: Mother's a succubus and a bitch and left her after conceiving her from a human. Her father physically abused her and she...? killed him.
Other: A black tattoo circling her neck and carries a red mask.
Crush: OPEN
Look: 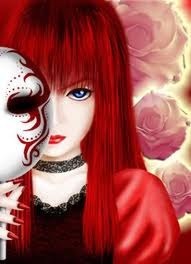 name: winter
age: 15
gender: female
what are you: dragon
good or bad: good
north or south side: south
pet or no pet: white tiger
personality: kind, gental, shy
history: nothing much
other: her element is snow(duh)
crush: open
look her: [image error]

name: anna ( jade)
age: 16 ( 20 in dragon)
gender f
what are you: dragon and wolf ( no one ca tell thogh unlees they look close and knwo ehr)
good or bad: bad
north or south side: south
pet or no pet: a bobcat
personality: quet. fights with others alot beacuse she dosent get along with em
history: you'll learn her child died last eyar
other:her elemt is trees and healing
crush: open
look: reguklar ogta refind it i wil ltormoow http://m313.photobucket.com/image/a%2...
pet http://www.jigzone.com/p/up/Z/OK/80/g... snow
regular http://www0.artflakes.com/artwork/pro...

age: Just been reborn, but looks 14 or so

what are you: Faerie

north or south side: Woods in South

personality: She's still uncertain of herself and can swing from one mood to another. She hates being told what to do and doesn't mind using violence though she is usually charismatic enough to charm people into doing what she wants. She can be rather wild and slightly immature at times though.

history: She can't remember what happened before she woke up in the woods, but she actually died in the forest. The Unseelie Fairies (yes these Fairies are the small type) found her and managed to reawaken her as a Faerie. Tsukino is the only shadow unicorn in the world, created by the Unseelie Fairies as Sayuri's protector. Only Sayuri can see these Fairies, others can't. As far as she knows, she is the only Faerie.

other: She has basic knowledge on how to control the elements, but her real talent is her voice. She can mesmerise people and control them and can calm beasts or order them to attack.

look: Sayuri is slightly taller than average and very lean. She has a pale complexion and her hair is completely white. Her lips are silver and her eyes are red. Her hair is wavy and silver in colour, reaching down to her waist. She always wears an elaborately decorated silver mask cover the top half of her face so people can't see her eyes, which scare people at times.

name: Neena
age: 17
gender female
what are you: shape shifter
good or bad: good
north or south side: north
pet or no pet: none
personality: kind, shy, smart, quick.
history: nothing much
other:
crush: none
look human: [image error]
leapord looks: [image error]

name: Taiyako. Nickname is Taya.
age: N/A
gender: Female
what are you: Demon.
good or bad: Both.
north or south side: Lives on the North.
pet or no pet: No, but loves cats and other felines with all her heart.
personality: Two sided. One evil, one good.
history: Ask her, she'll ether get really upset or tell you.
other: Loves to play poker and other card games, has only lost twice. Always carries her pack of cards.
crush: Not at the moment.
look: http://i1232.photobucket.com/albums/f... http://i41.photobucket.com/albums/e26... When he's evil her eyes are white, when good they are green.

We're Not The Same