Mod
This is thread is started to provide a link to the #soldierporn tumblr as well as the main page and archives of gay #soldierporn content on my website.

The gay-centric content ends around the time DADT was revoked. The tumblr content, however, is ongoing and includes more general news links as well as an increasing focus on human interest stories. It's taken some time but I've begun collecting "soldier stories" that discuss the experiences and fallout of active combat zones.

Mod
One of my favorites, hilarious: 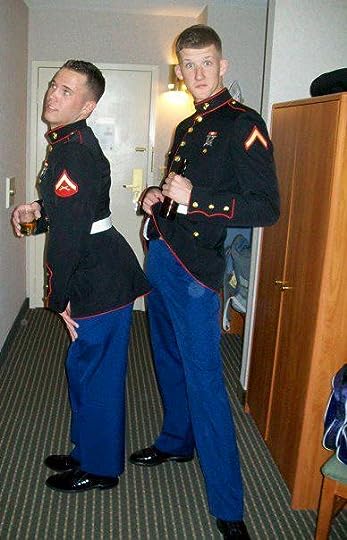 This isn't my work but I'm sure you will find some generous appreciation for it:

"Two Two Bravo Baker" is a fanfic AU of Sherlock and Watson ... set in Afghanistan:

A novel-length, pornographic case-fiction set seven months before and three and a half thousand miles east of A Study in Pink. Captain John Watson of 40 Commando, the Royal Marines, is assigned to protect and assist Sherlock Holmes as he investigates what appears to be a simple war atrocity in Afghanistan. An intense attraction ignites between the two men as they uncover a conspiracy that threatens everything they’ve ever known, but Sherlock’s as much hunted as hunter, and everyone close to him is in deadly danger. Can he solve the case in time to save himself and John?
Notes:

Warnings: numerous references to and depictions of combat, injury, murder, and mutilation of the dead; deaths of minor and major original characters.

Here's the link. I am supposed to be writing. I am getting horribly distracted. =)