Mod
This thread started out as a discussion thread for DEoH, but has evolved into a conversation about Dom/Brian slashfic. So we're gonna go with it...

I've read about 1/3 of the book now and my heart aches :/ I just want to save Sergei

I do hope he doesn't turn out to be a douche by the end of the book...
But atm I'm having this "Romeo and Juliet"-isk feeling about the story. It's just not gonna end well is it >.<

Mod
*tsk* Morg is my stalker, apparently.
...Or is it all a random coincidence?
Am I stalking you??

@Aiko I refuse to spoil the tension. Suffice it to say, you better buckle yourself in for a roller coaster ride. =D

Mod
Morg wrote: "You stalk me, I stalk you back?"

Rhianon wrote: "Morg wrote: "You stalk me, I stalk you back?"

I have the weirdest mental images here now ;p

And I sweartogod any book with Aleks' name on brings out the violent in me. Whats up with that freaking general *growl*

I want to read :( But if I get sucked into my book either my cat will eat my borrowed kid, or the kid will strangle my cat...

And I don't have time to read tonight, since I'm being forced to go to a party, and I think people will give up on me completely if I bring my Kindle. Stupid real life...*whine*

Morg wrote: "I vote for staying home with the Kindle."

I can hide under the table and read like I used to do as a kid in my own birthday parties ^^ If someone asks I can just pretend I'm completely wasted :p

Fanfic is neatly link-archived now. Where Are You Going? is something I might revisit from time to time, when I need smut. I stayed up until 5 a.m. reading the whole entire thing last night... *lol*

(Shh. Don't tell everyone about this. I'm a reputable, published author and all that jazz, I'm not supposed to dabble in fanfic stuff. Even if it features Hot American Muscle and the Fast Cars They Drive...)

Mod
Morg was probably making an effort to keep my journal low-profile, an effort I appreciate greatly. I keep the rest of the content on hard lock-down now, however, so I'm fine with anyone who wants to venture over and read Vinsmut. Hell, who am I to keep the fanfic to myself? *laughs* Kinda defeats the purpose ;)

Mod
The playlist is halfway fixed. Should be full of slash awesomeness from my fellow hardcore Dom-Brian whores now. =D

But who am I to force hugs on if you get kicked out Morg? :/

*hug Lisa* See! my mother taught me to share ;) And I've sneaked my way into Rhi's fanfic

Mod
Yeah. Long as ya don't have to share Vin, right? *rotfl*
Okay, I wouldn't wanna share him either, come to think of it... 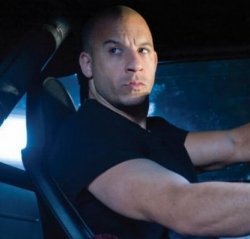 "That gaze reminds me of dark chocolate, a straight shot of espresso. Deep, rich, thick, and slightly bitter. Try to take in too much at once, and it does strange things to you. Like make you addicted, dependant. Jittery." <--- Best description of a gaze ever <3

"Dominic Toretto is my NOS" sorry to sound like a total noob here, but what's a NOS?

Mod
NOS is an acronym for Nitrous Oxide System, a brand of nitrous oxide delivery system that injects high-octane fuel. Drivers use it as a speed/acceleration-boost during races. 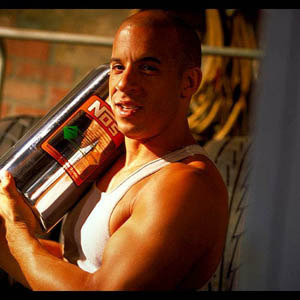 You do realize that your fanfic have distracted me from DEoH now? awwsh...thinking of it I miss my Sergei ^^

Mod
GR won't let me embed. But this is the scene where Brian loses his NOS virginity in the first Fast & Furious movie.
http://youtu.be/pZZ60jrw6cg

Rhianon wrote: "GR won't let me embed. But this is the scene where Brian loses his NOS virginity in the first Fast & Furious movie.
http://youtu.be/pZZ60jrw6cg"

All I have to say is that you lot can keep Vin, I'm stealing myself a Brian ;D

Mod
They are cinnamon and nutmeg, best when together...

Rhianon wrote: "They are cinnamon and nutmeg, best when together..."

Can't argue with that. It's kind of amazing though. I watched the first FF movie when it first came. And I haven't seen the rest. Never even crossed my mind to pair up those two before now.

Mod
My personal opinion: the second movie is okay. The third one is worthless. The 4th one has both of them together again, as does the 5th one. I usually just skip 2 & 3 when I'm have Hot American Muscle Movie Night. ;) They're interesting story lines for the secondary characters in Dom and Brian's lives, but ... eh.

As for the slashing thing, I honestly don't remember who first suggested the idea that the original Fast & Furious had strong homoerotic undertones. Back when it was released, the idea of gay/bi lead characters never would have been openly attempted, at least not in a mainstream action flick like this one.
Once the notion had seeded in my brain, though, I couldn't watch the movie without seeing the subtle suggestions. Vin has a strange way of communicating with his gaze that is very powerful on the screen, and it floored me that I'd not even taken notice of it without it being suggested. Combine that with the undeniable on-screen chemistry between Vin and Paul, and I decided that I'd been thoroughly blinded by socio-cultural expectations.

I take it as an example of how perspective can shift our perception, and strongly influence what we see.

Ok, I defenetly have to see this movie again. Everyone keeps saying they're rubbish though. But I don't remember the first one at all, and that usually means it was just ok. It's the rubbish and the epic that sticks in my mind.

Mod
I think that the quality I see in them, and the enjoyment I get out of them, is largely in what isn't explored on the screen. What's only suggested, implied, or deliberately omitted. Like at the end of the fifth movie, when the whole crew is there in the room. Except Dom and Brian. Heh. There's pieces like that to be found in all three of the movies they're in together. Also similar execution in the other franchise movies as well, but I'll admit that my fascination with it revolves exclusively around the pair of leads, and the dynamics of their evolving relationship.

Gah, I'm rambling. :) Yeah you should definitely watch the movie again. Curious to hear what you think, what you see.

Mod
One of my favorite scenes from the fourth movie that speaks to the chemistry between them:

Now you got me watching Dom/Brian slash movies on youtube ^^

Mod
Oh, Aiko, my playlist has all the best of them in one long stream... LOL. :)

Start at vid #7, and then just hit autoplay... :D The ones that don't have fan video clips are ones that... well, should. One of these days I'll get to it.

oooohh food for fantasies ;D
Downloaded FF1 and gonna go watch it now. Since it's the middle of the night and I can't for the life of me find the strength to go to bed.

Mod
Well of course you can't, not with Dom and Brian parading around on the screen... Viva La Insomnia!

Mod
Fic gets into beginning of FF4, and that's all the further I got. It's not abandoned, just on a back burner right now.

And yes, I'm evil. :) But anticipation is everything.

Oh Rhi! You you you...you tease! You have made me a Bri/Dom slut >.< I didn't need more obsessions you know :p But seriously. your fanfic is wonderful. And the tension and frustration is just soooo good. Loved it!

Morg wrote: "No no, just meant.. Dude. It's Dom/Bri. Do not mess up the D/s-relationship illusion I have in my mind. :P"

Bri/Dom! I have taken my stand and I will stand here proudly...or something ;)

Morg wrote: "In fanfiction, it's always top/bottom. And just so it won't get confusing, works in D/s as well."

well I refuse to follow this rule. At least in this instance. Bri/Dom! Besides, I think it would be hot as hell to have Bri go all D on Dom's ass ^^

Here have some coffee or something. It will soothe those images. Make you open to the possibilities and stuff. I swear, it will all look better soon ;)

Mod
Aiko wrote: "Morg wrote: "In fanfiction, it's always top/bottom. And just so it won't get confusing, works in D/s as well."

well I refuse to follow this rule. At least in this instance. Bri/Dom! Besides, I thi..."

TOTALLY WITH YOU. *nods emphatically* I'm all about alpha males being willing to switch with each other....

Rules were made to be broken.

I knoooow! Pretty Brian reducing tough-boy Dom to a begging mess. What a nice picture that paints ;)
*jump back into DEoH*

Mod
Aiko wrote: "I knoooow! Pretty Brian reducing tough-boy Dom to a begging mess. What a nice picture that paints ;)
*jump back into DEoH*"

Mmmm. Precisely the thought I had... Though I expect Dom would return the favor in kind.

Rhi wrote: "Mmmm. Precisely the thought I had... Though I expect Dom would return the favor in kind. "

I wouldn't expect anything less. I mean...it's in his name for christs sake :P

Mod
I think it's in his sweat, too.

Mod
I've migrated the fanfic over to AO3.
The 'series' is called "Cinnamon & Nutmeg" and I've done some revisions and expansions. There's also a link to a Spotify playlist that includes all the songs whose lyrics open the chapters.

This is my vacation from structured writing projects.
My indulgence.
I expect I'll be engaging it more often. I forgot how great an escape it is, and I love playing with the exploration of character, emotion, interaction. When so much of the equation is accounted for by canon plot and development, it leaves plenty of space and time to play in the grey areas and unknowns. More than I'd have usually, in some ways. 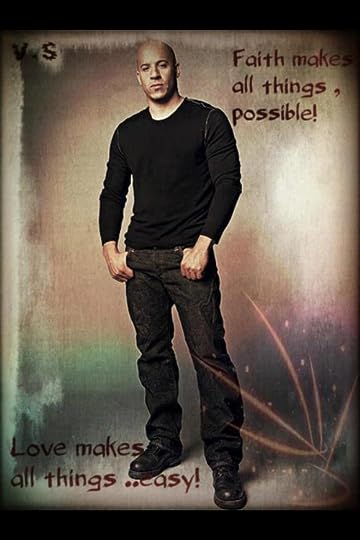 
I have a thing for Vin.
(In case that wasn't apparent. :) Riddick and Dom are two of my all-time favorite movie characters.)

Mod
After a hiatus longer than I prefer to think about, "Cinnamon & Nutmeg" has two new chapters up for your reading enjoyment.

Chapters 13 & 14 of 'Where I Want To Be' and I expect there will be another chapter update next weekend as well. Because F&F6 comes out December 10th, and I might be a little inspired by the prospect of new Dom/Brian slash videos. I have a lot of catching up to do to get through FF4 & 5 first.... Which could be good and bad, depending on your perspective.