This topic is about Jasper Fforde
37 views
What Else Are You Reading? > Jasper Fforde Reading From "Shades of Grey"

I don't know exactly where to post this and actually also not so sure what I'm trying to do here, but...

I'm kind of still high or something because I just came back from a reading with Jasper Fforde. I should be used to it by now from listening to the interviews with authors on S&L, but I'm always amazed at how quirky and interesting authors are in interviews.

And here am I grinning like an idiot because I have my picture takes with Jasper Fforde: 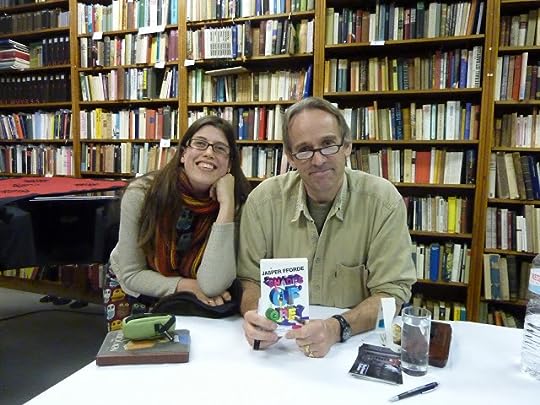 They were reading from "Shades of Grey", the German translation has just been published here. They had a German voice actor with him on stage who read a bit in German, plus they were doing a dialogue in German and English, which was a really cool idea and pretty neat to watch and listen to.

Mostly he talked about writing and the stories he made up in his head and how he came to be published.

A few interesting things he said:

- He apparently started with short stories in a way where he would imagine a highly unlikely and strange situation and tell himself to "write his way out of that". If I though there was any way I could still make NaNoWriMo I would now switch gears and do that because it sounded like a lot of fun.

- His Nusery Crime series originally came to be because he questioned the backstory of fairytales. (Why were Mummy and Daddy Bear sleeping in separate beds? There must have been some trouble in their marriage.)

- He had started writing in 1988 and was first published in 2001, so here goes hope for all dedicated writers. Never give up. (I find these stories motivating somehow, because I always assume that writers get published rightaway because they start out awesome, but apparently that's not the case. And it seems to be totally okay that it's not.)

Also, he signed my Kindle! I didn't have one of his books there, as the Thursday Next are stored away after our last move and I read Shades of Grey on the Kindle, so after about one minute of hesitating I thought, you know, what the hell. I'm just gonna let him sign my Kindle. Way cooler somehow. 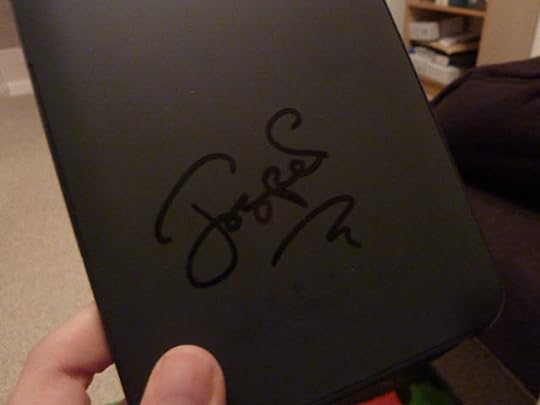 So, I guess what I'm trying to say is that it was really cool and if you get a chance to go one of his readings, do yourself a favor and go! (And sorry for just rattling on randomly. It was just really great, that's all.)

I like his books (esp SoG), and also his website is fun to look at. I would love to see him in person some day too. For now, I'll share your excitement vicariously.

He actually said that Shades of Grey doesn't sell as well as his other books, but that he gets the most posistive reviews for it - also by readers.

It sounds weird at first, but I get why. I think after our next read I'm going to pitch Shades of Grey as the book pick like crazy. It seems like a good S&L pick anyway and I'm pretty sure we haven't done a Jasper Fforde book so far.

I totally get your excitement, though. He is really likeable! I haven't read Shades of Gray yet, so I'd love to read it here with you guys.

When I met him (that was years ago by now, only the first four TN books were out and one Nursery Crime) I got a special stamp saying "first edition of an upgraded version in Austria". I love how he does quirky things like that and puts a stamp in every book he signs. One says "Eat more toast" and the others also go with what's in the story.

I haven't read it either, but I have a lovely hardback waiting on my shelve :-)
A friend og mine got him to sign a copy for me in Edinburgh, but I don't think he's been here in Denmark yet.
It's ok with big, silly grins when you meet your favourite writers, you should see the ones of me meeting Salman Rushdie and Paul Auster ;-)

Louise wrote:It's ok with big, silly grins when you meet your favourite writers, you should see the ones of me meeting Salman Rushdie and Paul Auster ;-)"

Man, I'm jealous again. Paul Auster? I'd kill to meet him in person. Even though I'd probably just stare like a goat.
I have one of those awkward pictures too, though, with Tad Williams.:)

I think you should just keep collecting author signatures on your Kindle, cool idea. And you look happy! I've only read The Eyre Affair, but that was with a book club, and it was a blast.

I don't know if I would say that Shades of Grey is different from The Eyre Affair. It's different on its own, because I seriously can't say that I have read anything quite like it, but I would say the same for the Thursday Next books, so maybe it's just classic Jasper Fforde in that it's completely unexpected.

And yes, I am now planning to get a few more signatures on the Kindle. If only Neil Gaiman would do more readings and if only he would do them in Europe. But I will look out more for readings by cool authors. The space is limited by how small a Kindle is so I will deserve it for special occasions.

Shades of Grey (other topics)