16 views
"IN GOD IS OUR TRUST" debuts this week!

I'm announcing the debut of "In God Is Our Trust," which concludes my Free Men and Dreamers saga.

What began with the idea of writing a historical romance novel novel turned into an eight-year adventure with American and LDS history, which is, after all, a more specific sliver of American history.

I wanted to know more about the generation that followed the Founding Fathers, and who became the heirs of their work and vision. They too had to defend the democratic ideals of America--during the War of 1812, so I researched that war, from the last days of the Founding Fathers to the prelude to war, the burning of Washington, the Battle of Baltimore and the rise of the Star-Spangled Banner. Books one through four, "Dark Sky at Dawn," "Twilight's Last Gleaming," "Dawn's Early Light," and "Oh, say Can You See?" cover these events.

Book five, "In God Is Our Trust" carries us through the aftermath of the war and the nation's recovery, to 1830 and the Restoration.

To my own amazement and awe, what I discovered was an incredible overlap between the forging of the nation through political affliction, and the preparation of a cradle for the coming Restoration.

I've tried to illustrate the passion and perplexities facing the choice generation tasked with these events by following fictional families throughout this period. They have become my second "family."

"In God Is our Trust" is hitting store shelves right now. I'll begin signings in December but I'm still looking for a few more reviewers/bloggers for the blog tour. If you're interested, please email me at lclewis2007@gmail.com. Any buzz would be greatly appreciated.

I'd love to have you add this great graphic to your web pages if you're intersted. The html code in embedded within it: 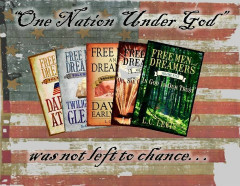 Thanks for the support, and good luck with your projects. I'm available to help by reading/reviewing other writers' books after the New Year.

Laurie,
Congratulations. I am going to put your books on my reading list. I teach History and love to read historical fiction. The books sound fascinating.The Mission

Thanks, Shaun. Now that this project is winding down I have time to read for pleasure again. Your book has my interest piqued.

Great. I hope you enjoy it. I originally submitted the manuscript to Cedar Fort. They liked it, but they wanted me to cut the manuscript down to 300 double spaced pages. That would've taken out my entire plot line. Consequently, I decided self-publish.

The Mission (other topics)