Q&A with Marita A. Hansen discussion

Mod
I was an artist way before becoming an author. My first job was as a Graphic Designer, but due to computers taking over the industry I moved away from it and instead got into gallery art as well as commissioned works, my biggest being a huge 4 piece canvas work done for the Dalmatian Cultural Society (Croatians) in Auckland, New Zealand. So, when it came to getting a cover made for Behind the Hoodand the second book in the series Behind the Tears I decided to do it myself.

So, how did I get the idea? Simple, for Behind the Hood Tama was probably the most distintive person in the book, plus he is the one that causes most of the trouble. Plus, I wanted to play with the title, including it in the image. So, I put Tama in a hoodie with part of his Moko-like tattoo showing. Therefore this gives the title a dual meaning, the literal one of behind Tama's hood (what is going on in his mind) as well as the things that are happening in this neighbourHOOD. And when one refers to a HOOD it usually means a rough place, which is what this town is viewed as in New Zealand. Apparently, Clendon Park (I call it Claydon for the story) is the roughest neighbourhood in New Zealand. I was genuinely shocked when I heard this as I thought it was a couple of smaller towns that seemed to always be on the news, where the Mongrel Mob and Black Power were more prevalent. But nope, when going for a job at the police 111 call-out I was told where I lived was the worst.

In relation Behind the Tears I decided to carry on putting the villain on the cover, and since Chaz had two teardrop tattoos under his left eye, bam! his image tied in with the title. However, for everyone outside of Australia and New Zealand, teardrop tattoos mean something different downunder. It is used to symbolise a pedophile, and is forced upon a person while in prison.

And by the end of Behind the Hood you realise why one of the big drug dealers is like his is, while he's so violent. There are always reasons for why people act like they do. And the second book is about him and his family, along with another family that they have close ties with. Then have Chaz get out of prison and you get a whole lot of trouble: revenge being just one of the motives as Chaz goes after Ash and Dante again, along with the other story line involving Sledge and Corey (of which I left clues in book 1).

Now, just to let you know there is a number of books for this series, the third being Behind the Lies. And this one finally has a female on the cover. If you've read Behind the Hood you will know about Leila. It is her image, and tendency to tell lies, that leads to the title and her major role in this story, involving Nike, Jess (who also ties in with the title) and Craven's crew.

In relation to the use of colour and typography on the covers: The knife-like grafitti styled title for Behind the Hood suited red, and due to Tama's bad habit of stabbing people it symbolises blood. Additionally red is an important colour in Maori culture.

For Behind the Tears, blue was the natural choice due to it's symbolisation: Tears/Water. And since Chaz has a number of tattoos it was natural for me to design the title as a tattoo and to incorprate more tears within it.

Behind the Lies will be done in green, and the typography for the title is planned as either a name on a necklace or a t-shirt design. At the moment I am completing another cover for a different series that will be done under a pseudo name, so once this is done I will get onto Leila's image.

I'll stop here. Let me know if you have any questions about covers and art.

Mod
Here's a photo of the large Dalmatian Cultural society painting that I mentioned in the above post. It's the size of a queen-sized bed, and is made up of 4 canvas works that details 150 years of the Dalmatian (from the coast of Croatia) people in New Zealand. It displays iconic images in a chronological order from when the first Dalmatian person came over on the ship depicted. Next is the gum-digger (of which my great uncle was one), then the winemaker (many a Dali (nickname) have cellars in their houses like my father), and then the stonemasons (as my grandfather was). In the second panel the iconic images depicted show a fruit grower, fishermen, a Fish&Chip shop owner and a traditional Dali barbecue. In the third panel (the one that gave me a back-ache, sending me to the physio) has the famous farewell of the Yugoslav ship the Radnik(Croatians/Dalis were known as Yugoslavs before the civil war), then the Kolo (a traditional Croatian dance that basically means a ring), and the first Dali soccer team in Auckland (my father is the goalie). In the final panel I have painted a tug of war at the annual Dali picnic, the Dalmatian Orchestra, the children's kolo (my daughter is seen here) and lastly bowls, a very popular sport for older Dali men. 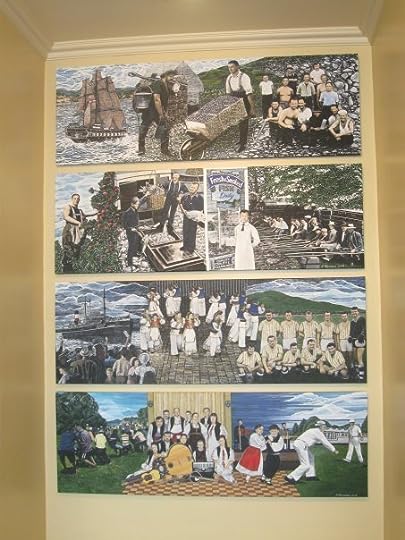 Mod
Here's a painting that I did of a Haka. It's the New Zealand Defence Force in Afghanistan (TGCRIB). 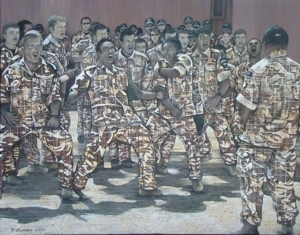 My mother is a botanical artist who has written several gardening books and who wrote for the Listener for 15 years..... 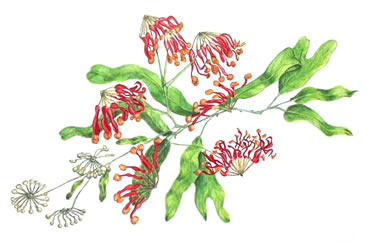 I really like that haka one Marita.....and the scope of the historical one is huge....you are GOOD!
Here is another of mum's... 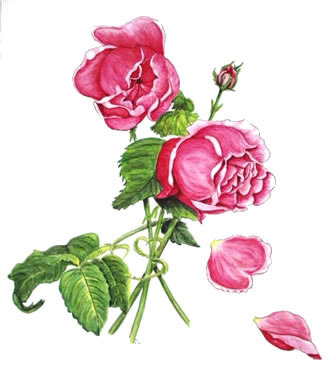 Mod
Those are both beautiful, Debbie. Your mother is very talented.

Mod
Here's a drawing that I did of Maia from Behind the Hood: 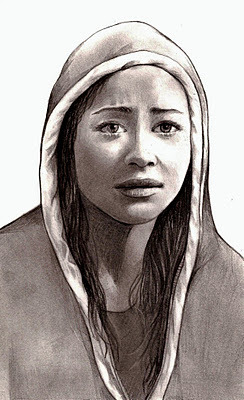 Wow! She reminds me a little of a girl I taught a couple of years ago....

Marita, that's gorgeous, and just how I pictured Maia. Will it be used for a cover?

Mod
Thanks. No, not for a cover. When I've done enough black and white pictures I will use them in a youtube video. I also want to use the drawings as references for the YA graphic novel version of Behind the Hood. Though, the drawings will be all in colour for that.

You are really good!

reply | flag *
message 14: by [deleted user] (new)
Dec 17, 2011 07:29AM
I want you to draw a picture of Nike. Pleaasssse :) He's my favourite. And since you've done Tama on the cover and Maia, it's got to be Nike's turn now. Then you can do the two oldest Rata brothers. I want to see their tattoos as I like your designs on Tama and the character for book 2. Plus, I like your description of Ash and Dante. They sound hot like Nike. I know I'm bossy. Now start drawing.

Mod
Angela wrote: "I want you to draw a picture of Nike. Pleaasssse :) He's my favourite. And since you've done Tama on the cover and Maia, it's got to be Nike's turn now. Then you can do the two oldest Rata brothers..."

Yes, Ma'am. Lol. Nike is proving to be a problem. I have an image I want to use, but it isn't the right pose or expression, so I have to do some more referencing, then combine them so I can do the sketch. But, I have found the right images for Mikey and Jess, and possibly Ash and Dante Rata (just deciding whether those two should be drawn together as they look so much alike). However, I want to hold off a little on those drawings since Nike really should be drawn first. I'll see.

Mod
Angela, I forgot to say. The guy on the cover of book 2, Behind the Pain (the prequel), is Tane Rata, Ash and Dante's father.

Just as long as Nike is drawn I'm happy :)

Cool. That is one impressive cover.

Mod
Here's Nike Daniels from Behind the Hood 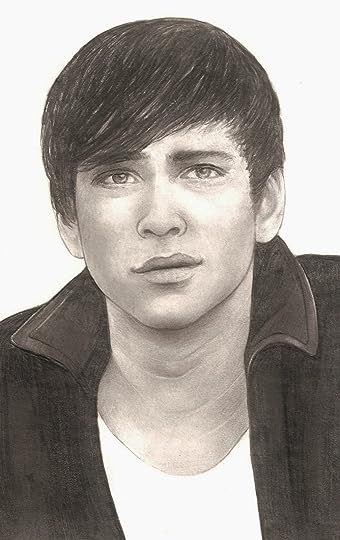 Amazing! I'm in awe over your talent... I've shown your work to my 16yr old son who is studying graphic art and he is also very impressed...

Mod
June wrote: "Amazing! I'm in awe over your talent... I've shown your work to my 16yr old son who is studying graphic art and he is also very impressed..."

I used to be a graphic artist before computers took over the field. You can find some of my other artworks on this site http://www.artslant.com/global/artist...

Yes, that is true most of what he is taught in class is computer based art design. Thanks for sharing your talent. We will definitely check out your other artwork on the artslant site.

Mod
Damn! Facing a dilemma with Behind the Pain. Looks like the cover and title are going to be changed, plus some elements to the story. Because it's a work in progress and not due to be published until August of this year the title may end up being called "Behind the Words" and with one of the Rata brothers on the front instead of the guy with the tattooed face. Though, I'm not letting the Behind the Pain cover go to waste as that book will still go ahead just with a different storyline. The reason for the cover and title change is because the book is looking more like it's turning into an edgy YA read due to the characters of Ash and Dante Rata. Stress! Just want to get onto book 3 as that storyline is mostly sorted and is so much easier to write.

Q&A with Marita A. Hansen