Subspecies: do I have to have one?

Class: Brawler- You have always had a knack for fighting. In the days of your youth you would train your body, or perhaps fight the local kids. You would occasionally use sticks or throw rocks, making you well rounded physically.

Past/Background: The Daughter of an Elven Blacksmith, Elundari was raised to do men's work, and for a short period of time, approxamatly the years before she hit puberty, she was treated and also acted like a boy, she was the only child of her parents and her mother died giving birth to Elundari. Her Father raised her alone, treating her with respect and had great pride in his daughter, even though she wasn't his son. Her father trained her in the art of sword weilding and she became very good at it. Most people thought, at least5 when they first met her, that she was a well raised young lady, but soon after they noticed that she was less.....feminin than she should have been, and since that made her unhappy because she didn't like being treated like a woman she started wearing mens cloths that her father had a tailor make for her. She normally puts her hair up under a cap to hide it's length and she can change her vopice to sound like a boy to blend in.

Personality: Elundari is a tomboyish girl with a knback for sharp tools and horseback riding. She acts like a boy and isn't afraid to show it. She hates being treated like a weak female and will end up putting the one who says that she was just-a-female's face into the ground with one solid strike to the Jaw. Though she acts tough on the outside, on the inside she is really a sweet girl with good intentions and wants to be accepted in society as she is.

Strengths: She is good at hiding emotions and is Very swift and light on her feet, able to move quietly and with out noise as she runs. She is a good singer as well, and can sing in both the Tenor (Male) range up to a Soprano (Female) range. She is fine with the sight of blood.

Weaknesses: Animals, she's always had a soft spot for animals, dogs and horses excpecially. She is not too fond of small and confined spaces, she hjas clausterophobia. She is bad with weapons such as daggers, but is great with a sword. She is bad with the defense of magic, though she tries to work on her faults to no avail. 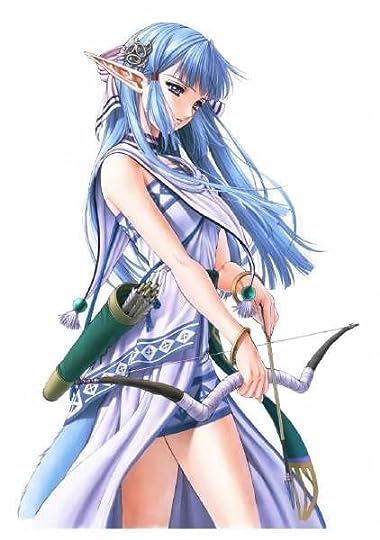 -Class-: Brawler
-Hair-: Maulda has long flowing naturally silver white hair. It goes whichever way, as she takes little care of it. It is usually tangled with dirt and leaves tucked away in it, unless there is a special occaision.
-Eyes-: Madula's left eye resembles a swirling mixture of hues found in the twilight hours, while her right eyes resembles the hazy fiery red and gold depths of hell. Of course, this is natural for her people. When she is angry or very deep in thought, they become a bright hazy green.

-Origin-: Madula comes from an uncharted island in the middle of the Pacific Ocean. Her tribe, the Natukan, eliminated all those who managed to find the island. The lush island is home to species of animas and plants thought to be extinict. On the island, there are several tribes that are either allied or warring. It's all very gruesome, what they do their enemies ad those who find the island.
-Language-: Madula mainly speaks her native tongue, but has learned multiple languages from people who had made it past turbulent waters. She has perfected her Russian, English, Spanish, French, and Chinese.

-Height-: 6'2"
-Weight/ Body Structure/ Physical Faults-: Madula weighs around 145 pounds, a solid ten of those added by firm ad tattooed bosoms. In fact, most of her body is tattooed. They are mostly swirls of different hues, but there are a few flowers mixed in, along with a large one on her left bosom. She isn't strapping with musculs, but has a sleek and athletic build, almost like a feline. She's build more for speed, which she is famous for among the tribes. She still rather curvy in the hip and bust area, but that doesn't very much affect her.

Madula has a heart shaped face, with high cheek bones and plump lips. She is tan from long exposure to the sun, but not to a point that it is deep. She has scars that cover large areas of her body. Most are situated around her face and neck. She also has a burn that waxes and wanes when she speaks. It's a deep red and goes around her right eye.
A picture: http://cdn.pimpmyspace.org/media/pms/... ((Ignore the horns and wings))
http://www.wallpaper4me.com/images/wa... ((Again, ignore the horns and wings))
-Parents/Elders/Guardians-: Madula's parents were brutally murdered when she was three before her eyes. Her grandmother is her guardian now, though she is doting due to her late mate's death.
-Sibling-: Madula has a twin brother, Madunis, and an adopted younger sister. They are all on speaking terms, but her younger sister adores her.
-Friends/Allies-: Madula doesn't have many friends, as she can't stand the girls placing themselves as unequals next to men. She has a cousin she would consider her best friend, Riza. Her tribe is also allied to Latika, the Mermandif, and the Ferdonas.
-Enemies-: Madula's tribe has many enemies, but her only enemy focus has to be the family that destroyed hers.
*Personality*
-Beliefs/Religion-: Madula has never believed in a higher power, but she has recently begun to question that.
-Hobbies-: Madula has tried her hand in many different things, but she enjoys running through the trees most. She also likes climbing and hunting, mainly because those are times that the wars and fighting are most noticeable. It helps her releive the stress of being joint chief with her brother.
-Loves-: Madula loves hunting. It doesn't matter what her objective is, she'll persue her prey like a rabid animal. She has been known to maime the peoples of rivalling tribes when they got in the way of hunting. She also loves open spaces. She feels most at home in a tropical area.
-Loathes-: Madula loathes seeing women lower themselves to mere objects just for men. She slips into a horrible fit when she sees such. She also hates modern transportation, damaging every single window when she encounters one.
-Fears-: Madula hates to admit it, but she fears modernization. It freaks her out more than anything.
-Talents-: Madula is the fastest on the island, something she doesn't think much of. She has never been outrun since she was ten. Most of the island's animals had adapted to her speed, thus making her work harder as well.
-Temperment-: Madula is usually fun loving and knowing, but sometimes she will take charge and be the leader that everyone needs. She can be cruel, escpecially when dealing out a punishment, but can also be merciful. She is easily angered, and is an unstoppable force whe pushed over the edge. She has a strong aversion to men, but regards them as equals. She has her moments of confusion and those of wisdom beyond her years.

*Past*
-Background-: Madula has hed a difficult life. At the age of three, she witnessed her parents untimely deaths with her twin brother. She recognized their killers as members of a rivalling tribe, one her tribe has never allied itself with in all their years. She and her brother were left in the care of their aunt, Merisolle. When she was seven, Madula watched yet another death as the rivalling tribe struck again. The Natukans were decimated to few after a raid, leaving my children orphaned. At that time, Madula found her younger sister, Ezra, as an little babe crying out. Madula took Ezra with her when she and her brother fled to their grandmother. When Madula and Madunis reached the age of 15, they became joint chiefs of the Natukans. They've been trying to find the Gritonias since then. But, she and her brother made their way to England with their younger sister on a hunch that their parents' murderers had gone there.

-Strengths-: Madula has a great sense of direction and is very good with strategies. She is also very fast.
-Weaknesses-: Madula has a tendency to stray from her task and make simple mistakes that could be avoided when she rushes into things.

-Occupation-: Madula recently arrived in London, so she has no occupation, expect she hunts in exchange for shelter.

*Species (you may only choose one): Shapeshifter

Subspecies (if you have one): Prefers the form of a Cat or a Wolf

*Class (Brawler, Adept, or none yet)**: Brawler

Past/Background: Abandoned when she was a Child, Jasmine has had a life of hardships trying to stay alive on her own. She Has a knack for herbs and is an excellent fighter. She lives on her own in the forest and knows her way around it like the back of her hand, or so she thinks, she has never once gotten lost there. She liked to talk with the Fairies and the other creatures in the forest for company and they taight her to live off of the land. She is very intellectual and is litterate(She can Read and write) from watching classes from windows of the school when she was in a bird form.

Personality: Jasmine is a sweet girl with a kind heart. She is very protective of the ones she cares about and she will stop at nothing to protect them. She is very smart and can figure anything out on her own. Jasmine is also very strong and loves to spar with other creatures of the forest to train.

Strengths: Hand to Hand combat, Weaponry(Prefers a bow and Arrow and a Sword as well, carrying them around constantly.) Very Agile and graceful.

Weaknesses: Trying to beat someone you know personally is very tough, but even tougher for Jasmine, because she cannot betray a friend. She is very succeptable to the magic such as darkness and illusion, but is able to use her nose. 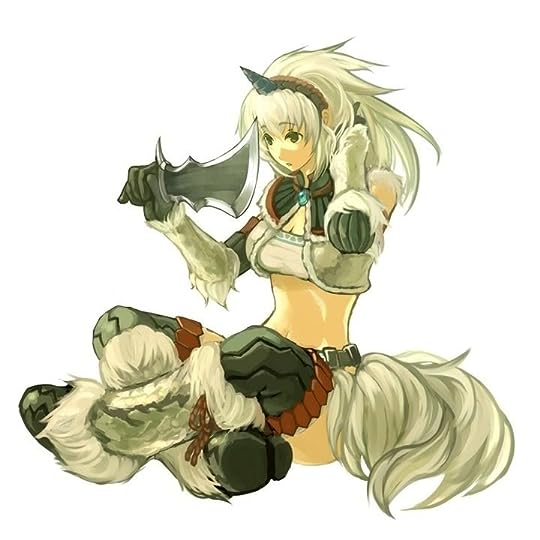 *Name: Arrianna
*Age: 17
*Gender: f
*Species (you may only choose one): elf
Subspecies (if you have one):
*Class (Brawler, Adept, or none yet)**: adept
Sexual Orientation: male
Occupation: cooks,
Past/Background: she's an orphan her parents died when she was 2 months old, has no relatives
Personality: quirky, but soo silent. you have to warm up to her before she lets you get to know her
Strengths: confusing people, listening, finding people, making meals from nothing and singing
Weaknesses: hurting anybody
Weapons: a dagger 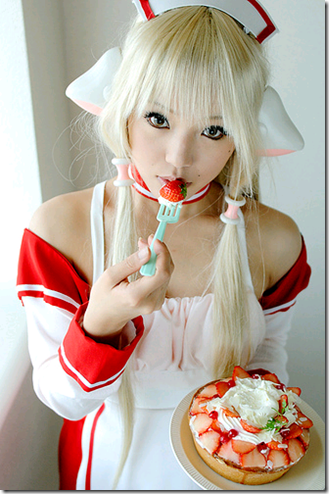 where the little white things are her ears are there