Mod
One day the world started falling. Not all of it fell, 927 islands stayed suspended where the world once was. If you fall of your island, you fall into the real world, fall to your death. The only way to get to each land is by air ship, and to do that, you have to avoid *AIR PIRATES*. There's also air bikes of course, motorcycles of the sky, but you'd have to stop and refuel at each island. The general sense of islands seemed to go back to the pirate days, in their futuristic way, and technology had to keep up, so it's normal to see guns next to plasma swords. So, all goes in the new steam punk universe.

Take it away, Ninja!

Mod
Every time I make you a roleplay!

You're like a fairy godmother that sees plotlines in need and makes them into Roleplays! 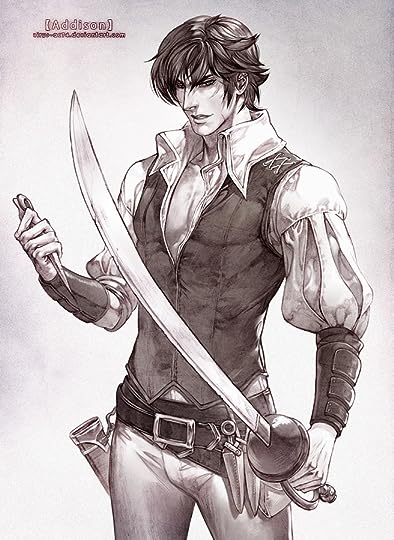 Personality: Calm, cool, collected, but a bit rough as well. He's a fearless air pirate captain
Weapon: Sword, gun, cannons(and I'm not talking about his arms XP jkjk) his ship.
Family/relationships: He has a younger sister, but doesn't see her much. He has very loose ties with his family. He has his crew that he trusts. He knew them all previously before they became his crew so he knows he can trust them to an extent. He's widely feared for his stealthy actions and incredible sword-fighting skills.
Other:He sails the Wolf Storm(cuz he's the captain) among the clouds and pillages the homes of rich families. 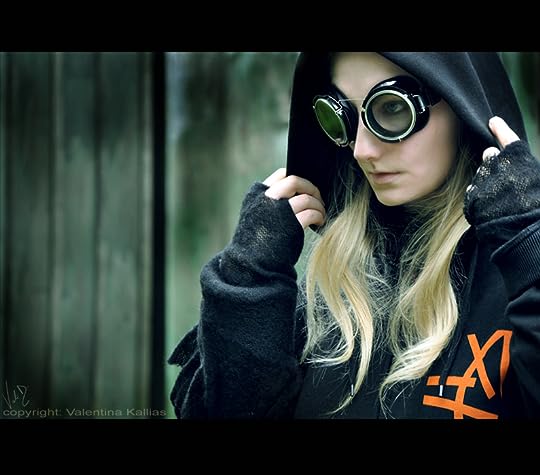 Personality: She's a curious, determined, young girl. She's more interested in mechanics than she is in boys and wants to be one of the best female mechanics out there. She's a risk taker and pretty independent for being so young. She lets her goal dictate her decisions a lot of the times, but she still has her moments when she acts like the child she is.
Weapon: None. She's 14!!!
Family/relationships: Her older brother it Damion, captain of the Wolf Storm. She rarely sees him, but really looks up to him despite her mother's objections. Her mother is gone a lot of the day working, doing domestic jobs as she was never gifted as a mechanic or much else that was appropriate for the era. This gives Tara a lot of time to explore the town or tinker on her own.
Other: Tara sometimes visits a female engineer to pick up some tips of the trade. She loves to eat also... her stomach is a bottomless pit.

Name: Meriko (Meri)
Age: 18
Gender: female
Appearance: http://www.ittybittyevilkitty.com/ibe... (no eyepatch though)
Personality: A little cold and calculating, with a little icyness towards others, but good natured. She's not a their of the rich, but a person of the people, a leader when she needs to be, but in the background when she isn't needed.
Weapon: Stilleto blade, belonged to mother.
Family: Her mother was killed by pirates, after her father became one as well. She wasn't scared for life and completely against pirates as most would suspect, but actually became one. Her crew is her family, and as captin, she has a little more control over said family, able to keep them close.
Other: Captin of The Blooming Rose 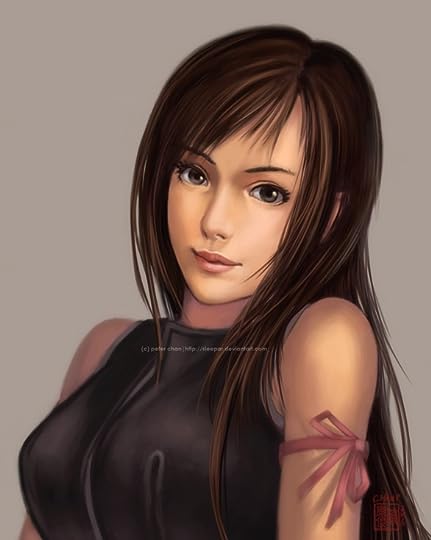 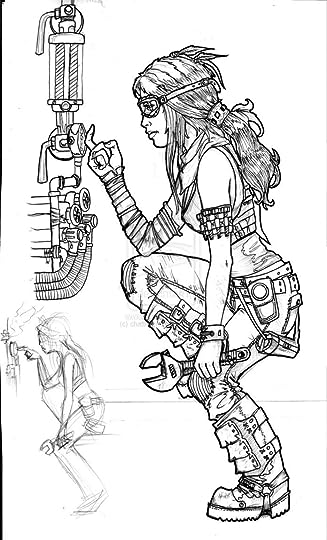 Personality: Spunky. She can be sweet, she can be sour, depending on the person and the kind of day she is having. She is very proud and a bit on a high horse because she is a female engineer and a good one at that. She stays in her workshop practically 24/7 and doesn't get out much, but she's fine with it because she considers her inventions her babies.
Weapon: gun
Family/relation ships: She doesn't have parents anymore since one day they were heading to another island to visit her cousins when their ship was looted and shot down by some pirates from a ship called Black Thorn. Tara visits her from time to time and she enjoys it. She thinks of her like a younger sister.
Other: When she's angry enough, she will beat someone with her wrench.

Personality: Spunky. She can be sweet, she can be sour, depending on the person and the kind of day she is having. She is ver..."

Name: Jem
Age: 16
Gender: male
Appearance: http://img-cache.cdn.gaiaonline.com/c... Except he has a couple scars along his wrists, arms, and neck.
Personality: Kind of shy and mild mannered, but not afraid to fight. He sees the world differently, not for the better. Always ready to cross a line.
Weapon: Either a gun, which he conceals, or his wrench.
Family/relation ships: He's a freelance mechanic that doesn't mind where he works, just as long as you don't try to kill him.
Other: Has been in a lot of fights, due to his skills.

Dawnlight Fire (WOODSTOCK!) wrote:It's TIFA!!!! *cough* Geek mode over.... :D
Haha you should make Cloud or Zack and they can be Best Friends XD well... though she might not like Zack :P

I doubt I could think of one as awesome as Cloud... um... Landon? maybe he could just go by a nickname or something?

just a couple, i can look for more if u want

I think Tifa and Cloud are about the same age right? *shrug*

Name: Caelum
Age: 22
Gender: Male
Appearance: http://fc02.deviantart.net/fs70/f/201...
Personality: Very solemn and quiet, constantly living in the past yet trying to ignore it. He does what he can, works hard at everything, and can easily risk his life. Inside he doesn't really care about life, but there must be something in him that wants to live because he fights like heck to stay alive.... Can be really sweet and thoughtful of others.
Weapon: Of course.... (drum roll).... The Buster sword!!!! http://fc07.deviantart.net/fs28/f/200... A lot'o history behind this piece of steel....
Relationships: None really, is friends with Ariana.
Other: (Ya, I was lazy and decided to just do a total and complete profile of Cloud instead of making up stuff.... But that's okay. ^-^) His bike! It flies! -> http://kingog.home.comcast.net/~kingo...

Dawnlight Fire (WOODSTOCK!) wrote: "I think Tifa and Cloud are about the same age right? *shrug*

ya probably :) haha yay! back together again. Aw, everytime I see the sword I think of Zack and his epic death.:'( it was so sad

i mainly use deviantart and google images

oh goodness this is going to turn into a final fantasy rp >.<


I know!!!! Crisis Core was the first FF game I ever played..... I looooooved Zack!! He's like the ultimate guy!!!!!!!!!!! Then I watched Advent children and I'm like WHA? I had no idea CC was an add on story to the actual FF7. Then I did Dirge of Ceberus, and read a few wiki pages... Now I basically know all about FF7. ^-^ I kinda hated how Cloud went from all innocent and sweet, to like mentally damaged and lonely... :P I'm playing FF 7 right now tho. :D

DragonDreamer wrote: "oh goodness this is going to turn into a final fantasy rp >.<"

Ha, yeah. We should ask them to make one!

cool :D honestly, I haven't really played FF games. I'm a hardcore kingdom hearts fan though :P my sister was recommended ffx by someone and so we got that(so I love Tidus XD... and Auron) and that's when i learned more about it. I watched the crisis core cutscenes though cuz my friend said i haven't lived if i didn't see them. plus i watched advent children

YOU NEED TO PLAY THEM!! Believe me on this. I watched the walkthrough of allllll the KH games on YouTube, but I played CC. The experience is truely different, you get into it more and see more and understand more if you actually playthe game. I also saw the walkthrough of FFX and FFX2..... It's a biiiiiiig difference....

I know it's different, but I don't have the $ to buy them all :/ plus I'm not too keen on the fighting style in the game because in kingdom hearts you can just attack and attack when you want, but in ff you have to wait ur turn or something and that would be annoying. But I do understand what ur saying and believe in it, but i don't think i can.

and the same can be said for KH :P definitely different to play than just watched. I watched the scenes on youtube cuz i didn't have a psp, but then my friend lent me his and his game and it was sooooo AMAZING

No you don't. That's with the older FF games. In Crisis Core it's like KH, and I believe that it's the same way with FFX too.

Yeah, we don't have the money either.... That's why I use YouTube to watch the walkthroughs..... But I kinda wish I could mail CC to ya so you could play it. :D

that's the thing though. i didn't like how ffx fought cuz it wasn't like kh at all :( haha well my friend might have it actually. What gaming system is it for?

Appearance: http://i387.photobucket.com/albums/oo...
Personality: Madula seems like a sweet and nice girl on the outside, but she is quite deadly. Her need to be alone is only a way of defending others from her anger. Most people have learned that after some time with the air biker.

Weapons: A pistol and a plasma sword.
Relationships: None at the moment, she's managed to distance herself quite a bit.
Other:

Mod
Oh, I have to make a character before the roleplay gets too far without me.

...Right after I do dishes.

Mod
Name: Brandy
Age: 21
Gender: Female
Appearance: Later, I'm in school, heh. (:
Personality: She's actually rather nice, sweet, but something about her is off, like she's hiding something.
Weapon: Supposedly she doesn't carry any, or she says she doesn't.
Family/relation ships: Her parents live on one of the islands, she lives on a different one. She doesn't see them much.
Other: She only occasionally is in the air. Mostly she stays on the docks and cares for people as they land.

Name: Cy
Age: 14
Gender: Male
Appearance: Later. Still in class.
Personality: He thinks he's bigger and braver than he really is, wants to grow up to be a pirate.
Weapon: A small pistol his dad gave him before he died.
Family/relation ships: He has no family anymore. He just lives to be a pirate.
Other: Stowaway on one of the ships. (Whoever wants him. :D)

Cy can stow away on Damion's ship if you want???

Mod
Ahaha I'd been planning on that, actually, I just never got around to asking you. I think I was waiting for the right time or something. But we'll go with that. Thanks DD!