Mod
Uhm... does anyone besides me wonder if John McCain and Joe the Plumber are secret lovers?

Mod
there is a strong possibility. Or so my sources say.

Mod
yeah, next weeks big scandal will entail McCain, blow jobs and a pipe wrench, you connect the dots.

How dare you take Joe The Plumber's name in vain. You wil suffer a thousand failed flushes.

I feel for the guy. I would hate to think we're sending the message that we shouldn't put tough questions to our pols.

Mod
don't you mean tough dumps to the pipes?

LOL..yeah like the ones where I need to take a spade n chop em up just to get em down in 3 flushes. Oh look...I'm getting all misty at the thought.

Mod
Ahhh... the good o'l tri-flush, it should be an olympic event.

I feel badly for anyone actually named Joe who is actually a plumber this morning. If I were him I'd stay in bed before the news crews find him.

Mod
my daughter made herself a t-shirt last night to wear to school this morning. it says:

"I voted for Joe the Plumber"

A Republican plant at an Obama Rally?

Mod
What really struck me was how many times McCain kept bringing up Joe the Plumber throughout the debate. It was like he was obsessed with the man. Eventually I just assumed he was madly in love with him and sending him secret signals throughout the debate as his way of courting Joe. I really wanted to tell him to get a room.

And now Joe's playing coy and hard to get:

I think I prefer winking to this: 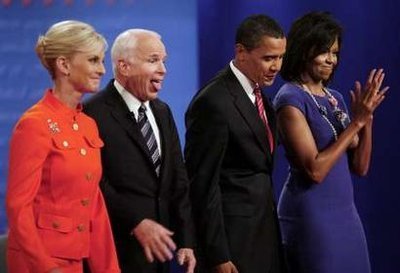 BTW, did anyone else think Schieffer did the best job as moderator? Maybe it was just the format, but he seemed to be able to get the candidates to engage each other without having to ask them to (a la Lehrer.) Except of course when he used the phrase "climate control" in a question that ended up being about energy independence.

Mod
Schieffer just spends too much time in his Lexus. But yes, I thought the candidates engaged with each other much more this debate. I don't know if it was due to the moderator, or just the fact that it was the last debate. Interesting.

I didn't even notice the other three, but now that you mention it do you think Michelle Obama and the set decorator got together before the debate?

Mod
I love how Cindy McCain is a stick figure in what amounts to a bright red military jacket, and Michelle Obama is wearing a dress that is almost purple that hugs her well-endowed booty. Ah, there, in a nut shell, are the differences between the two candidates.

I also love how Joe Wurzelbacher is conviced that Obama is leading us toward "socialism" and that even though he makes far less than $250k per year he is certain that Obama will raise his taxes, regardless of the fact that Obama has laid out his plans very clearly and coherently and is planning on doing nothing close to either of those things. And yet, the fact that the US government just, in essence, made a gigantic property purchase of private lands with this economic bailout which benefits first of all the rich bankers doesn't seem to bother then man at all. More evidence that people see and hear what they want to see and hear.

Mod
indeed. photography is a cruel mistress. and capricious.

Well that does it...guess his opinion isn't worth the turd I just flushed.

That's right Sherri it is - just like everyone else's. He was at the right spot at the right time, and that just seems to bother some people.

It seem's Ohio doesn't have a requirement that a plummer be licensed. And perhaps, he'd rather not be part of a union. And if his name is Samuel J Wurzelbacher and prefers to be known as Joe, that's pretty much his business. Lots of folks go by their middle name.

Owing taxes is not fun. I've been there, some folks here might understand that it's not an indication of a criminal personality.

Mod
I just knew you'd get your knickers in a twist over this thread, NB. 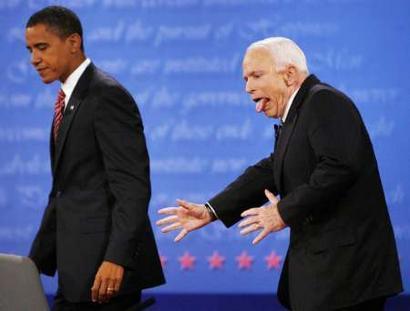 I could not resist posting this picture.

Indeed he did, didn't he?

Nick brought the laughs as usual!

Why is his tongue hanging out in every picture I see of him lately? And, is his wife about 50 years younger than him or what?

Mod
omg... I keep thinking McCain is secretly an alien lizard person. What is with the tongue action? It's freaking me out man!

Mod
no kidding, right? talk about being sorry one has taken a risk in public. oy.

From the article:
"Unlike some other states, Ohio does not have a formal statewide licensing system for plumbers"

So no, he does not need a license to continue his business. It's unclear if he would need one should he seek to buy the business which currently employs him. Whatever that case is, Joe The Plumber is already studying to gain his contractor's license. A contractor's license is not the holy grail. I have some first hand experience in this. My question to to the Axis is: who here wishes him good luck, or ill luck?

So who's to say anyone is working within a certain jurisdicition? Sure, he lives in a specific locale, that does not mean he actually works there. C'mon folks...this is getting silly. I have first hand knowledge of how such a business operates. To think they're gonna stick within a specific geographic locale is...nutty. I'm not covering for the operation JtP works for, but it's quite easy to work legally within the rules as established by the state of Ohio. Not rocket science folks.

Well, if nothing else I think we can all agree the second word in the sobriquet "Joe the Plumber" is in fact accurate.

No BunnWat... it should be obvious by now that I've a mad crush on you.
So, in retrospect, I was not arguing with you. I was responding to the article. I know better than to challenge you directly, unless of course you happen to be wearing a snappy pair of heals. In that case I'm quite rightly asking to be disciplined.

Mod
NB... if you were arguing with the article, why did you ask Axis who here wishes him good luck or ill? That sounded pretty much like you had some kind of bone to pick with someone here.

As for Joe himself, personally I don't wish him ill, but after listening to him being interviewed I have to say that I think he's kind of a bone head. But whatever, party on with your bad self, Joe. May your life of plumbing be prosperous.

And may John McCain's true love for you never die.

And it seems he might still need a license to work as an apprentice or journeyman in Toledo.

Something disturbing in all this. Notice how in one day, the media conversation changed from a discussion of Obama's tax plan to "Joe's not his real name", "he owes taxes", "he doesn't have a license"? How is that relevant? It's one thing to go after a person running for public office ala Palin, but to attempt to intimidate into silence a private citizen for the high crime of challenging the media darling candidate is nothing short of gestapo tactics by media brownshirts. Not a good precedent at all.

Also, I once saw a picture of John McCain coming out of a German Restaurant. You know who else liked to frequent German restaurants? Nazis, that's who.

Mod
The media DID go a little nuts about Joe the Plumber. I laughed my head off over how it was portrayed on The Daily Show the other night:

Joe the Plumber on The Daily Show

"That'll teach you to unwittingly come to our attention!"

No, wait, that wasn't the part I laughed so hard at. It was toward the end of this piece:Word War III, at the 7:02 mark and onward.
"And I'm standing in his front yard!"

It's not. I'm just pointing out how easy, yet inappropriate, it is to make a Nazi comparison.

@NB ... I can't escape the fact that had McCain not brought him to the public dance, his privacy would not be so challenged. It doesn't help that he apparently didn't have a real clue about what he was talking about before he shot his mouth off in a public forum.

Everybody has a right to privacy ... they just can't hide behind that what their public behavior blows-up so dramatically.

ummmm "mythical character"? You're gonna have to explain that one in a little more detail.

It scores political points because it exposes some truths. Obama's running around the country now saying he doesn't know many plumbers making 250,000 or more. Fact is many do. I've got family that do. The vast majority of small businesses employing 7 or more people make over $250,000 ..about 70%. In tough times like these, where big corporations are laying off, it's not unusual to see 100% of new job creation come from the small business sector. That's the reality of Joe the Plumber. And I gotta tell, my plumber relative is pretty scared of what Obama's "share the wealth" tax plan is gonna do to his business.

A couple of things, he probably should have a journeyman's or apprentice's license if he's working under a plumber. That is from the state's DBPR (department of business and professional regulation).

Second, I would have a tad more sympathy had he not inserted himself into the situation as a Republican plant. He was never undecided - he admits that now, so the whole thing was a ruse to try and trip Obama up on his tax plan.

The narrative changed NotBill, because that's what a good, disciplined campaign can do. One day you're talking about X and the next you're talking about Y. And if they're really good, you're left wondering how the conversation changed, so I'm sure Obama's campaign will take that as a compliment.

Gee NotBill, I thought anecdotal evidence counted for little. I've got relatives, too, and they are going to see 3xs the tax credits under Obama than they would under McCain. So, if we're voting self interest, then I gotta go with Obama.

But I had a talk with an accountant this morning, about plumbers, taxes and what they're making. A lot of them are ignoring the 50% healthcare credit they'll get under Obama that will effectively neutralize any tax increases and furthermore will actually bring their costs down. In fact, the accountant explained to me that the theoretical plumber's taxes will only increase on the portion OVER $250,000. In other words, his taxes will remain the same up to $250,000 and he'll be taxed over and above that. The average increase, btw, was about $773.00 a year in taxes. Hardly enough to require a lay off of employees or prevent a small business owner from putting food on the table...

It's always amazed me that even $50 in increased taxes has the Right screaming. I guess they don't like roads, police, post offices or libraries much. Nor, apparently, do they care for fire services. Hmm.

How's that for anecdotal?