Mod
Name:
Age:
Gender:
Demigod or Other:
Power (if you have any):
God or Goddess your related too (if you have one:
Weapon:
Crush:
Other:

Name: Mia
Age: 15
Gender: Female
Demigod or Other: Demigod
Power (if you have any): Control over dead
God or Goddess your related too (if you have one:) Hades
Weapon: Sword
Crush:
Other:

Name: Kohaku
Age: 16
Gender: Male
DEmigod or Other: Demigod
Power: He can make any armory and has control over fire.
Godly Parent: Hephaestus
Personality: He doesn't speak that much since he has many problems on his sleeves. He has a slit temper which makes it seem he he is harmful but he's not once you get to know him. It seems he doesn't like his extra ability of being able to control fire. He loved to build anything from scrape but he doesn't like the fact that he has the fire ability. Kohaku doesn't want to know anything about his father and why he was gifted with an ability to hurt others if they make him mad. He does have a soft side but he rarely shows it to anyone. He is a caring person but his expressions always looks cold.
Appearance: Kohaku
He has brown hair and his eyes are brown, almond color. He wears that jacket to keep himself from the flames and he is also 5' 5" tall.
Greek or Roman: Greek
History: When Kohaku was little, he was friendly and nice to many people. But when he turned six, he found out he was a fire user when he set his vacation house on fire. To cover the story up, his mother said that one of the cooking pans were close to the sink setting the whole place into flames. When he found out how dangerous he was, he wished that he was never born. Kohaku then turned his friends down and then was home schooled since he didn't want to hurt anyone. His mother knew that Kohaku wasn't an ordinary child so she sent him to Camp Half-Blood right away. Kohaku wasn't claimed yet by his father until the second summer he came back to Camp. He has been in Camp Half- Blood ever since he was seven. He knows Kami because their mothers are good college friends.
Crush: None
Other: Kohaku is very skilled in making weapons and shields. He also tries to make different inventions. It seems he still needs to control fire a little bit more. He is a head councilor for his cabin.

Name: Kamiko (Kami)
Age: 15
Gender: Female
Demigod or Other: Demigod
Power(s): Anyone who listens to her poetry or music can be in a trance when she wants them too but usually she doesn't do it.
Godly Parent: Apollo
Personality: Kamiko is always cheerful child. She can never be angry at anyone. It is said that Kami has a split personality so she hides her angry side to anyone. She becomes serious when they play capture the flag since she likes to win. She is very good in music but doesn't like to sing in front of anyone. She is also a shy girl but at Apollo's cabin she always has a fun time talking to her half-siblings. She thinks some of her siblings annoying but she has to live with them. She is also very poetic but rather play her instrument instead. She is also intelligent but keeps a lot of secrets to herself. She says that secrets should be kept to yourself if you do not want to hurt others.
Appearance:

Greek or Roman: Greek
History: Her mother is a writer and published a book of poems that her mother made when she was in college. Kami learned more of her poetry from her mother and also never knew her father was a Greek God. Her mother told Kami that her father was Apollo when she was seven. She was sent to Camp Half-Blood when she was eight since her mother knew she couldn't hide Kami anymore. Kami learned archery at the Camp and became friends with her half-siblings.
Other: Kamiko loved being alone at times since she always had a noisy cabin. She sometimes climbs the trees watching the lake.

Name: Atlanta
Age: 15
Gender: Female
Demigod or Other: Demigod
Power (if you have any): none, but she is very skilled with a sword
God or Goddess your related too (if you have one: Athena
Weapon: Sword, but is very good with a bow
Crush: none
Other:

Name: Maegan Utau
Age: 16
Gender: female
Demigod or Other: demigod
Power (if you have any): Can charm people with her voice and put them in a trance(Like people speaking,if youve read the goose girl.
God or Goddess your related too (if you have one: Aphrodite
Appearance: http://images.wikia.com/shugochara/im...
Weapon: A dagger
Crush: open
Other:

Name: Roze
Age: 16
Gender: F
Demigod or Other: Demigod
Power (if you have any): Can control people's dreams, and her own. She is still getting used to it, and as such, if she tries, she tends to give people nightmares. The dreams she gives them are so real, they think that they are actually happening. She accidentally drove an old friend suicidal by experimenting, and having him dream his family and friends had all been murdered by him.
God or Goddess your related too (if you have one: Daughter of Oneiroi, god of dreams.
Weapon: A double-edged sword.
Looks: 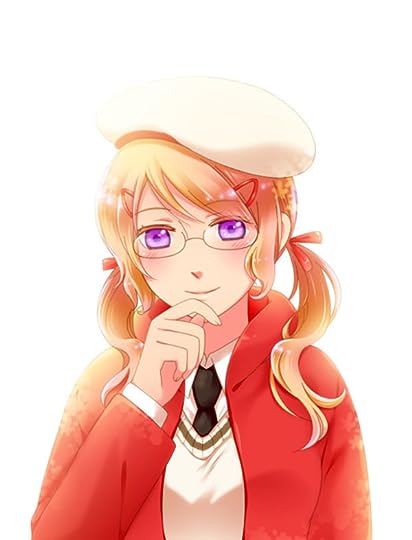 Crush: none yet
Other: Almost invisible.