28 views
AUTHOR PROMOTIONS > An area for readers to help authors.

Mod
Readers, let authors know that you are interested. Do you run a book blog? Are you willing to do guest posts? Or do you want to do a review or interview? Give a shout, and let authors know how to contact you.

Mod
O.k. authors, I am willing to put up a quest post on my blog for anyone that is willing. Write about what ever you want and I will post it to my blog to help promote you and your books. http://authorcvhunt.blogspot.com

Hi all,
I am looking for reviewers for my book Foehammer.
It features my own versions of Vampires, Werewolves and Zombies - all with a new twist, so should be perfect for this group!

Here's the info
Contact me if you run a blog and would like signed giveaway copies and interviews.

Here's the blurb and info:

Twenty years from now a virus breaks out in a couple of Arctic naval bases, and then, even more strangely, inside the White House. The guards become animated corpses, and rescue teams are rendered helpless by a mysterious trance effect. Underpaid academic Dr. Weaver has documents that refer to something similar happening in the time of Christ, and a group of billionaires seek him out and immediately set him to work. With the help of a super-hacker, he manages to track down a veteran who’s not susceptible to mind control. But this Sean “Jester” Solberg character is a wild card—an aggressive loner who lives with the immigrants outside the cities. The next recruit is even more unusual. Curtis Ferguson is the son of a couple of anthropologists and reportedly the world’s most powerful witch doctor. Into this bizarre, dysfunctional group is thrust Jodie Goodwin, a down-to-earth Texan girl with exceptional shooting skills. The newly formed team creep into the bunkers deep under the capital and encounter mankind’s ancient enemies. They end up fighting for survival and soon discover that their lives depend on the powers of the young, but untested, shaman.

Praise for Foehammer
'Quite frankly, if I could give this book a higher rating than 5, I would...I LOVE the characters, and I didn't want the book to end...I rarely get this excited for a book, but this one has me absolutely delighted.' - Support for Indie Authors
‘A whirlwind adventure, the kind I'd expect from a AAA action movie.’ – Amazon.com
‘Foehammer has all the elements of a successful supernatural thriller…’ - The Literary consultancy
‘Awesome read!’ - Amazon.co.uk
‘Taut, mature and hard-boiled. Reminiscent of William Gibson at his best.’- Amazon.com 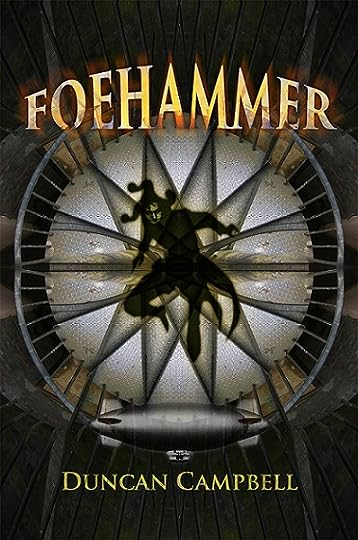 Hello everyone. I am currently looking for reviews and blog posts for my book Lipstick. It is a paranormal romance with zombies-but with snark.Erzabet BishopLipstick

Please email me at erzabetwrites@gmail.com and we can talk about formats and such.