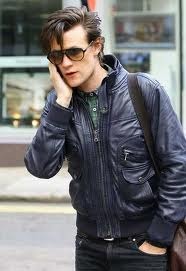 Personality:Assertive and outspoken - he is driven to lead. Excellent ability to understand difficult organizational problems and create solid solutions. Intelligent and well-informed, he excels at public speaking. He values knowledge and competence, and usually has little patience with inefficiency or disorganisation. Friendly, adaptable, action-oriented. Focused on immediate results. Living in the here-and-now, a risk-taker who lives a fast-paced lifestyle. Impatient with long explanations. Extremely loyal to his peers, but not usually respectful of laws and rules if they get in the way of getting things done. Great people skills. Logical, original, creative thinker. Can become very excited about theories and ideas. Exceptionally capable and driven to turn theories into clear understandings. Highly value knowledge, competence and logic. Hard to get to know well. Individualistic, having no interest in following others. Slightly self-centred.
History: TBD
Other:

Name: Tyson
Age: 19
Gender: Male
Rank: Assassin (Whenever needed. Otherwise, a Top Fighter)
Appearance:
http://images.wikia.com/onepiecefanfi...
Personality: Keeps to himself. His friends think he's a great guy, just sometimes misunderstood.
History: His father was a secret dealer with pirates. His father would obtain precious antiques from the pirates to sell them the government's secrets. Unfortunately, his father was a greedy man and told them false secrets. So they went to his house to collect some money, but he said, "Anything but that!" So, instead of money, they took something even more valuable: His children.
Crush: Open
Other: Twin brother to Jo

Name: Josephine (Jo for short)
Age: 19
Gender: Female
Rank: An even better Top Fighter than her brother!
Appearance:
http://fc08.deviantart.net/images3/i/...
Personality: Bubbly and fun to her friends. But if you get on her bad side, you may have earned an enemy for life. In a fight, she is the best in the seven seas.
History: Same as Tyson's.
Crush: Open
Other: Twin sister to Tyson

Name: Jacqueline
Age: 19
Gender: Female
Rank: none (used to be a captain)
Appearance: http://www.superkawaiimama.com.au/wp-...
Personality: stubborn, in no way girly, do not mess with her cuz you will regret it
History: Her ship sunk near a deserted island so now her and one other crew member survived
Crush: doesn't know too many people
Other: don't call her Jackie

Name: Eliot
Age: 18
Gender: Male
Rank: None (was the first mate)
Appearance: http://api.ning.com/files/zg5s*y8HrpG...
Personality: not to be messed with.
History: same as Jacqueline
Crush: none
Other: Call him Eli or else

Well, I won't be scared into changing someone I made up, because I have the right to use whatever name I wish. Plus, it's not her group. Plus, she can't "own" a name or something stupid like that.

I have a question. How did your charries get off the deserted island?

Mod
Off? To whom is the query directed?

She's talking to Marisa, except Marisa's charries haven't gotten off of their little personal island yet.

Name:Erin
Age:16
Gender:f
Rank:captens daughter(is that ok?)
Appearance: http://img1.lln.crunchyroll.com/i/spi...
Personality:Sarcastic, tough, hard to to be mean to without endin up with something broken, odd person to meet
History:She was three when she dissided to not be like the other girls. she didnt want to be girly and go to a high rank school so she went with her fathers ship Smithin.
Crush:Open
Other:nope oh but johns her dad.

Name: Tanki Avaida
Age: 19
Gender: Female
Rank: Watchman(of the Cutlass)
Appearance: http://tinyurl.com/3ljua4k
Personality: Tanki is very lively. She will talk to everyone and if anyone is troubled or hurt or anything, she'll try to help them. She is very good at keeping secrets and is really a go-to girl. But she will also talk back to orders if she feels they arent right. She loves to fight and is very tough. She is always willing to help. Tanki lives in the ropes. She will stay in teh ratails and ropes above the deck all day. Her favorite perch is the Bow Spirit. If anyways but her messes with her ropes(yes, HER ropes) she gets really mad. Tanki is very tough and loves to fight. She has a certain blood lust, meaning she kinda gets drunk off of blood. She she is very good in fights.
History: She was found floating in the water when she was 9 and ever since then she has been on the pirate ship. Although she switches ships whenever her current one gets captured by the authorities. She never gets caught.
Crush:
Other: Ummm, not much. She always carries a sword and gun with her and a few other varius weapons.

Name: Michael Wright
Age: 19
Gender: Male
Rank: rogue?
Appearance: A combination of these two pics. http://mob296.photobucket.com/albums/... and (The guy in the front) http://fsb.zedge.net/content/3/4/0/1/...
Personality: Warm, kind, and sort of quiet, loyal, smart, and would always protect his friends
History: to be rp'd
Crush: Open
Other:

Name:James Knox
Age:21
Gender:Male
Rank:Master gunner
Appearance: http://www.buddytv.com/articles/Docto...
Personality:James is a energetic and always looking for adventure he's the kind of person who loves fun. This is why he joined a pirate crew. He has a hot temper and does what he likes or thiks is best.James is very talented and smart but thinks he knows best.
History:James has always been living on the edge always looking for trouble even when he was a rich man in the city. He had it all in his past life a wonderful home,marriage and plenty of money but he felt bored. So to get out of his boring world he joined a crew and sent his wife packing (he abondoned her on a desert island). James has never regreted his decession and loves his new adventurous life.
Crush:Open
Other:His saying:"Im alright at doing good but im much better at doing wrong"

Name:Alexandria
Age:15
Gender:Female
Rank:Stowaway
Appearance: http://2.bp.blogspot.com/_V-vy8pJtuOY...
Personality:Alexandria is a very quiet girl who keeps to herself. She is a very shy but kind person especially to people she likes. Alexandria is very smart and charming always trying to learn new things.
History:Alexandria grew up on the streets barley surviving.She made a living by stealing what she could on the street. But wanting a better life she managed to sneak onto a ship knowing it was a risk she was taking. But she what she didn't know was that the ship she was a stowaway on was a pirate ship. She finally realised this when they set sail but it was already to late.
Crush:Open
Other:Is still hiding on the ship

Age: Claims to be nineteen, though she has never provided proof toward that. 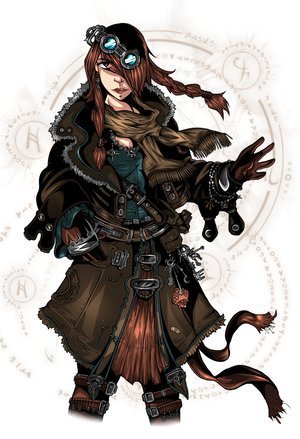 Cyrus has crimson brown hair that when allowed down reaches her lower back. She often has it tied up in two braids with few strand left loose to curtain her face when needed. She has sea blue eyes that match the color of the Caribbean waters she masters. She is a slightly taller height than most girls and this has assisted her intimidating demeanor. She is most often wearing her captain trench coat and avian goggles, that if not placed over her eyes are most often perched atop her head. In a vicious battle she lost her right hand, having been replaced by a mechanical one. This defect has not fazed her fighting ability or handicapped her in any way. She has strong features that help her to lead by appearance. She has many concealed weaponry within her coat and high leather buckled boots. She has been confined to the seas, supposedly by the thick metal cuffs that are laced around her wrists. She also has a wide array of charms laced around her waist and some jewelry that she took a liking to that gives a rouge gypsy look to her.

Personality: Cyrus does have the personality of a captain. She is strong and remains calm in fights and storms. Unlike some captains she participates in much of the work of steering and maintaining her ship. She believes if one is to call them self captain they must earn their ship throughout their life. She gives herself no more rations than her workers and lives in the same conditions, though she does not trust one to board her ship easily. She is known for her vicious and brutal nature in battle. She will easily kill anyone when they fit her criteria for one worthy of death. She does not often take people captive and will only engage in battle with ships of the unworthy. She is protective of her ship and crew and will never compromise her caution for any outsiders.

History: Cyrus has always lived among pirates. Her father was a pirate famous for his blood thirst. She grew up on a ship known as the Damned Saber. In a ruthless storm both her father and her father's ship were swallowed by the storm she was set adrift on a single plank of wood that had survived. She washed ashore a week later, starved of both food and water. Some say the waters claimed her sanity as they claimed her father. She dedicated her life to the life of a pirate, training to be as her father once was. She became famous as one of the youngest ship owners, deemed even more impressive considering she was a girl. She claimed her own ship known as the Screaming Tyrant. She has her entire lifetime of experience in sailing and is known as the wrath of the sea at many ports. Not much else is known of her other than that.

Weapon(s): Her weaponry consists mainly of her sword and her gun, otherwise she will take on many short term weapons.
Sword:(view spoiler)[ 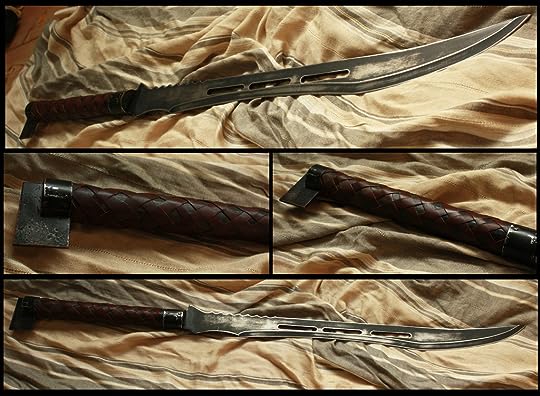 Her sword was forged from the metal hull of her father's ship that was demolish in the raging storm, famously known as The wrath of Poseidon. The sword hilt is weaved from the leather of the vest given to her by her father. The sword is designed to be razor sharp and Cyrus can often be found sharpening her sword to retain its razor sharp design. At the other end is an equally sharp battle ax. She has trained her entire life to use this specific sword and it is fitted to her exactly, if it were to be taken it is too complicated to avoid the ax at the other end for any to wield it aside from her. (hide spoiler)]
Gun: (view spoiler)[ 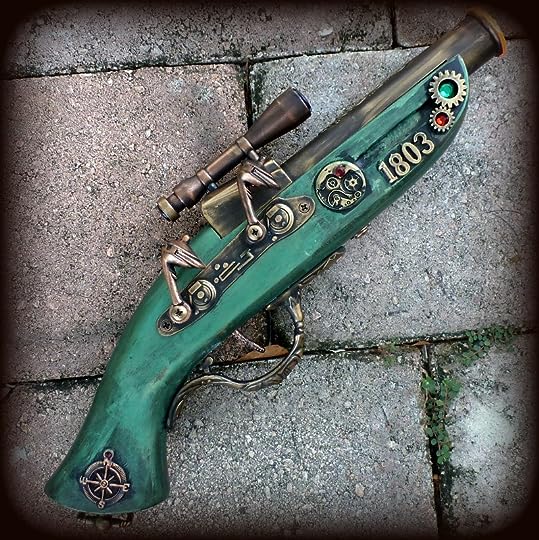 This diamond encrusted gun was the weapon of her father, reinforced and modified over the years with new technology and perks. She has mastered the art of rapid reloading and sniping even with the badly conditioned weapons. (hide spoiler)]

Other: She is captain of The Screaming Tyrant. Though the ship looks decrepit, it has survived through many storms and is described as the unsinkable ship.
(view spoiler)[ 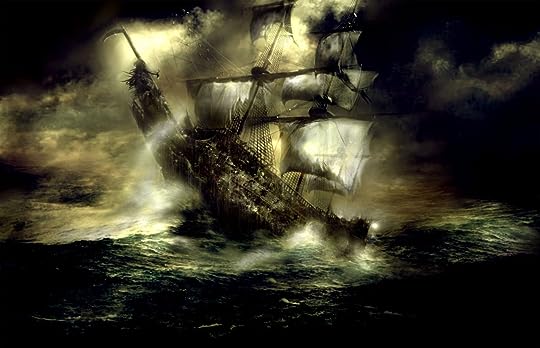