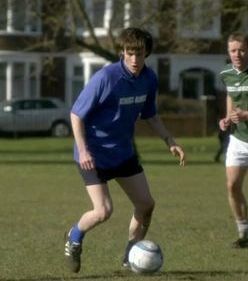 Personality: Kind of selfish. Since he's famous, he expects everything to be handed to him on a silver platter.
How they got famous: Talent scouts watched him playing sports in school, so they wanted him to play football for Man. Utd. .
Crush: Open
History: His parents were alcoholics, and verbally and physically abusive. He was painfully shy when he was younger, 'cos he thought all people were like his parents. He was adopted when he was 15.