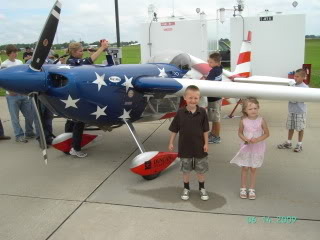 This picture was taken June 14, 2009, at the Clarinda Air Show in Clarinda, IA. My two oldest children stand in the foreground: Henry, looking giddy to be so close to a real aircraft, and Eleanor, clearly feeling intimidated by the whole thing.
Just behind the plane is Chandy Clanton, the pilot and a three time member of the United States Unlimited Aerobatic team. The two boys behind my kids are Chandy’s sons. A few weeks after this picture was taken, on July 10, 2009, as Chandy flew in preparation for the Wingnuts Flying Circus in Tarkio, Missouri, her Edge 540 aircraft crashed. She was pronounced dead at the scene at the age of 36.

Her death is a reminder of how fleeting life can be, but as her friends and family have since repeated, she died doing what she loved.

My July Love Inspired Suspense, Dead Reckoning, tells the story of an acrobatic aviatrix who also loves flying. Her story was inspired by Chandy’s bravery, her love for her family, and her love of flying. This book is dedicated in her memory.

Stories like this really bring the tears. Dead Reckoning is on my list to read. I have enjoyed the four books I have read so far and in a way I'm glad I seen this before reading Dead Reckoning as it may have extra meaning now as well.

Wow sounds like a great women and the book sounds really interesting. I loved your last book you wrote.

I keep thinking about Out on a Limb because hubby is outside smoking meat and using pecan wood!

I had no idea when Emily Rodmell offered several copies for review via Twitter. Now I'm really looking forward to getting my copy and reading it.

Mod
Yes, definitely follow Emily. She gives away review books every now and then. She's @EmilyRodmell