Hi. I thought this topic might be of interest. The novel Land Run has had some controversy on genre placement. The video is on the author page and also here:

The whole idea of genre is a pain in the backside. Authors create new, unique things, but shops and librarians want to categorise them into well-know pigeon holes.

Bad luck to any author who writes something that cannot be readily categorised; shop keepers won't know where to put it, and readers, who are usually conservative in their likes and dislikes of genres, will not be confident enough to buy it.

There is a way out of this dilemma. Just be a very famous person. Any sort of fame will do, sports star, politician, criminal (those last two are not necessarily synonymous), or even a multi-million selling author. Once you've jumped that hurdle, you can write what you like.

:-) Maybe the thing after writing whatever...is to appraise the work for what it seems heavist on. Then agree to that should some one ask. I recently read a Victor Pelevin novel. He is science-fiction...but the Yellow Arrow seemed more existential philosophy. Maybe you end up dissapointing some people...but introducing others to a new form to be interested in. Don't know. very sticky stuff.

reply | flag *
message 4: by [deleted user] (new)
Oct 09, 2011 12:08PM
Jacqueline wrote: "The whole idea of genre is a pain in the backside. Authors create new, unique things, but shops and librarians want to categorise them into well-know pigeon holes.

Bad luck to any author who write..."

Sometimes there are definite genres such as crime and romance, but mostly, as you say, writers create things that can't be put in a pigeon hole.

Another thing writers are always told to do is think of their target market. I loved it when JK Rowling said she never thought about target margets when she was writing her first Harry Potter, she wrote for herself.

But in spite of this, they still carry on about genres and target markets. They smother creativity before it is born.

At least I beat Alexandra Dumas as ‘The Three Musketeers’ was only 1*
All for one and one for all - I didn't know I was that good! :-o)

BUT I am now confused as to which genre I should list :-o)

Put the 2-star person back in their basket and forget it ever happened. It looks like a historical novel to me.

Intrigued as to how you got a publisher to accept such a long book - you're not JK Rowling's nephew, are you?

I used the 2 star comment as a positive by posting the comment that it was a chick lit on the chick lit site to advertise - it worked as Ice King is now, on Amazon UK & USA, # 1 for HF / romance slavery, so I'll take the right type of 2* anytime :-o)

LOL re J.K Rowling connection, I should be so lucky. The cover makes it look like a ship to ship action novel, but it isn’t, and with hindsight (isn’t hindsight great?) because the story is about the anti-slavery movement, just as Britain was about to make it illegal in 1807, perhaps I should have had a faint picture of a slave ‘Am I not a man and a brother’ thanks to Josiah Wedgewood’s medallion. The ship link is because the main character wanted his own command, but the story is relational between the son who hates slavery & the father who deals in slaves. You'd have to read the book to work out the title :-o) 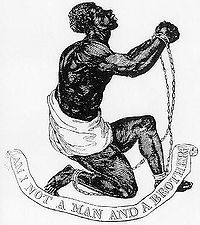 I've had some good reviews on both Amazon sites, readers have been very kind.

Isn't Liverpool a great place to set a story? My Light o'Love came from there, but it's theme is nothing like as grand as yours.

I've just read about Light o' Love on your web site and the reason why you placed the story in L'Pool - all very interesting. (Tried to highlight the title but it din't show)
It's a small world - I was born in Lower Tranmere, B'Head and my wife comes from Norris Green in L'Pool.
As for N. Wales, I'm half Welsh (mother from Caernarvon) and I was at a naval college in the grounds of the Marquis of Anglesey estate for two years (the naval college was called HMS Conway).
In 2004 I took my wife back to her home town. It was her first time back to the UK in 24/25 years.
It didn’t take long for our accents to return although most people in L’Pool thought we were Australian!
On our return our children thought we’d just got off the boat. :-o)

Next time I'm in UK, I must visit Liverpool. Only this time, I shall stay in the Adelphi (do they have cheaper rooms at the back?) No more slumming it in Liverpool 8 student dives. I want to see the river again, have steak and kidney pie at The Slaughter House in Fenwick St, and watch the sun go around inside the RC Cathedral. It will probably make me cry and feel very old...

LOL -in 2009 it was the 150th anniversary of the founding of HMS Conway, and as she was originally a sailing ship moored in the Mersey off Rock Ferry, Liverpool has always been considered her home port. So the 150th was held in L'pool and committee did a deal with the Adlephi and we virtually took over the hotel (rooms, banquet hall (for the main dinner on the Saturday night), we had four nights. Thu to Mon morning, it was an experience. When I was a child it was always the best hotel in town and I often wondered what it would be like, and as an adult it never occured to me to go there for a drink - I preferred a normal pub such as the 'Philly' or the Grapes near the Cavern, and at times The Slaughterhouse :-o)
Our room was near the top, but we didn't have windows, but what looked like portholes - we could see across the city and the 'old feller' in front of Lewis's :-o)
http://www.oldwirral.com/rockferry_co...
picture of the Conway off Rock Ferry and just after she ran aground in the Swillies (between the two bridges that join Anglesey & the mainland. One of the anchors from the old ship has been placed at the entrance to the Maritime Museum at Albert Dock. If you do go back and you haven't seen the Maritime Museum it is well worth a couple of hours, and they now have a Beatle museum just round the corner.

Mod
Wow Geoff and Jacqueline! Some really interesting history there. Thanks for chatting so we can read it;D

Geoff, that 2* person must always mark low!! Fancy some of those other books being 2! I wonder if they ever mark anything 4 or 5!!! I haven't read your book, but I totally agree with Jacqueline, ignore it!

Ah, Brenda. Liverpool is unique. I went to Uni there in 19**** well, a long time ago. The Cavern Club had closed by then, and the Beatles had flown away, but I still stayed at the end of Penny Lane for a year. Great times (and place)...

Mod
My hubby and I would love to travel over there sometime, I'm not sure if it will ever happen, but if we can, we certainly will. There is so much history, and fabulous things to see!

Jacqueline,
If you wanted to feel old - try being there when the Cavern (the original), The Gaslight, Massa Docs & the Bamboo Club were going full blast - that's old :-o)
I met Maureen at The Gaslight, it might have been still going when you were there - one of the safest places for single girls - if Wally (the owner) didn't know you, you didn't get in - any trouble and you were out on your ear and banned. Went back in 2004 the basement (dance & food area) had been filled in and the building knocked down and turned in to a very small car park. (3 cars max)

Geoff, I've put your book on my to read list. Nothing about the cover or pitch suggests chick lit to me. I read the review, which I thought sound a bit odd. Good luck with future reviews and sales.

reply | flag *
message 17: by [deleted user] (new)
Oct 11, 2011 11:02AM
The Book Thief, which I'm reading at the moment, is relevant to this discussion. I wouldn't have a clue which genre it belongs to, and I don't care. It's amazingly original, the characterisation is powerful and the storyline is enticing.

Mod
Joanna wrote: "The Book Thief, which I'm reading at the moment, is relevant to this discussion. I wouldn't have a clue which genre it belongs to, and I don't care. It's amazingly original, the characterisation is..."

And it's just purely wonderful;D

Sadly, the book industry especially marketing departments for publishing houses don't agree. They judge a book by it similarity to other books and how those other books sold in the market.

I agree with you all - why do we have to be put in a box with a label on it. I am always looking for something out of the ordinary to read.
OK if it is obviously romance or historical but books like mine do not seem to fit in a "box" and it makes it hard to recommend to a specific genre. Such is life!!

Thanks for the box image. I was looking for a neat image to explain something in the review I'm uploading this afternoon.