Mod
Name:Rin
Age (11-19): 14
Species: vampier/warewolf(volf)
Personality: Shy at first, but once you get to know her she becomes a outgoing girl who loves adventure but knows when to retain herself.
Appearance: http://www.google.com/imgres?imgurl=h...
History: When she was young her best friend(a vamp) bit her older sister who bit her.
Reason for being at the Acadamy: She came to the acadamy because she bit her other best friend who sadly died in the prosses and was accused of murder.
Crush: none at the moment
Other: acts like she hates her sister but they are truly friends (sometimes).

Name: Lindsey Gran
Age: 15
Species: Fairy
Personality: Sweet, slightly crazy, funny, smart, small temper problem
Appearance: 5'0", http://weheartit.com/entry/11776159, with wings
History: Born into a fairy family in a tree in the Hundred Acre Woods
Reason for being at the Academy: Turned ex-boyfriend into a leaf after she found out he cheated on her
Crush: Open
Other: Addicted to chocolate, hates gnomes, very pretty and popular, bites people when she gets mad, don't be within throwing distance of her on exam days

reply | flag
message 5: by [deleted user] (last edited Jul 09, 2011 07:02PM) (new)
Jul 09, 2011 06:59PM
Name: Miranda Leyla Levesque (LUH-VEC)
Age (11-19): 16
Species: Witch
Personality: Miranda defintely isn't one to interact with people on the most friendly standards. She usually finds some kind of fault in someone and automactically feels a disliking towards them. She can be absolutely insensitive when it comes to people's feelings and uses sarcasm on a regular basis. She's not exactly full of herself,she just doesn't feel the need to care about people too deeply and especially despises human with a passion. It's very rare that someone will get on her good side,if she has one. She has a very dark sense of humour and will do anything,even kill,to get what she wants. Miranda never plays to get even...she makes sure she wins.
Appearance: Miranda's dark brown hair fall in waves past her shoulders. Her skin is a pale,ivory color but with a the slightest tine undertone. Her angular cheekbones make her look more modelesque but her enchanting sea green eyes with her narrowed eyebrows to frame,it only enhances her witchy exterior. She stands at an averagly tall height,at 5'8 and her toned muscles only show her natural athletic ability. She also has a jagged scar on her ankle. 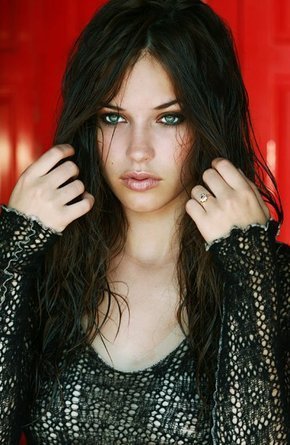 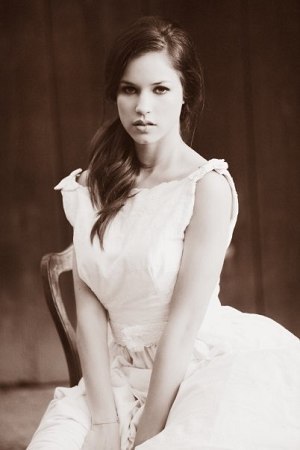 History: It had been one of her tempermental nights,seeming as she had just had probably one of the worst fights with her mother. She had snuck out to a bar;drinking just seemed to calm her down and the after effect of using dark magic. After awhile,she had gotten completely wasted and gotten into a fight with one of the other girls there. The girl had been stupid enough to actually pull a knife on her. She ignored the aching pain,she was too buzzed and adrenline-crazed to feel anything. That's when she felt the tingle rising within her and eyes flashed a bright neon green. Suddenly the whole bar came crashing down and she knew she was the cause of it...and also the cost lives of supposed "innocent" humans. She could care less..or she cares more than what she's letting on.
Reason for being at the Acadamy: She destroyed a bar and killed most of the people in it.
Crush:
Other: She draws/sketches alot. She gets these weird dreams and it's the only way she can remember them scince they somehow escacpe her mind so fast.
Family:
Mother; Kelly Jaye Levesque
Father; Her mother never told her so they just avoided the topic
Cousin; Luciano Anthony Grimaldi

Mod
Name: Dakota Jo
Age: 15
Species: Elf
Personality: Nice but sometimes loses control of her magic, sweet, outgoing,kind, trustworthy, funny, witty, short tempered, country.
Appearance: http://weheartit.com/entry/6042702 4'11
History: grew up in a small country cottage with her human godmother. Not until age 13 did she find out she was an elf. She's a huge country girl.
Reason for being at the Academy: Got expelled from Hogwarts when they found out she was an elf, parents are dead, godmother dead, all living relatives are dead.
Crush: Jake
Other: Lives in America in a foster home.

History: Grew up in a family of witches and wizards. She was always in her popular brother's shadow, and strived to be the smart one.

At the Academy Because: Her parents have busy jobs and are always on business trips and thought this would be the best boarding school for her and her brother.

Personality: Slightly full of himself, a little arrogant, flirts a lot, determined, nice (but doesn't always show it), talkative

History: Grew up in family of witches and wizards. Was always the popular one, good at sports and friendly.

At Academy Because: See Juliet's. ^

Name:Georgiana Willis(long name for such a short person) like to be called george fro short (get it... 'short')

Species: elf (does not like the fact to be pointed out)

Personality: kind, but is big on first impresions, loves to get on her soapbox (once she gets going it's hard to make it end)a true romantic and is pretty laid back.

History:lived with the keebler elfs since infancy till she made a horrible batch of fudge cookies (although she really was very good to begin with) and was sentenced to be shunned.

At Academy: parents thought she could learn another useful trade here instead of cooking.

Other: can make a meal out of just about anything

reply | flag
message 11: by [deleted user] (new)
Jul 10, 2011 11:44AM
Name: Riley
Age: 17
Species: Shape-Shifter
Personality: She doesn't trust people eaisly due to early childhood experiances. When she does get around to trusting you and you show her you are a good person she will do anything to keep you safe. If you lose her trust or hurt her she will never forgive you. She is very stoic and tough.
Appearance: http://www.google.com/imgres?imgurl=h... (Except black and red)
Eyes: http://www.google.com/imgres?imgurl=h...
Wolf form: http://www.google.com/imgres?imgurl=h...
History: When she was 10 her ability to shape-shift surfaced, she was always deemed a problem-child and bullied in school. One day when the bullying got too much for her to handle she snapped and turned into a wolf mauling 3 kids to death, she was freaked out and ran away from her town deep into a forest that surrounded it. She learned that whenever she expierianced a strong or deep emotion or when she was in extreme pain she would shift into a wolf, so she began to shut down her emotions, she never shows any excess emotion and her pain tolerance is extremely high.
Reason for Being at The Academy: She snapped one day when she was 10 turning into a wolf and mauling 3 kids to death.
Crush: Open
Other: She has learned how to change into a wolf anytime she wants, she likes being in wolf form a whole lot better then being a human. When she is a wolf her eyes are the exact same as they were as a human, that is really the only thing that gives her away that she isn't all wolf. Because she has stayed as a wolf for so long her voice is permanentaly hoarse.

reply | flag
message 12: by [deleted user] (last edited Jul 26, 2011 08:18PM) (new)
Jul 10, 2011 11:56AM
Name: Jake
Age (11-19): 16
Species: Wizard (The original style wizard. Not tis prancy new Disney style. I cant stand that. Disney used to bne brilliant!)
Personality: Kind, but can be a bit aggressive. Though only to someone he believed, was, say, threating an innconce.
Appearance: Fairly tall, brown hair.
History: Lived peacfully in a forest as a runway. He liked it their. His family, actually knew where he was. One day, goblins attacked, and he used magic fend them off. He never could prove that it was self-defense however...
Reason for being at the Acadamy: (If ever make a short story out something like this, he's banished for cheering for JeffGordon on NASCAR while everyone else is a 'Dallen' fan.) For slautering 'inncoence'.
Crush: Dakota
Other: Has a sweet spot on the back of his neck. Rub it (message it) and you can make do pretty much anything XD

Name: Sorin Markov
Age (11-19): 18
Species: Naga
Personality: quiet and sticks to himself but sometimes likes to speak up and he tends to shy away from confrontation
Appearance: http://m28.photobucket.com/image/rece...
History: he was born under the red moon which meant he was unique as nagas like him were born under every other moon except red.
Reason for being at the Acadamy: abused his naga magic and was not in the right mindset as a naga should be
Crush: open
Other: nagas are meant to be evil and hateful towards other species and are meant to use their magic to help only themselves and their own kind.
((i hope a naga is ok, nagas generally use shamanistic like spells and potions and generally practice magic involving words, chants and voodoo))

so are you part human part who knows what?

nagas are basically half human half snake

cool thanx i see why people think they're evil r u venemous?


so it's obviously Dakota and Hayley, I'm just confused on the last person...

Name: Peter
Age (11-19): 14
Species:half demon half warlock
Personality: funny,sarcastic
Appearance: http://blackcat.wikia.com/wiki/File:T...
Reason for being at the Acadamy: him and his half brother didn't eat enough raw meat and went full demon and killed the people of am entire town.
Crush: open
Other: is James brother.

Name: James
Age (11-19): 16
Species:half demon half wizard.
Personality: mean, harsh. Kind when on his good side
Appearance:black hair, tall,lean,red eyes
Reason for being at the Acadamy: same as brothers
Crush:open
Other: Peter's brother.