Mod
One on one's can be requested just state you name and who you wanna rp with, if they agree ill make you a rp and you can start

Mod
*rolls eyes* cause apparently everyone likes you

Mod
we dont even know what you look like HA...that has no point to it just my random factual comment

reply | flag *
message 22: by [deleted user] (new)
Jul 05, 2011 04:13PM
Name: No, real name was nicknamed Wolf because of my feral appearance.
Age: 15
Male or Female: M
Personality: Cold, cruel, murderous, will protect the ones he needs to, but will murder anyone in his way.
Looks: Slightly fang like teeth, black shaggy hair, brown, almost golden eyes, with snake like slits. Likes formal wear, ex.) tuxedo's or dress robes. He also wears a black hoodie with the Saints symbol on both arms, a skull and snake on the front, and usually baggy jeans and converses.
Powers: Lightning, telekinesis, teleportation, and immortality.
History: Doesn't remember much of his past, except pain. Always pain. Once his powers developed, he took what he want, when he wanted it. Now, he has his eyes set on world domination, or destruction.
Good or bad: Pure evil.
Crush: Open.
Other: He needs to find his 'Dark Queen' to help rule the world with him.

Mod
Name: Sye
Age: 16
Male or Female: Female
Personality: Rude, defiant, a failure at her job, tries to put on a brave face despite her small size
Looks:

Powers: Fire, a flame sword, using darkness to cloak herself
HIstory: Her parents we're good humans that died in a bombing, they we're aware of their daughters powers and there dying wish was to send their daughter to a special school. 3 years later she flunked out and despite her lack of control decided to start "saving the world"
Good or bad: Unknown
Crush: none
Other: A failure with a temper very affectionate while half asleep but wont remember anything in the morning

Mod
Zero wrote: "Name: No, real name was nicknamed Wolf because of my feral appearance.
Age: 15
Male or Female: M
Personality: Cold, cruel, murderous, will protect the ones he needs to, but will murder anyone in hi..." 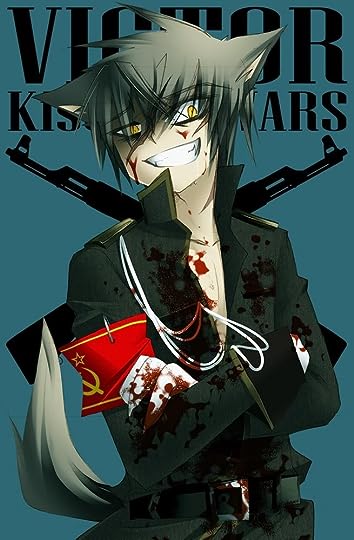 Haha! I'm just that awesome. *sticks tongue out at you*

Mod
you mean annoying *smiles and flips you off*

oh i added something to the cherrie in the other section

Mod
Charming? I would very much like to stick with annoying :) but ill give you funny

I AM SO CONFUSED!

ill rp with you