Full of shadows and dark colors the bed frames are black swirls going out and a black marble trunk is at the end of each bed. Black side tables are to the side and the back wall is a entrance to the underworld if blood is given to it. The floor has fog on it usually
Beds look like this but with different sheets: 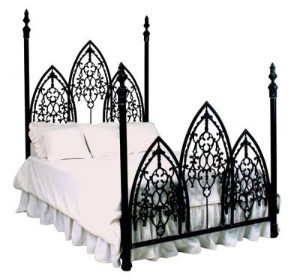 Natalie runs through the room

Natalie stops "Who are you?"

James sits on his bunk.

Natalie lays down "Are you my uncle too?"

Natalie runs out of the cabin

"bye" Dakota yells after her

"Hey guys!"Elpida said holding her back pack over her shoulder. She almosr falls as Natalie runs out."Woah! She's in a hurry! Back for the summer!"Elpida smiles going to her bunk.

"Hey Dakota how was school this year?"

"I had accidents too"

"Don't we all. Anyway I'm headin' out. You know gotta get stronger so i don't die during the 'accidents' haha"Elpida said.

"Hey James, Bye James"Elpida said and headed out the door.

Kelsey shadow travels in and throws herself on the bed. She grabs her ipod and plugs it in. She blares Breaking Benjamin

James comes in "that was rude not inviting me." he said.

Kelsey just turns her music up louder, she looks away from him. "Want to explain what's going on?" she mumbles

Mod
"i barely kniw whats going on and i cant tell you anything with james here."

Kelsey sighs, she waves a hand and James disappears into a shadow she created. she turns her music down a bit "now what?"

Mod
hiro makes a a fire wall."derek told me that the drug group that was selling ambrosia to humans was just a small division of thismafia of half-bloods and they were behind 9/11. they want to destroy all greece-influence nations including greece. for an iunknown reason. derek was undercover but h called me the on,ly person he can trustm and i want you to come with."

Kelsey frowns "But the ambrosia would kill the humans instantly..."

Mod
"and it did. we killed those half-bloods but its still going on. we have to stop this anti-greek empire before they do worse things than 9/11.

Kelsey sits up and rubs her face with her hands "And how am I tied into all this?"

Mod
"ur my girlfriend and i know you can kick ass."

James was in the bathroom listening.

Mod
"of course not but i knwo u can kick ass just not derek's i cant even kick derek's ass.

Kelsey sighs and starts absently braiding her hair "So when would we leave for this thing? And what would we do?"

Mod
the bathroom lights on fire.

Mod
"soon i guess and travel and kick ass. derek was pretty high up in the ranks"

James runs out and sees hiro "hi... I was just getting my..." he thought for a moment."sword." he grabbed his sword and ran out but listened buy the door.

Kelsey crosses her arms and leans against the bed board "I don't like Derek, he's an ass"