Name: Diane
Age: 341
God/Goddess of: Flight
Looks: Diane has a willowy stature while maintaining her curves. She's not gorgeous, but can easily pass for pretty. Large purple eyes full of soul framed with dark lashes and fair-skinned. Straight black hair that is streaked with dark violet reaches slightly past her waist, often letting it hang over half of her face.
Personality: Quiet if you don't know her, can give off the impression of intimidating and scary. She is actually a fun person to be around if you can get her to talk to you, but she rarely talks, keeping to herself most of the time. Diane smiles a lot and her hands are constantly fiddling with something, whether it be her hair, her clothes et cetera. Too forgiving and trusting, borderline naive, always seeing the best in people even if they're god-awful. Patient, thoughtful, logical, serene, and likes to be alone often.
Other: Likes birds. Sounds kind of crazy, but it's because they she can communicate with them mentally and they tell her stories of mortals on earth.

Name: Nyx
Age: 445
Gender: Female
Goddess of: The Night
Looks: Her hair is silver, cropped short around her shoulders, and glows softly when her twin, Dinesh is around. She is thin, tall, and angular, with a sharp pale face and slanted dark eyes. If you look closely enough you can see star constellations in her eyes. She wears long mid-evil type robes, that are a soft dark blueish-black. Sunsets, sunrises and the night sky are embroidered on it. She also wears a silver circlet on her neck.
Personality:She is calm and not easily agitated. She keeps secrets and is not very outspoken. She likes to listen in on conversations, and is the counterbalance to her brother.
Other: She uses Nightingales and Lunar Moths as an extra set of eyes and ears, as well as messengers of she needs them. She enjoys painting in her rooms, where the walls represent the night sky.

Name: Dinesh
Age: 445
Gender: Male
God of: The Day
Looks: Taller than his sister, with broad shoulders and a deep chest, he is tan, with dark gold bronze hair that always glows. His blue eyes change color with his mood, like the weather, and he often finds them "Raining". He wears a leather vest with an embossing of the sun over a grassy hill. He also wears a pair of black denim pants and knee high leather boots.
Personality: His moods, Like his eyes, change like the weather. He is often rash, loud, and impatient for things to happen, often trying to set stuff up so that it happens at a quicker pace. HE is always in motion, and isn't happy unless he is doing something.
Other: The reason for all the leather is that his hobby is metal working(old fashioned). He is not the god of it, he just enjoys it.

*has not gotten around to making hers*
>.<

:D
I'm so proud of myself lol, I finally did it!
YESSS
*does not take much to be impressed or amused*

Does anyone want to rp with me on this one? :D

reply | flag *
message 16: by [deleted user] (new)
Sep 28, 2011 06:50PM
Name: Valkyrie
Age: 262
Goddess of: Life
Looks: Bright blue eyes that seem to have swirls of light green in them, her hair is a medium brown. She is small and looks rather delicate. She has tattoos of roses going up and down with the stems joining each flower flowing around her arms
Personality: she is a caring person who never says a mean word about anyone, although she does tend to be more of the quite one she will speak If she is spoken to.
Other: n/a

Name: Tennor
Age: 300
God of: The Unknown
Looks: Pale, black hair, tall and unassuming. Prefers dark clothes and a deep cloak.
Personality: Keeps to himself, smart, and good-natured though misunderstood.
Other: 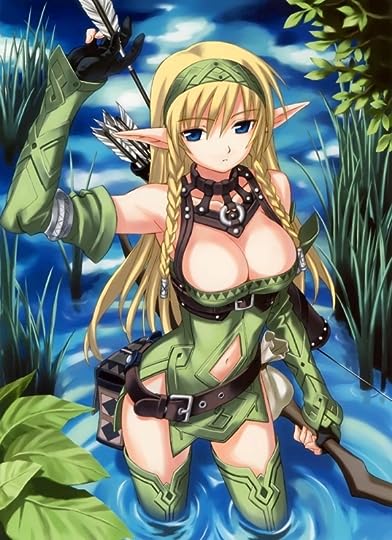 Personality:outgoing, she has a sharp tongue and will hurt you severely if you harm nature.
Other: is friends with a wolf pack that lives in her forest.