Feel free to add anything, i haven't done a bunch of fantasy

Personality: Reserved unless around his teacher or friends, likes to help but overdoes things.

Other: Comes from a poor family, wants to become the head of the sorcerers guild.


Personality: Not very open to others, has few friends, and trusts virtually nobody

Other: Lives with her dad who's taught her everything she knows about vampire hunting

Name: Shielkif of the Sand

Other: His tribe has been wiped out by Sly's father, Bruce. 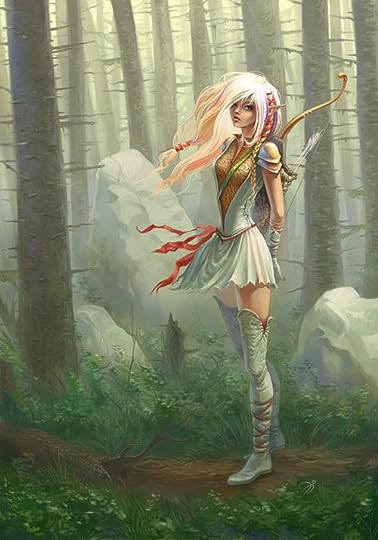 Personality: Kind, caring, fierce in battle. Tries to see the good in everybody. Doesn't fight unless she has to.
Occupation: Elf; Warrior/hunter.
Other: Rouge. Fights for the common good, equality, blah blah blah.

Name: Ric Dubatch
Age: 17
Looks: http://images.sodahead.com/polls/0014...
Personality: protective and sometimes nosy
Rank(knight,king,assassin,princess,commoner,ect): Vampire hunter who is part fairy
Other: Sly's older half brother who is also part fairy which gives him the power to control fire

Name: Janessa
Age: 16
Looks: http://1.bp.blogspot.com/_2iSSI8Mqc5c... the skin tone and build of a porcelin doll
Personality: Drawn in quiet scared of the world but when you get to know her shes freindly aring out going and awesome :)
Rank(knight,king,assassin,princess,commoner,ect): Neko princess but she doesnt know. her kingdom was destroyed so her parents sold her into the slave drive requestiong she say as a manual slave and was only sold to nice slave owners who would treat her right. So far this has been upheld and she hasnt been told why she was sold into the slave drive yet because no one knows if her parents are still alive or dead. when they have confirmation they will tell her.
Other: Being royal neko she can turn into any animal of any kind and any color. she usually has the ears and tail like this: http://www.google.ca/imgres?imgurl=ht... and turns into a fox of the same color more than anything. half vampire but when she has to drink blood it will be from blood bags or from animals that dont have long to live anyway. she doesnt like hurting people. Her best freind is her current slave master who trys to sell her. when people try to make her do something she doesnt want to she can get really pissed. so dont do that. shes horribly mean and wont let anyone touch her when she's pissed. Hard to earn her trust hen you have it she trusts you completely when you loose it it is almost impossible to get back.

Name: Reynard
Age: 24
Looks: He is unknown in the land, and no one has ever seen him, so people are open around him. He dresses in dark green leather pants and a light gold brown tunic, both in varying degrees of shabbiness
Personality: Quiet, easy going. He is easy to talk to, and is a very good listener. Hardly ever talks.
Rank: Royal Spymaster and assassin
Other: His history is unknown by all except the king.

Mod
Name: Jaquelin Rose, Jacki for short
Age:19
Looks: http://th06.deviantart.net/fs13/300W/...
Personality: fiesty, confident, blunt
Rank: sorceress
Other: she had to choose between her family and magic when she was young and chose magic. she hate talking about it, but is glad she chose magic

Name: Alanna or Alan
Age: 16
Looks: she has shoulder length orange hair, and when I say orange, I mean ORANGE!!! Purple eyes, freckles and wears a a leather choker with what looks like a burning ember on it.
Personality: She is headstrong, prideful, energetic and caring
Rank(knight,king,assassin,princess,commoner,ect): she is a knight and a Sorceress
Other: she actually tricked her way into Being a knight, it was supposed to be her twin brother, but she wanted to be one and he didn't. So she disguised and only revealed her true self right before the ceremony, but she convinced them to let her become one.

Name: Damon
Vampire Age: 540
Human Age: 25
Gender: Male
Looks: [image error]
Personality: Damon is a very closed off and quiet being, though he does frequently make snide or sarcastic remarks most of the time. He has this 'signature smirk' of his he displays when he is being cocky, or stating something teasingly.
Damon does however, have a bit of a reputation as a womanizer. Personality wise, Damon is described to be sinister, dangerous, generally unkind, care-free and unsympathetic. Some of Damon's other basic personality traits include sadistic and impulsive. Damon is a seductively charming and a very dark, compelling character.
Over the many centuries that he has lived on Earth, Damon uses whatever and whoever he can to get what he wants; not caring about who he hurts in the process. Because of his highly vain personality, Damon often resorts to either the use of manipulation, threats, or direct coercion or force in order to get his own way. However, when Damon does not get his way, he resorts to extreme reactions of anger, envy/jealousy, vengefulness and intimidation. He generally acts flippant, arrogant, and constantly plays word games, especially when it comes to dancing around an issue, and even more especially when that issue involves his real, true feelings or his intentions on or about a serious subject.
Yes, Damon does like anyone and everyone else, have true feelings although they are always hidden, and kept locked away. His personality has resulted like this because Damon has gone through so much in his life, especially when he was human. He was betrayed by the 2 people he loved the most - his own brother and the woman he used to love.
Crush/Mate: For Damon there’s no such thing as "the right one" or "the love of your life", there’s nothing more than physical attraction and tolerance at the very most. He claims that he had never been in love and isn’t planning on doing so... Yet.
Other: He can turn into a raven.

:D
That's super good!! And I haven't rped with you in forever!!

[Nomz]ErinXXFAILNINJA wrote: ":D
That's super good!! And I haven't rped with you in forever!!"

Sorry. I think we rped on this werewolf rp a while back.

Ah, alright then. It's just your screen name isn't familiar to me.

No I don't think so. I never joined those groups. XD You must have me confused.

Tis fine. :) No need to apologize.

reply | flag *
message 28: by [deleted user] (last edited Apr 02, 2012 11:44PM) (new)
Apr 02, 2012 11:42PM
Name: Mina Capriallo
Age: 146
Looks: the age of 20ish, short spiky black hair, leather hunting boots, and hunters clothing apart from the black coat she wears that looks baggy on her.
Personality: friendly and bubbly but hates it when people call her "little" or "weak". 5,6 and thin but she is strong which makes people lulled into a false sense of security
Rank:has been "passed through"(kinda like scratched from a werewolf thing) by a hybrid .
Other: her fiance was killed by the hybrid that passed through her. She is now kind of experienced with her minor powers, but any necromancer can control her .