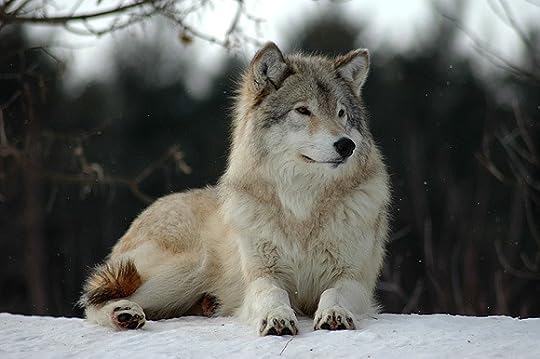 Personality: Freya is extremely brave and strong. She's wise, despite her age and is fierce when she needs to be. She's got a kind heart, but is a little shy and she's quite mysterious.
History: Freya was born into BisonPack, but was kicked out because the others thought she wasn't cut out for pack life, and they were right. When she'd been part of the pack, she'd found it stressful and the other wolves pushed her around because she was smaller. Freya has been alone ever since.
Crush: Open
Mate: Open
Kin: She claims she has none.
Other:

Name: Coal
Gender: Male
Age: 2 years old
Looks: He's a pure raven black wolf with long silky fur, big blue eyes, and a nice thick bushy tail. He is large compared to most wolves and looks a little threataning when he walks because his muscles are distinct.
Personality: He is mischevious and clever. He also kind of entergetic and playful, often teasing the wolves to chase him and his mate across the country just for fun.
History: He also belonged in BisonPack, but was banned because he supposedly stole the alpha's food. Whether this is true or not, him and his is not very well liked by the Packs for they always steal and cause trouble.
Crush: None. He has a mate.
Mate: Raven.
Kin: None.
Other: Most of the packs want him dead.

Name: Raven
Gender: Female
Age: 2
Looks: She's a small wolf with deep amber eyes and a thick glossy plumy black fur. She has a patch of white on her forehead though.
Personality: She's clever and graceful. She is known to be one of the fastest wolves within the territories and she does it with pride. She is stubborn and vain but cares for her mate and will help another in need.
History: No one knows where she specifically came from. She just kind of appeared with Coal.
Crush: None. She has a mate.
Mate: Coal.
Kin: Unknown.
Other: She is wanted dead just as much as her mate.

Name: Blue
Gender: Female
Age: One year old
Looks: If not picture, two good sentences at the least. a blue-gray female wolf with thick, long fur. A broad face, silver hair tinged around her muzzle and tail, a torn ear, broad shoulders, a scar which parts the fur across her shoulders, a long sleek tail, and piercing round, icy-blue eyes.
Personality: At least two good sentences. She likes to make everyone happy even if she doesn't even know them. She is usually sad when she is alone, remembering her life.
History: At least two good sentences. When she was young, her mother died and one of her brothers Storm died after she was finally began to eat meat, when she got older her brother Patch got carried off by an eagle. When she and her other brother Sky got older, they decided to go hunting without telling there father, when Sky ran after a rabbit, he never came back, leaving her heart broken, her father then left her.
Crush: Open
Mate: Ask about both. Doesn't have one
Kin: Family Her mother Petal ((Dead)) her father Lion ((Unknown)) her brothers Storm, Patch, and Sky ((Storm and Patch dead and Sky unknown))
Other:

Name:Jasper
Gender:Male
Age:4 Years
Looks: http://images.google.com/imgres?q=whi...
Personality:Jaspers pretty cold, solitary, and very idependent, but if you have a lot of patience with him, he'll slowly open up to you and become a gentle, fun, sarcastic wolf. He can only tolerate so much though, for he is easily irritated, yet he does not have a short temper.
History: Jasper -at birth- was delcared a malcadh (A cursed pup) Malcadhs are taken by a Obea and left to die. Jasper was delcared a Malcadh because of his birth defect, he was born with a splayed paw. Jasper was left on a mountain, cold and shivering. Before the Obea left, she pushed him down the mountain and sent him tumbling. His eyes and ears were forced open as he rolled down the mountain and into a river. It was winter when he was born, just turning spring. He was banged on rocks and his soft pads on his paws were bleeding from hitting the rocks until he suddenly stopped. He was taken out of the river and carryed to a cave by a grizzly bear mother named Ulape and raised by her until he ventured out oneday. Out of worry Ulape went to find him and was killed by another bear. Jasper blamed himselft and went to live a life of depression and sorrow by himself.
Crush:None
Mate:None
Kin:None that he knows, he was taken from his mother at birth
Other: Jasper knows all about bears, and wolfs. He knows more of a technique than most wolfs because he was taught the way of the bear.