reply | flag *
message 2: by [deleted user] (last edited Jun 28, 2011 12:46PM) (new)
Jun 27, 2011 11:52AM
Name: Asher
Age: 4 Years old
Gender: Female
Rank: Alpha-Female?
Pack: SaddlePack
Appearance: [image error]
Personality: Asher is wise, sweet, caring, and sympathetic. She is almost the perfect alpha female, except she is not one to leap into fights. She isn't always determined, but she can always pull through. She makes it her duty to have pups every spring, as the pack must grow. She takes pride in every pup of the pack, often encouraging other wolves to have pups, which is a rare blessing. She does know when prey is scarce, so she is always fretful about that. She also does not take rule-breaking lightly, and is the one who chooses the punishment for every wolf and pup. She respects the elders more than herself, and cares for them sometimes.
History: With her high rank, it just shows that she was born into the pack. Asher was raised by the original alpha female and male, but the other pack members taught her how to hunt and fight. He father loved her very much, but clearly favored his son, Aren. Asher always competed with her brother for her father's attention, and she grew to hate him. Once she became Alpha, he mated and impregnated a wolf without her permission. Normally, Asher would be furious, but forgiving. But, with her brother, she banished him from the pack. Aren was never seen again, and his mate left with him.
Crush:
Mate: Briar
Kin: Anyone younger than herself can be her children, I don't really care.
Other:

Since he's alpha, the other alpha would be his mate.

Well he can... but they wouldn't be able to mate. Of course it could be a secret thing.

Hins, why couldn't they mate? 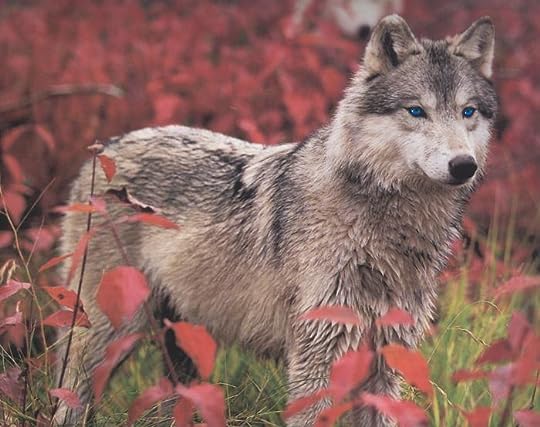 Personality: Star is extremely determined and kind-hearted. She won't let anything stand in her way and is loyal to her pack. She accepts almost everyone, but some she doesn't trust. You have to try hard to win her heart.
History: Star has always been in the pack. She was born to the Alpha's in the position before Asher and Moss. She has always tried her hartdest in the pack and deserves her place well.
Crush:
Mate:
Kin: Open (anyone want to be part of her family?)
Other:

I was replying to Flameheart.

Personality: Unlike Asher, Briar is often one to leap into fights— being a very aggressive and, almost unreasonably, protective male. He is usually sensible when it comes to tactics, though tends to be somewhat inconsistent. He is particularly gentle, especially towards Asher, though is completely intolerant of contempt, disrespect, or anything that threatens his complete authority or the safety of Saddlepack.

Oh.Think I should change the name?!?

DO NOT USE MY NAME FOR CHARACTERS! Sorry, had to say it.

Name: Rio
Age: 3
Gender: Female
Rank: Subordinate
Pack: Saddle
Appearance:
http://1.bp.blogspot.com/_YLMe_JonTu0...
Rio has a white underbelly, but other than that is gray. She has a black tinted tail, paws, and ears tips. Her muzzle is tainted a milky white with dusty specks. No brown on her. Her eyes are a deep green that change color in the daylight. She also has multiple wounds from battling.
Personality:
Rio is over confident. She gives herself all the credit for group work. She thinks she can take on any challenge head first. She is mostly head strong. She howls at night, looking for a mate. She really wants a mate, but has trouble expressing her feelings and having small talk conversations. She can be boastful. She is overly talkative.
History:
Rio was one of two surviving pups out of six in a litter. She was born in BisonPack, but taken away by her father because he believed she wouldn't live. She was tossed away into SaddlePack.
Taken in by the Alpha, Rio was shown to have exemplinary character and spirit, but lacked in one thing: self control. She was to become Delta, but failed because of the one sttribute. She has no idea where Alecek is now, and doesn't intend on finding out.
Crush:
Mate:
Kin:
Other: She wants a mate.

I can copy Leo from the other group for her?

I copied Rio's profile from the toher group.

Mod
Both alphas are gone, I will set up an adoption area soon.