Should she be the Alpha's daughtert? I'm about to make the Alpha.

Sure! The Alpha's name would be...Quira. 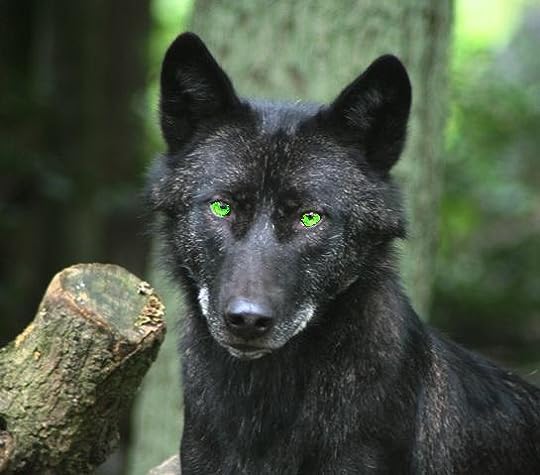 Personality: Quinn isn't very serious about a pack life. He spends most of his time goofing off, or with friends. He's more of a joker, than a fighter. His speed skills are off the chart, though, but he never puts it to good use. He uses it in racing contests when friends. Of course, when they are supposed to be hunting. Since his apprenticeship, instead of acting mature, he seemed to stick to his pup ways. He is sometimes singled out from hunts, because the older wolves don't want him scaring away the elk.
History: Quinn was born into Aspenpack, and I will add more once I get other details confirmed.
Crush:
Mate: Too young
Kin: Quira (mother), Shard (Adoptive sister)
Other:

Name: Shade
Age: 1 year
Gender: F
Rank: Apprentice
Pack: AspenPack
Appearance: [image error]
Personality: Shade can be a little bossy, but she always means well. She has an extremely kind heart and loves her friends more than anything. She has a soft spot for pups and often acts like one herself.
History: Shade was born a loner and was the only pup who survived. Her mother and father protected her with their lives and made sure she was always safe. When she was old enough, she left her parents and eventually found AspenPack.
Crush:
Mate:
Kin: Gabrielle (Mother), Jack (Father)
Other: She has no relations to anyone else in the pack. 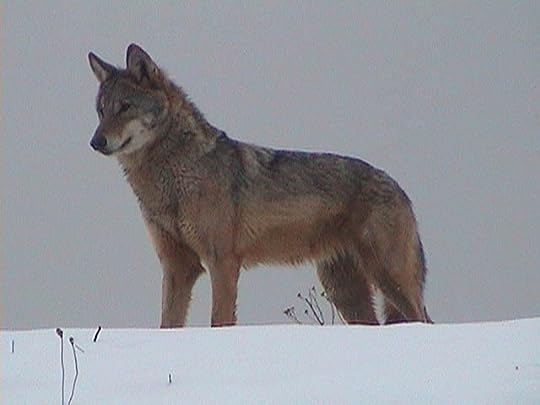 Personality: Teal is a very kind-hearted wolf. He is a little stubborn, but it's for the best. Teal can be a bit of a flirt, but doesn't mean to be. He loves pups and always starts playing with them. Despite all this, he's extremely loyal to his pack, and would sacrifice himself to save the ones he loves.
History: Teal was always pampered as a pup, the complete opposite to his sister, Ink. He had always been the biggest of the 4 pups and the strongest as well. Many times he tried to protect Ink from their mother, but failed miserably. Once he was old enough, him and his siter, Ivy went off to AspenPack, his siter Magenta became a loner and his siter, Ink went off to BisonPack.
Crush: Open
Mate: Open
Kin: Ink (sister), Ivy (sister), Magenta (sister)
Other:

Does the pic work at all?

Name: Quira
Age: 7
Gender: Female
Rank: Alpha Female
Pack: Aspen
Appearance:
http://images.publicradio.org/content...
Quira's pelt is scruffy and is of various lengths. She has a white striped body. Her head is white and the next stripe is brown and black and so on. Her ears are tipped grey and her muzzle is too. Her eyes are a soft indigo that turn lighter in the sunlight.
Personality:
Quira is a determined soul. She loves to help, but also has too much focus. She likes to busy herself. She almost never sits down. She likes to be focused on one thing rather than many. She is determined when it comes to her pack. Determination is one of her biggest attributes.
History:
Quira was born in captivity and raised by a human because her mother died when she was young. She trusts most people because of it. She has a sixth sense that lets her tell a bad wolf from a good wolf or a good human from a bad human.
She finally was released to Yellowstone and found a mate, joining a pack. Soon enough, she was voted as Alpha when most of the pack was deceased from famin. She finally decided to have pups at the age of six.
Crush:
Mate:
Kin: Prim(daughter), Quinn(son), Shard -adopted- (Daughter)
Other: She toom in Shard when she was a pup.

Alright, changed... The other one was better, though.

I will make Prim, but if someone wants to make another pup....

Name: Prim
Age: 1 year
Gender: Female
Rank: Apprentice
Pack: AspenPack
Appearance:
http://cache2.allpostersimages.com/p/...
Prim is very small for her age. Her fur is more white than her mother's. The top of her head is grey, but her muzzle is grey and around her eyes. She has a tan back with tan paws and a white underbelly. Her eyes are a mix between forest green and indigo, so they look more like a sea green.
Personality:
Prim has a tempter. She is easily offended and hard to trsut. She doesn't take punishment lightly, though she is the one punished. She argues until she gets her way. She is stubborn and hates gettign help. She hardly ever laughs, unless it is at another's pain. She doesn't like to play games. She loves to be taken seriously and being right. But, if you get her interested in something, she is a talker.
History:
Prim was born in the spring, so she didn't have to make the journey to the summer grounds. She was, however, born as the smallest out of two pups, her and Quinn. She took to her adopted sister like a real sister. Shard is really the only wolf she really talks to. If she is mad, usually only Shard can get through to her.
Crush:
Mate:
Kin: Quira (mother), Quinn(brother), Shard-adopted-(sister)
Other: She loves to get up early and watch the sun rise. SHe also likes watching the sunset.

Awwwwww! Can I make her a crush??

Sure, but they have to be willing to put up with her.

I'm making a character too!

Name: Adolpha Appearance
Age: 3 years (about 15 in human years)
Gender: Female
Rank: Subordinate (Hunter and Pupsitter)
Pack: AspenPack
Personality: A fun and outgoing character, Adolpha is a lively and amusing acquaintance. She rarely judges others, though is as easily victimized. She is small in comparison to other pack members and was often called a runt. Despite this, she it certainly not one of faint heart. Her fighting skills are well developed, but cruel. Though she doesn't seek the pain in others, she takes her skills very seriously. She also absolutely adores pups and loves caring for them.

History: Adolpha grew up having to fight for her status. She is currently a respected member of the pack and will not risk loosing that honor. Her father was an outcast, and her mother died early in her life. She's never really found anyone she truly and deeply cared for, though she's discovered a lot of comfort in caring for the pack's pups.

Name: Ivy
Age: 4
Gender: Female
Rank: Pupsitter
Pack: Aspen
Appearance:
http://webpages.charter.net/silvaheye...
Ivy got her mother's icey coat. She was black in only one spot: her forehead. On her forhead is a single black dimond. Some call it a "sign", others say it is just a marking. He left ear is half gone because a cougar had once bitten it off. The rest of her is pure white, even one of her eyes. From the cougar attack, she lost an eye. It's not a poor sight, for the fur has grown over so it looks like her fur is hanging in front of her eye. Her other eye is light blue.
Personality:
Ivy takes pitty on most wolves. She felt this way about her sister always getting punished, and ivy being the favorite. She has a way with pups, even thouugh she has none. She wants no pups of her own, but loves caring for them. She feels sorry for those wounded and never goes into battle, but hunts occasionally. Compared to her siblings, she has it made.
History:
As a pup, Icey was the favorite amongst her three other siblings. Ink was always pushed around for being the smallest and the only black pup. The others were brown. She was the only white, so she was the favorite. She was also the biggest pup. She had a wonderfull lifestyle until her father died.
When the cougar killed her father, her mother had taken her and her brother to AspenPack and left Ink to BisonPack, alone. Magenta, her sister, had run off to somewhere.
She was raised by the old pupsitter, who eventually died. She took that pupsitter's place. She always felt sorry for her sister, Ink, but never had the chance to tell her because she was always being punished. She wishes now she could tell her.
Crush:
Mate:
Kin: Magenta(sister), Teal(brother), Ink(sister)
Other: Her mother ran off to becoem a loner and find Magenta, but eventually died of exhaustion. 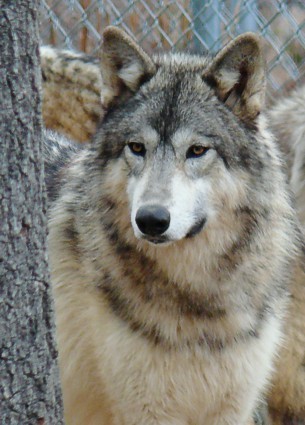 Personality: Noah is extremely patient and will put up with anything. He's got a bit of a short temper and is offended quite easily, although, he tries to hide it. Noah is extremely brave and would protect everyone close to him. He's got a little too much courage.
History: Noah was born into the pack to the last alpha's before the current ones. He was the only pup in his litter, so was left alone after his parents died. He's a little lonely in the pack, and has treated Shade like a sister, ever since she joined the pack.
Crush: Prim, he believes he'll be able to get through to her. Eventually.
Mate: Too young.
Kin: He treats Shade as a sister.
Other:

Name: Anko
Age: 2
Gender: Female
Rank: Kick-butt Omega!
Pack: Dude, really? What topic are you in? Exactly.
Appearance: http://fc04.deviantart.net/fs36/f/200... replace the purple with black.
Personality:Anko is easygoing, tomboyish, playful, stubborn, short-tempered, and sometimes hyperactive. But when you pick on her, well, fair warning.
History:Used to be a loner with a white wolf, until, he, kinda.Long story! But now she's good, so chill.
Crush: meh, if you want her come get her
Mate: Anko: *blinks* HA HA HA! ROFLHTO
Kin:naw
Other:

Name:Soku
Age:pup
Gender:Male
Rank: Pup
Pack: Aspen
Appearance: [image error]
Personality:He is vary playfull and minds his elders,He is vary Intelagent for his age and thinks most things are for small pups.
History:He joined the pack right after his mother abanded him,The pack found him while they where joining to the summer grounds.He is still new to most rules,He can also be Playfull with others.
Crush:
Mate:
Kin:Has never knowen his family,
Other:


Name:Safana
Age:8
Gender:Female
Rank:Pup watcher/Elder
Pack:Aspen (Why do thay put this?..*Shurggs*
Appearance: [image error]
Personality:She is vary sweet but if you mess with her pup she kills.Butother than that,She is a real blessing form the stars.
History:When she was 7 she found a small pup that joined.She then adtoped this pup and named it Soku,Her father was named Soku.But she had never got the name of her mother.Ever since the adoption her life his been filled with joy,Not only joy,But worry.
Crush:
Mate:No one ever mated with her nor did she want a mate.
Kin: Soku (Adopted)
Other: