Q & A With Red Haircrow discussion

Mod
This will be a combination of both personal and professional tasks I'm working at or highlights of my day.

Mod
4 March--Posted an article at my blog site Song of the Universal Vagabond, titled "Helping Others in Literary Pursuit". It's about those times when I have a bit of writer's block but I concentrate on my review/interview site instead Flying With Red Haircrow, or chatting with others about their writing.

Mod
This is a PRE "doing" for 5 March: Going to miss a pow-wow tomorrow because I'd forgotten about it! Have scheduled tutoring sessions for my son, no canceling, especially as he needs the help. Will just have to wait for the next one in April, most likely.

To read a blog/photo journal entry of a pow-wow I attended October 2010, please visit "The People: The Power of the Pow-wow" . It was a particularly special day, and the pictures came out well.

Mod
Finished a submission titled "The Angel of Berlin". I should put up an excerpt from it on my GLBT Bookshelf page http://bookworld.editme.com/redhaircrow All my other works in progress are there, as well as titles to articles I've written, etc.

Here's the description in any case. It's a story I began in 2004 or thereabouts, after I had a dream of the whole tale in it's entirety. In the same manner I wrote my story, The House of Doom, Dreams and Desire, which was also one of my dreams.

Description: When Robin, a first year university student, saves the life of a beautiful young man, he finds he's made a devoted friend. But without memory and voice, the newly named Angel is a mystery, occasionally exasperating with his child-like qualities yet possessing a strangeness which makes Robin wonder what type of being he's really taken in.

Mod
If you don't necessary read my blog, just...it's deep right now. When I wrote "I have to dance, grieving for a suicide", it was a personal message. There's a lot of people who say they support gay life and feelings, and read a lot of the "books", etc. but they don't really understand what we go through on a personal level everyday. That's why you don't find me jumping on any group bandwagons etc. I fight daily on the streets, and most people will never know what we see there. And many don't really want to know either, it might upset them and they want their world just as they wish it to be.

A young friend of mine suicided on Thursday, last week. 22 years old. Trying to live life yet conflicted by the harsh and insensitive opinions and stupidity by some who call themselves Christians regarding those who are homosexual or questioning. The homo-ignorance levels is a so-called "enlightened" society and among those who believe they really are helping gays by supporting fiction writing....it is not doing it. Not for at-risk and in danger youth.

Mod
Are you one of those people who use the "f" word to refer to gay people, even playing with your friends? Some of us don't like it, don't think it's amusing or flattering or a part of the "in" slang. In fact, some feel it is no better than other racist terms used to refer to people of color, even if it used with people who don't mind or 'among their own.'

Mod
Thursday nights are "Indian Ed" night, as it's the weekly meeting for Native American children, their families and anyone else interested to come by our classroom. We do Native crafts, storytelling, research, etc. and every 2nd Thursday we have drumming and singing.

Tonight was wild as usual. The kids are high spirited and total rolling stones, and someone brought snacks. Yes, they brought sugar snacks. I learned a long time ago NOT to bring Moutain Dew and sweet stuff as it sends them into new heights of frenzy...which I don't mind. I think it's hilarious, but the parents were a little exasperated.

They were making bracelets, suppose to, but it all dissolved into paperball volleyball as myself and members of the advisory committee made plans for upcoming meetings. Almost got talked into speaking at an intercultural community meeting on the 19th of April, but fortunately I don't have to :-)

Mod
If you hadn't read, I am also a Psychology graduate student. I've approximately nine months more before I obtain my degree, with an internship as my choice. I have not decided which field specifically I wish to go into, but it is unlikely I would choose to practice in a traditional clinical setting.

So in additional to whatever else I am doing: full-time job as a private chef, writing, reviewing at my website and managing my book store...I still have my studies to consider.

Mod
Registered for next semester that begins on August 10th, Social Psychology and Earth Science I think so far.

Running between raindrops here in Berlin, as it is being it's beautific, fitful self: blue skies and sunshine one moment, then after a stiff breeze dark ominous clouds and a thorough downpour. Then back to sunshine again. It's how you see people walking in shorts and flip-flops (visitors or the adventurous) or people in leather coats with scarves on.

Sunday afternoon, and my new roommate who is a well-known film producer, screenplay writer and base guitarist is practicing in the living room. It's a nice backdrop to creativity.

Mod
At the moment, trying to finish by gay novel "The Agony of Joy"....

Here's the original blurb and description, though the characters have morphed the storyline somewhat:

Blurb: "The life, love and struggle of two men to overcome their separate past agonies and allow themselves to experience the full joy of true love."

Description: "Former model turned actor Adrian Lee can barely list age range '23-29' on his resumé anymore nor stand his life of empty social events and appearances, meaningless roles and casual partners. When he meets Alexander Skizetsky by clever arrangement of his agent, the enigmatic yet infinitely attractive Russian kindles a little light of hope in his aching heart. Yet even the beginnings of a romance beyond his wildest dreams cannot assuage a life spiraling out of control.

The long estrangement from his devout Irish parents and family and the dark secrets they all share combine to drive him to the brink of despair though Lexx is determined to stay by his side. After locking away his own memories of betrayal and loss, Lexx had decided never to love again but something in Adrian spurs the noblest intentions of his formerly jaded heart. Returning in pilgrimmage to his homeland, he brings Adrian along on a journey of rebirth, revelation and romance."

An excerpt can be found at my GLBT Bookshelf page: http://bookworld.editme.com/The-Agony...

Mod
My playlist thus far for today (yea, I listen to quite a range of music):


"Mystery Girl" by Roy Orbison
"Fire on the Mountain" by Marshall Tucker Band
"Sherry Fraser" by Marcy Playground
"Dein Glücklich" by Söhne Mannheims
"Possum Kingdom" by The Toadies
"Don't Call Me Daughter" by Pearl Jam
"You Get What You Give" by The New Radicals
"The Blower's Daughter" by Damien Rice
"Turn My Head" by LIVE
"Epiphany" by Staind
"Big Log" by Robert Plant
"Silent Lucidity" by Queensryche
"The Man Who Sold the World" by Nirvana
"Lucky Man" by Emerson Lake and Palmer
"Sundown" then
"The Wreck of the Edmund Fitzgerald" by Gordon Lightfoot
"Sarah Smile" by Hall and Oates
"I Walk the Line" by Johnny Cash
"Femme Like U" by K'Maro
"Cool Change" by The Little River Band
"Every Breath You Take (I'll Be Missing You)" by P. Diddy
"Tennessee Flat Top Box" by Rosanne Cash
"Ich Bin Schnappi das kleine Krokodil" by some little girl ha!
"Kiss Them For Me" by Siouxsie and the Banshees
"Copper Head Road" by Steve Earle
"Va pensiero" by Zucchero & Sinead O'Connor (Verdi's "Nabucco")
"Human Behavior" by Björk
"Uninvited" Alanis Morrissette
"Chop Suey" by System of a Down
"Eurotrash Girl" by Cracker
"Tangerine Speedo" by Caviar
"Blister in the Sun" by Violent Femmes
"The Witch of Westmerlands" by Archie Fisher

That's a typical day for me, though sometimes I'll get in a certain mood and listen to goth metal or hard rock or totally back the other end of the spectrum into neo-Renaissance music.

Mod
Day-time temps are around -14°C where I am, so in trying to remember warmth, I thought I'd post a photo journals of pics I took last summer, here in Berlin.

Here's the first in the series: my friend's baby eating blackberries right from the vine... 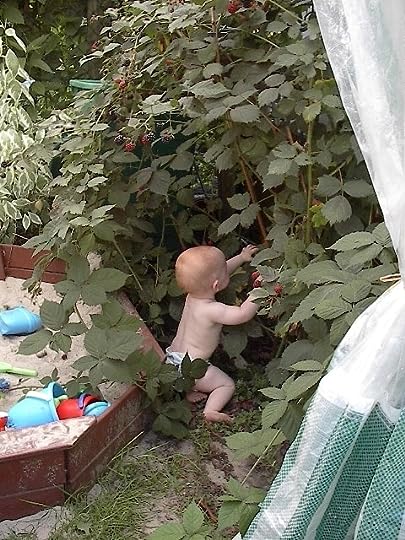 Check out the rest at my blog, Songs of the Universal Vagabond, and see summer life in Berlin and Land Brandenburg. http://redhaircrow.com/2012/02/02/in-...

Mod
It's busy and it's been hard at times. I had to put all my fiction writing projects on hold to finish my memoir, a biography and poetry collection, as I felt it necessary for emotional health to get out some of the memories of my past. Also, working with author Nephylim to publish the next books in her Enigma series.

Otherwise, finished another semester at university, and far closer to finishing my degree. After three extra years of study, yea, I'm ready for that final break. Who knows if I will practice as a Psychologist, but we'll see.

Despite suffering a stroke in April, following heart surgery December 2011, I started a part-time job to help ends meet last week. So another cog in my wheel. That's what been going on with me. Things have been hectic lately as I have less time for writing and publishing, but one does next more time to rest also.

Some of my latest posts at my website http://redhaircrow.com/

"Near Death Experiences: “Where You’ll Find Me”

"Listening to Others: A Flash Memoir of an Old Piano Player"

"Homo-Ignorance: Are You Part of the Problem?"

"The Lingering Effects of the “Kiss” of the Spider"

Posts elsewhere on the web:

At Friendzstop "What Does “Gay” Mean To You? Literary Circles and Political Scenes by Red Haircrow"
http://friendzstop.com/?p=536&opt...

Mod
Even with problematic health, my daily schedule usually consists of working outside my home 5 hours a day, an hour's commute each way additionally...

Over three dozen books in queue to review for my website, so reading at some point...

Writing on the numerous articles, WIPs, updates, advertising & marketing campaigns for myself and clients...

And all the other incidentals of life besides trying to take my medication when I'm supposed to, shopping and dealing with the endless bureaucracy of my country.

Q & A With Red Haircrow

The House of Doom, Dreams and Desire (other topics)