The fox
Animals recur throughout Gauguin's painting, and the artist's love of the fables of La Fontaine suggests that animals may have carried particular symbolic and allegorical meanings. The fox is often identified with a spirit of perversity, particularly sexual, as in a particularly pregnant symbolist painting made in Brittany, "The Loss of Virginity," from which this detail is taken. 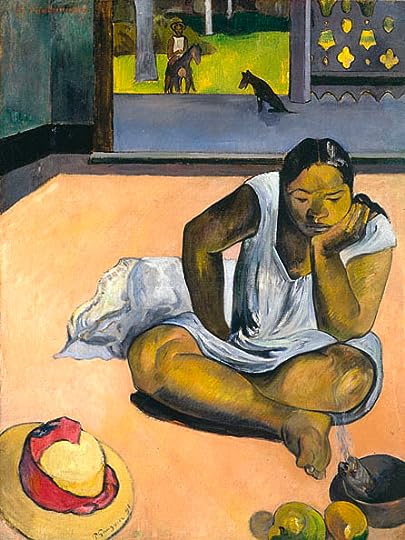 Horse and Rider
In two of the exhibition's most powerful, and enigmatic, paintings, figures of a horse and rider are seen through an open window. In one case, he is arriving; in the other, departing. Does he have a relation - benign or predatory - to the women depicted in these canvasses? Or does he depict a general sense of a journey, or a movement through time, connecting the stationary figures to a larger sense of time and destiny? 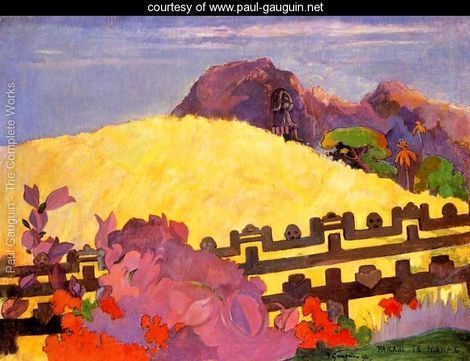 There Lies the Temple
Paul Gauguin

Easter Island
The Tahiti that Gauguin hoped to find was mostly a literary fiction. By the time Gauguin arrived, much of the island culture and its religious heritage had been decimated by colonialism. But the painter sought to re-create it, and he freely borrowed from other religious traditions to repopulate his adopted home with ancient-seeming icons, , including this recurring figure of a statue reminiscent of the carved giants of Easter Island. 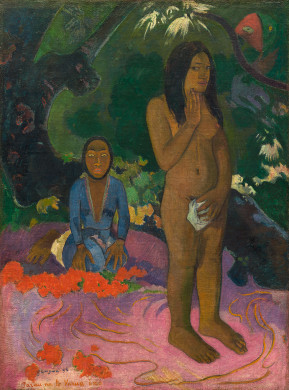 Words of the Devil
Paul Gauguin

Exotic Eve
Gauguin's fascination with Eve predates his time in Tahiti, as does the basic outlines of his Exotic Eve, a powerful woman standing in a demur but unembarrassed posture, often with her hand touching her cheek. She is frequently encountered juxtaposed with images suggesting interloper figures, including dark presences suggestive of the original temptation and fall.

Thank you so much for Gauguin in the news!

Thanks for the suggestion, Monica. I added it to my tbr book list but don't know when I will get to it. I read the reviews that you, Dvora and Amal wrote regarding Gauguin and van Gogh. I think I tend to lean more toward the 'dislike' for Gauguin that Dvora shares. I have grown to appreciate his work, but he is NOT my favorite to say the least!

I'm in agreement with you, I just get drunk with Gauguin's colors! 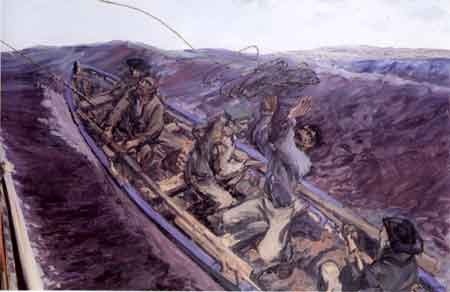 Off the Donegal Coast
1922
Irish School
Oil on canvas

For the Road
1951
Style: Romanticism

Thanks Heather. I am not familiar with Yeats. 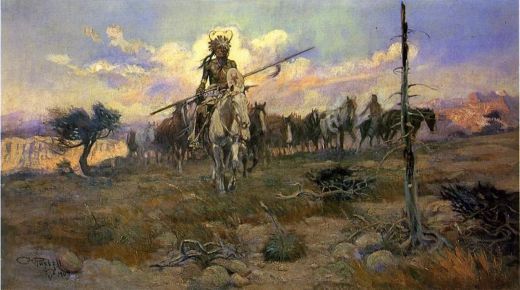 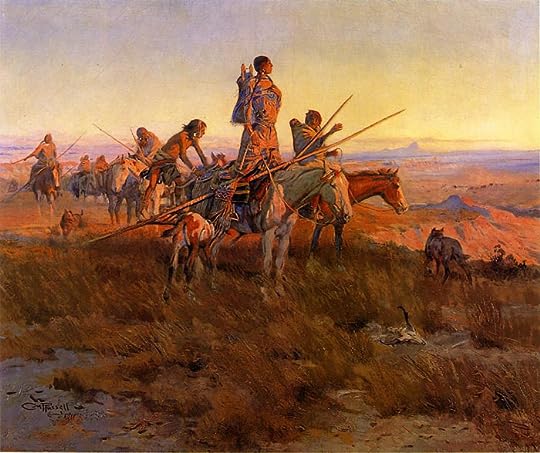 In the Wake of the Buffalo Hunters, Charles Marion Russell, 1911

It's a fact the Irish didn't have money to buy paInt and canvas. Their poverty lead them to be writers. 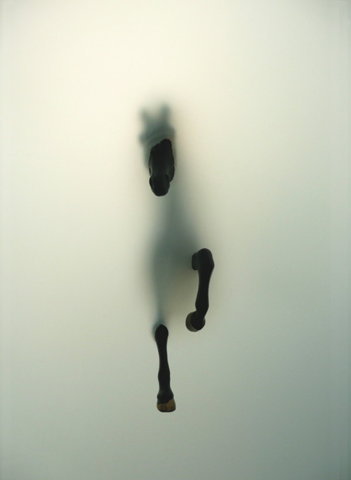 WoW, Carol, how do you find these images?? 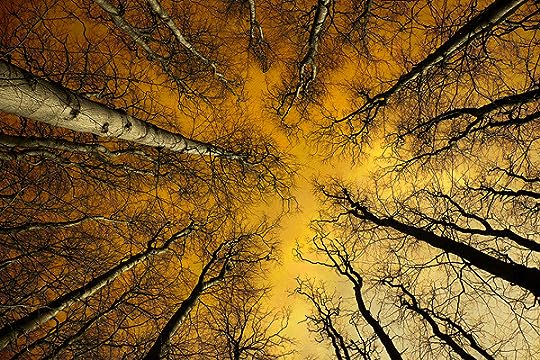 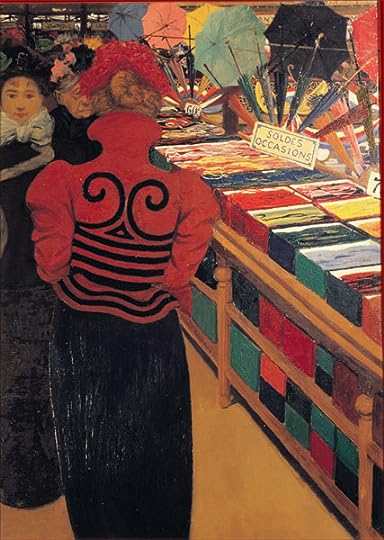 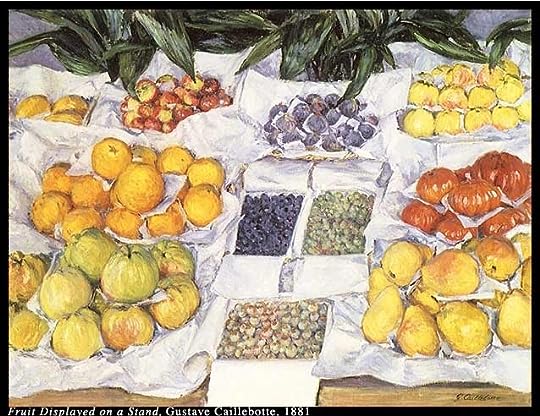 But I've never seen either in real life.

Do you know where they are?

The Caillebotte I'd like to try to see someday. It's at the Museum of Fine Arts, Boston.

The Vallotton is much more out of the way. I found a photo crediting the Fondation Felix Vallotton in Switzerland.

I was going to suggest a road trip. That one in Boston is lovely and the one in Vallotton looks wonderful! Boston, I can do.

If you visit the mfa Boston, check out the new American Wing that opened in Nov. 2010. I heard Very good things about it.

It's been raining all night and all day -- don't leave home without your umbrella!
[image error]
Jonas Hanway, The First Englishmen who Ever Carried an Umbrella

Hanway’s umbrella was, of course, a take on the parasol, an object that had done its own share of traveling. Since 2400 B.C.E., it had been carried over the heads of the nobility throughout the Middle and Far East. In this part of the world, the man of respectable station, wanting to distinguish himself from the masses, kept his skin fair by shielding himself from the sun. The parasol had entered the Middle Ages, held high over the heads of Catholic popes and bishops, serving as a sort of flag or standard. As the Church’s influence waned, the ombrello or “little shadow” had become a fashionable article among Italian women before making its way north.(wikipedia)

[image error]
A Terracotta Army carriage with an umbrella securely fixed to the side, from Qin Shihuang's tomb, c. 210 BCE. 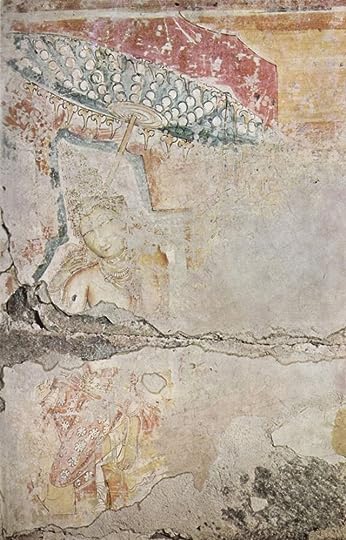 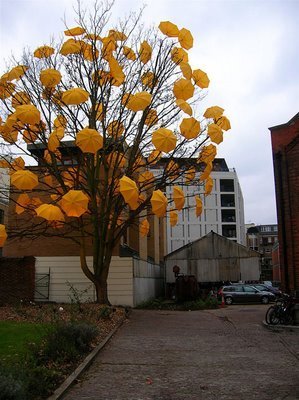 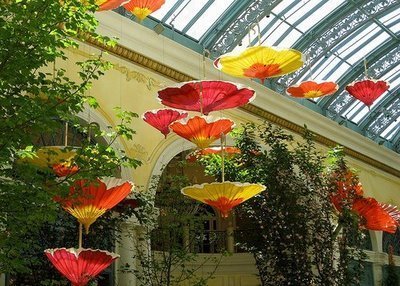 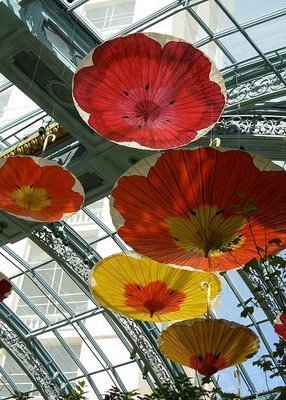 I was lucky enough to go and see Christo's Umbrellas. Wish I could find the photos. I'd post some here.

Here's one plucked off the net. 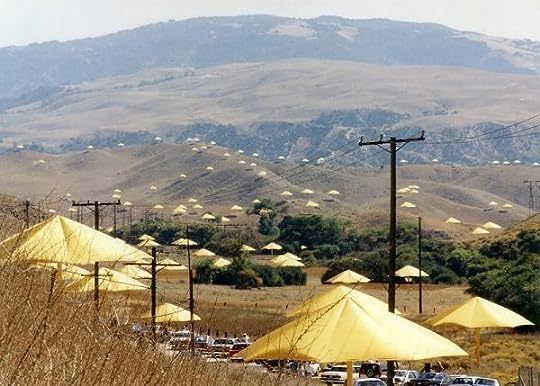 I was only familiar with Christo's umbrella. Thanks for posting the other ones, Carol!

Especially the one of the Beatles!

When the Umbrellas were up here in California, I started to make plans for my Art History class to go and see them. There was an information number listed in Artweek, so I called it to ask some questions about taking groups. A woman with a throaty voice and a heavy French accent answered the phone. Turned out it was Christo's wife, Jean-Claude.

I love all the umbrella pictures! 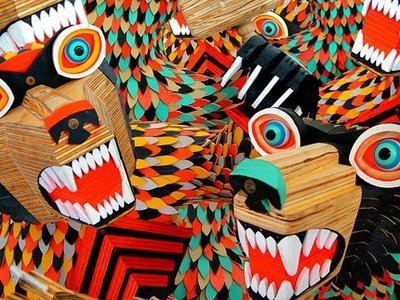 Above, Gauguin's 1898 painting, Faa Iheihe, or, To Make Beautiful.

A portion of the National Gallery in Washington, D.C., has the look of a tropical paradise these days. A major exhibition of works by 19th century post-Impressionist Paul Gauguin includes oil paintings and other objects he created on the South Seas island of Tahiti. But the real Tahiti bore little resemblance to the one Gauguin depicted on his canvases.

In the 1870s, Gauguin, married with five children, was working as a stockbroker in Paris. He started collecting art, then began creating art, and thus began to rewrite his narrative.

"By the early 1880s he can no longer abide his life as a bourgeois gentleman, father, husband and Sunday painter. He needs to be an artist," explains Mary Morton, National Gallery curator. And so he travels to Polynesia, where apart from a few trips out, he stays for the rest of his life.

The paintings, wood carvings and ceramics he made in Tahiti are full of bare-breasted, native women — voluptuous, sensuous. Gauguin's 1899 painting Two Tahitian Women "could serve as a pinup in a tourist bureau," Morton says. 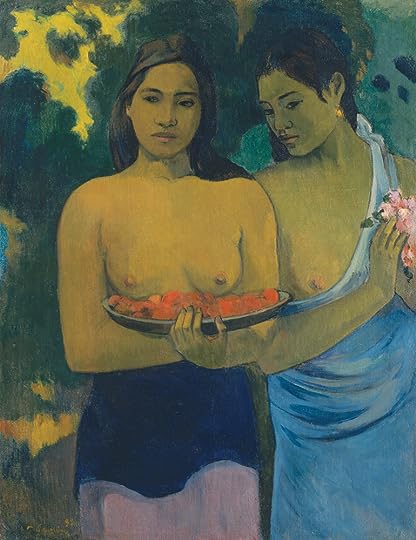 By the time Gauguin arrived in the late 1800s, Tahiti had been "thoroughly Christianized and colonized" by the French, says National Gallery curator Mary Morton. Women didn't walk around half-nude — but Gauguin painted them that way anyway. Above, an 1899 depiction of Two Tahitian Women.

It's a glamorous vision, but a false one. The artist had hoped to find such exotic, half-clothed beauties — but did not.

"Tahiti was a French colony," Morton explains. "It had been thoroughly Christianized and colonized. The women were not walking around half-naked. ... They tended to be wearing ... Christian missionary gowns."

Still, on his canvases, Gauguin took off their clothes and bared their undressed beauty. In his 1892 work The Delightful Land, Gauguin depicts Tahitian Eve in the Garden of Eden. An exotic flower takes the place of the apple from the Tree of Knowledge. A lizard with flaming red wings substitutes for for the Bible's serpent. 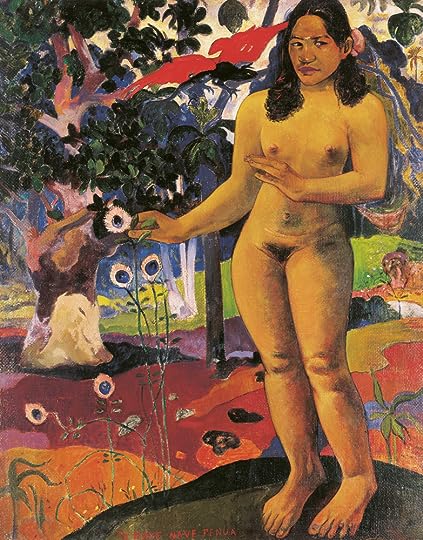 Gauguin depicts a Tahitian Garden of Eden in his 1892 painting Te Nave Nave Fenua, or, The Delightful Land. Gauguin paints a strong, stocky Eve — who, if you look carefully, has seven toes on her left foot.

Over the centuries, hundreds of artists had rendered images of Eve. But their work reflected Western ideals of beauty — "white, small waist, small little feet, polished skin, no body hair," Morton says. Gauguin's Tahitian Eve, however, was different: "Broad shoulders, strong legs, pubic hair," Morton describes the image. "And then the most extraordinary thing about her — is her feet." Tahitian Eve has enormous feet — with seven toes on the left foot. That's how primitive she is, Gauguin seems to be saying.

It was all too much — the bizarre figures and the sunset oranges and fuchsias — for European tastes. When Gauguin brought 44 canvases back to a Paris gallery, only four of them sold. (Today, Gauguins go for tens of millions.)

"I am a savage," Gauguin wrote. "And civilized people suspect this."

And perhaps they were right to suspect him.

"He's a liar; he's a real liar," says Morton. Gauguin was a great artist. He wasn't Margaret Mead, carefully examining an island and its people.

"Gauguin was not an anthropologist," Morton says with a laugh. "He is using all of this as material for his own imaginative production."

The title of this exhibit at the National Gallery of Art (it was organized by the Tate Modern in London) is Gauguin: Maker of Myth. And that myth is crucial. When Gauguin's dreams of paradise collided with Tahiti's harsh realities, his imagination informed the body of his Tahitian creations.

"This is one of the problems with Gauguin's work," Morton says. "You know that he's making things up, but it's so seductive that you just have to reckon with it." 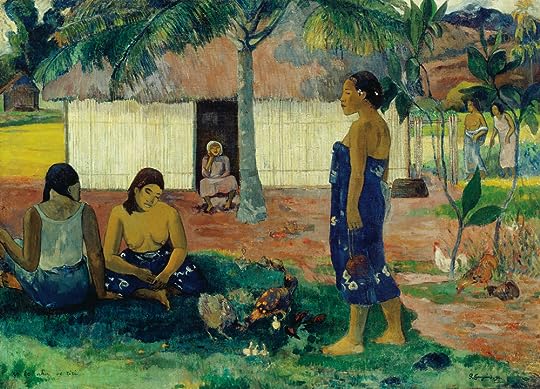 It's widely accepted that artists reinterpret reality, but the trouble is that Gauguin insisted that his depictions of island life were true — factual representations of a serene, sensual, primitive place. The French tourist industry was something of a co-conspirator in this; it wanted tourists to travel to the Polynesian colonies. And so it, too, underscored these images of lush, seductive destinations. These mass-marketed myths fed the fantasies of bored Europeans who were longing for something exotic, just out there somewhere, waiting to be discovered.

Eventually, Gauguin got bored with island life; he was poor and fell ill. He wrote to a friend to say that he was thinking of coming back to Paris — but his friend advised against it. You built your reputation as the exotic artist in exile at the edge of the Earth, the friend advised. If you come back old and decrepit, you'll wreck it. And so Gauguin remained on his remote island.

"He dies alone," Morton say, "sacrificing himself to this myth that he's constructed. It's just heartbreaking."

How many people looked carefully at 'Eve's' toes on her left foot just to count them? I did!

I counted 3 times, and still only came to 5.

I had to count several times, too. I think they are counting those little 'stubs' in between the third and fourth, and fourth and fifth toes. It's kinda hard to see.

I guess so. Those look more like spaces than stubs to me.