note: This topic has been closed to new comments.
30 views
Feeling Nostalgic? The archives > What's happening at the Academy Awards and what do you think about that?

Mod
I'm not seeing any of this until the highlights tomorrow. Fill me in, please!

Be glad you didn't see Kirk Douglas. He would chase you through your nightmares.

Married to a beautiful woman.

Who is Kirk Douglas married to?**


**first one to say "Mrs. Douglas" gets smacked!

I think she mean Michael Douglas who is married to: 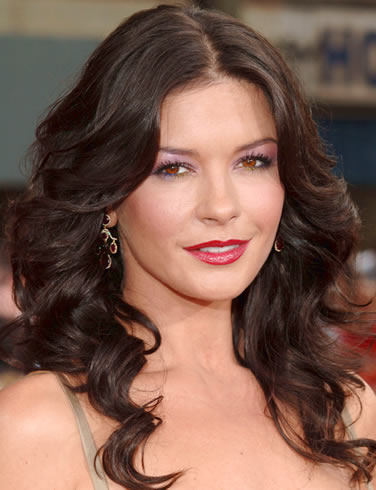 reply | flag *
message 9: by [deleted user] (new)
Feb 27, 2011 08:56PM
Just a general Meh pointed randomly at the Oscars, Anne Hathaway, Michael Douglas's wife and anyone else who happens to get in my firing line.

Why did they have Kirk there? Well, at least he was having a good time, but I think he was the ONLY one having fun during his portion. To think he was Sparticus.

That was one of the most boring Oscars I've ever seen. And what is with Franco? He never even looked at Ann. Bring back Billy Crystal please!

Colin, as always, was adorable.

When they showed Harvey Weinstein I almost vomited. (I used to work at Miramax, the man is a pig!)

It was a bit dull, but I did love Colin. I really wanted to see him do a bit of dancing, though.

I think they were trying to be the "young and hip" Oscars, which made the whole Kirk Douglas thing a bit mystifying.

Why are we not talking about clothes? Jennifer Lawrence. Curves. Whew.

I didn't watch much.

I only saw a little. I can't stand awards shows. From the dresses I did see, there wasn't much I didn't like. I thought Annette Benning and Cate Blanchett were the worst. I didn't like Nicole Kidman's dress, either.

But they weren't horrible.

I did see some of Kirk Douglas. That was just wrong.

@ Lori "Bring back Billy Crystal please!"
I think he was one of the few highlights of the show. I would LOVE to see Hugh Jackman or Neil Patrick Harris host again. I thought they both great. This Oscars was very vanilla. Franco and Hathaway were more entertaining in the commercials for the show. They just didn't work for me.

Hathaway was decent, but Franco had no energy at all. That laid back thing is his style, so I don't see why they thought he'd be good for this. The young-and-hip jokes were so forced. One of them was stolen directly from Saturday Night Live (the one where he pretended to have an issue with the scandalous title of Winter's Bone). The autotuned musical moment was just weird. The opening skit was decent though - Alec Baldwin! - and Anne Hathaway's musical number was weird but better than most of the nominated songs.

Yeah Sarah I agree. Franco was a wrong choice for sure. Hathaway had energy, and seemed genuine, I ended up liking her. And wow, was I surprised she can sing so well.

The funniest part was Ann Hathaway singing that song about Hugh Jackman. I felt sorry for poor Kirk Douglas. He should have had a partner to keep him "on point". But younger people don''t watch TV. They are too busy playing video games, talking/texting on their cells, playing sports, on the 'net. Young parents are too busy putting their kids to bed then cleaning up after them.

Sometimes, when Michele makes hilariously broad generalizations about groups of people, well, I don't know what to do.

Michele wrote: "The funniest part was Ann Hathaway singing that song about Hugh Jackman. I felt sorry for poor Kirk Douglas. He should have had a partner to keep him "on point". But younger people don''t watch TV...."

Mindy and I were chatting about how it felt like a good deal of the show was aimed at a demographic that was a good deal younger than us. I think Kirk Douglas and Bob Hope were meant to be the counterbalance.
I think the Kirk Douglas thing was hard to watch because you spent the whole time he was on stage worried that he was going to say or do something bad. He actually didn't (ok, other than copping a feel as they walked off the stage) and I think he was kind of funny if you take away the awkwardness.

I guess in between are the people who tune in for the fashion, the glamorous stars, the speeches, the actual awards and the chance to snark about it all?

Oh, I was agreeing. They aimed all the jokes at under twenty and over seventy, and assumed everyone in the middle would tune in anyway.

RandomAnthony wrote: "Why are we not talking about clothes? Jennifer Lawrence. Curves. Whew.

I didn't watch much."

She's got a killer bod but I didn't love that dress. It didn't seem dressy enough for the Oscars.

Five highlights of the broadcast:
1)Colin Firth's speech, though I was rooting for him to break out the threatened dance moves.

4)The Inside Job director's jab at wall street and all of the technical winners who gave shout outs to their unions.

5)The kids singing at the end, and then the winners coming back out and Melissa Leo belting it out along with them.

Five low points:
1)The lack of a score montage, with or without interpretive dance. The scores were fantastic and deserved some notice.
2)That awful auto-tune pandering to the Twilight lovers
3)James Franco, who I normally like, was just too chill
4)the songs. I like Randy Newman, but that was nothing special, and the others were all worse.
5)nothing really exciting...

I loved the dress Mila Kunis wore. Even though when I first saw it from far away I thought she had tattoos on her breasts. 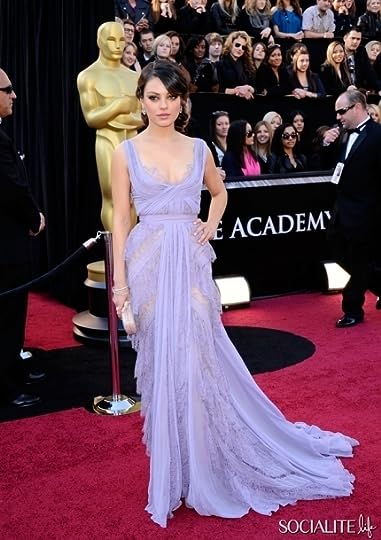 Michele wrote: " I felt sorry for poor Kirk Douglas. He should have had a partner to keep him "on point"


Frankly, the producers should be prosecuted for elder abuse.

I didn't watch the show, but I was highly amused by the frequent and snarky comments on my Twitter feed. It was like sitting in the back of the classroom listening to the class clowns.

I really liked Scarlett Johansen's dress too but I can't find a good picture. The colors didn't look great on the red carpet. I hate the stupid red carpet. I wish it were a more flattering color.

I thought that she had tattoos too, Smetch.

Pat, I had fun checking in on the facebook feeds and the AVclub's liveblog. One of my facebook friends nearly got himself deleted, though. He kept snarking about the wrong things.

yes, the face didn't go with the dress.

I was annoyed that most of the dresses were beige/nude/gold colored. Also, there was too much sparkle for my taste.

I often dislike fancy-dress-hair so I just try not to look at it.

Yes she did. It might be a bad cut, but she could have at least brushed it!

Mod
RandomAnthony wrote: "Sometimes, when Michele makes hilariously broad generalizations about groups of people, well, I don't know what to do."

I snicker, chuckle, and occasionally guffaw.

Mod
There was a picture in the Denver Post this morning of Scarlett smiling a weird open mouthed grin that made her look weirdly methy and ungroomed. 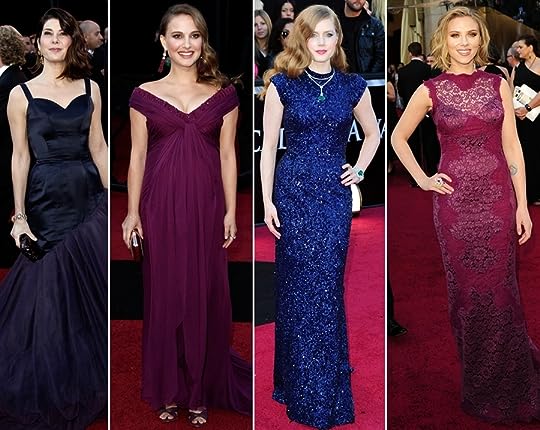 Marisa Tomei looks beautiful, I thought Natalie Portman looked amazing in that plum dress - soooo much better than the pink one she wore to the Golden Globes, Amy Adams looked very good in blue but what's with the green jewelry?, and Scarlett was a mess.

I'm sorry, Scarlett is a beautiful woman, but the dress was bad with the lace cut out business, and her hair just looked messy in a bad way.

natalie portman looked better than she's done in months. same goes for amy adams, but she should have ditched that necklace.

Do you think Marisa Tomei goes to these Oscars events and thinks that maybe everyone thinks she didn't deserve her Oscar?

I think Marisa no longer has anything to prove after her role in The Wrestler.

Hilary Swank needed a necklace or earrings, or a less severe hairstyle with her dress, which wasn't terrible, although I didn't care for the feathers: 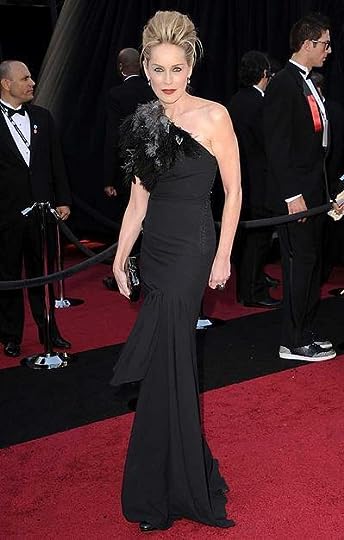 Was Sharon Stone trying to channel the Black Swan, maybe?

swank does look a bit naked, apart from the dress, like she's dressed but not yet accessorized.

mick jagger showed up at the vanity fair oscar party wearing something wrinkled and satiny that looks like a suit: 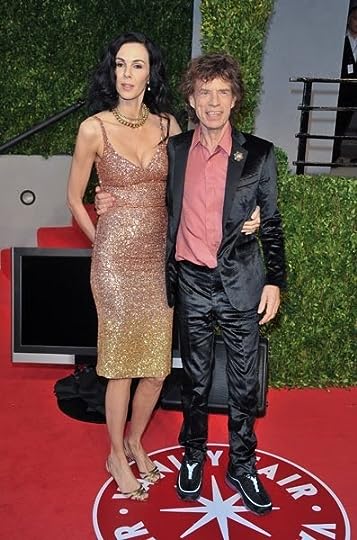 and you neighbor's kid's shoes.

everyone who's got a girl crush on eva mendes, look away now. 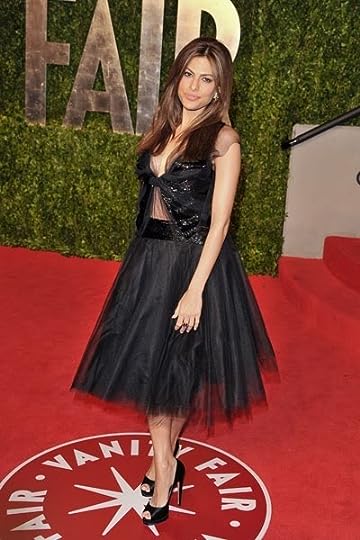 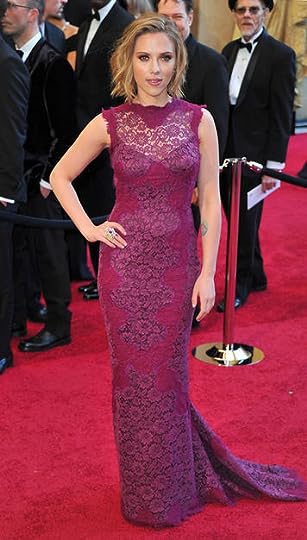 Mod
janine wrote: "mick jagger showed up at the vanity fair oscar party wearing something wrinkled and satiny that looks like a suit:

and you neighbor's kid's shoes."

Oh shudder. Him and his date.

Jennifer Lawrence's dress seemed to be adapted from a Baywatch lifeguard swimsuit. 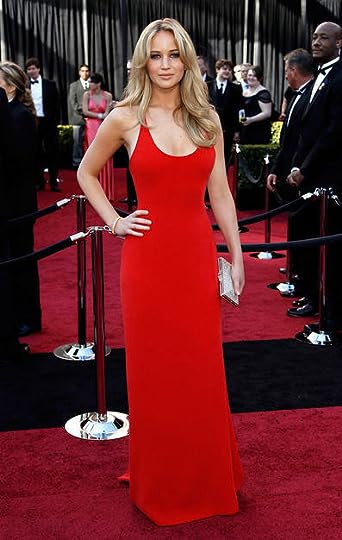 Mod
I have nothing against Jennifer Hudson's dress, I just don't understand her boobs. They seem impossibly high for a woman who has lost a ton of weight. Are they totally reconstructed? 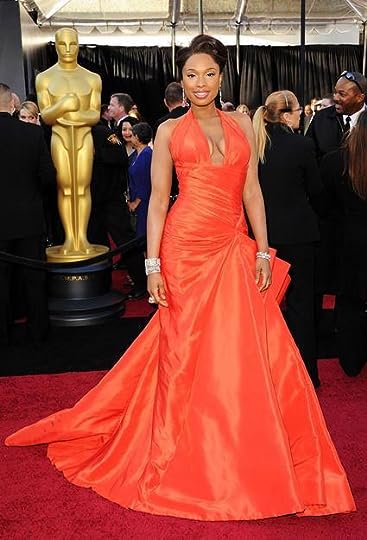 LG, probably yes. When you lose that much weight, all of your skin sags all over the place, so she probably had them lifted when she had the skin removed. If I had the money, I'd do that too!