Name: Lee
Age: 17
Gender: Female
Appearance: http://2.bp.blogspot.com/_Wa-jOwXIQII...
Personality: Kinda dumb but very smart, not socal
History: Lee has a very rich family and he has been homeschooled her entire life untill her father decided that she needed real frinds and with that Lee's father cut her off. Her father told her she will start school and live there, and she will have to EARN her own money.
Other:
New student or old: New student
Chrush: Milo Ebo

Other: has southeren accent 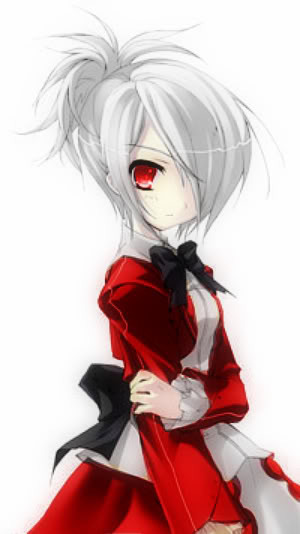 History: Her parents abandoned her at birth as she was forced into an orphanage. An elderly couple adopted her & a few years later, at age 12, they passed away, leaving Snow their house & riches.
Other: Hates having friends that only like her for her money.
New or old: New

Name: Emerald
Age: 15
Gender: F
Appearance: http://www.google.com/imgres?imgurl=h...
History: She bought a kitten to fill in for her lost father. Also, she has a short temper ever since she was young. She never kissed a boy before and she was raped by her dad before he left.
Other:
New student or old: New

Ummm should I create a guy since everyone right now is a female?

Personality:Cocky, dark, adventureous,talkative, funny,violent, hot-headed,and cares for others more than he can care for himself at times. He can be a bit of a tough guy but is very nice, when he wants to be. Easily irritated and doesn't put up with a lot of craziness.

History: He always seems to be thinking when he's not talking. He knows the school well and is the go-to-guy for advice. Behind the scenes of his tough guy act he is very comforting and understanding, though he doesn't like to share his feelings. After girlfriend's (Lily) death it was said that he doesn't seem to care but he always has a picture with him that he looks at and visits her grave weekly.

Other: He is bisexual, loves gum (or any type of candy), will do favors for candy. He likes to fight or argue when he's upset. He likes to joke around but at times gets carried away. (To sum this all up, he's your typical guy.)

Personality: Calm, laid back, quiet, intelligent, atletic, tough, dark, cocky, popular but a loner. He rather help himself first then help others after.

History: Used to be best friends with Leon, now they're are rivals. He was always a lonely child but became a big shot when he started school. He's known to be a jerk. He comes from a very rich family.

Other: Don't let the glasses fool you, he a fighter and a real good one.
New student or old: Old.

Thanks for getting it there I don't know what was wrong with it. But like yeah. lol. Umm so what do you think of Leon and Milo?

I like em and im sure my charrie will have a crush on both..lol.

Lol wow thanks! Now for the third boy, he is going to be different. More like a hip hopper, to add some more flavor to our mix! lol That seem cool?

Personality: Outgoing, funny, prankster, lazy, talkative, loud, (obnoxious sometimes) wild, ladies man, party animal, goofy, kind, and caring.Born and raised in the city. T.J is into hip and all kinds of "fly" beats of today. Not the samrtest one is the classes but not the dunbest.

History: He is friends with both Leon Gray and Milo Ebo. Though he's never with both at the same time he keeps a nice friendship with both. He was best friends with Lily (deceased) and was devistated by her death but soon got back on his feet. He is back to his normal self but if the topic of Lily or anything that gives his a memory of her, T.J. will leave the room.

Other: He's not much of a fighter, more of a peace maker. He may seem troublesome but if Milo and Leon are goig to throw some punches, T.J.'s the one to break it up. He just broke up with his girlfriend two months ago and is looking for someone else now.

Whoops! I forgot his appearance! Xp

Which is your favorite?

mainly his personality...thats like my type in real life...plus im a sucker for glasses. lol.

Lol sweet, I developed him in contract to Leon.

Well, I'll see if I can hook Lee and Milo up. Lol just maybe. Get some sleep, I'm going too.

You guys gonna rp or what? lol

Come on, who do you want?

when u go to my page, under my profile pic it says my pics.