Name: Lakai (Luh-kye, goes by Kai)
Age: 18
Appearance: Kai
Shape: panther
Personality: tough, hardcore, brave, outgoing, friendly, protective, but when alone or with one other person, he is quiet and thoughtful, and the softer side of him comes out
Crush: open

SOMEONE!!!! *tackle hugs back*

ik but i thought you made that part up. but now who is she gonna like SOMEONE MAKE A CHARRIE SHE CAN LIKE!

no i want someone to love her back

Gah, her picture got messed up, I have to find a new one: 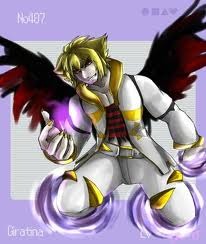 name: rex
age: 18
gender: male
Appearance: something like ninja gaiden
personality: sometimes silent, does not trust easily,
animal: tiger
other: his parents kicked him out cuz of his powers

reply | flag *
message 49: by [deleted user] (new)
Apr 03, 2013 03:07AM
Name: Spectrum
Age: 17
Gender: Female
Appearance: http://s6.favim.com/orig/65/piercings...
Shape: Unicorn (Duh! What else? :D)
Personality: Spectrum is very cold. Always pushing people away from fear of getting too attached and always finding the negative in any situation. She basically looks for trouble but she doesn't need to look very hard because the trouble comes to her. Maybe naturally. She doesn't do childish pranks. No, she's way past that. She'd probably the one behind the next bank heist. She's actually more smart than she is tough but she acts like a 'bad girl'.
Crush: None
Other:

reply | flag *
message 50: by [deleted user] (new)
Apr 05, 2013 04:46AM
Name: Rhea Nadia Silver
Age: 15
Gender: Female
Appearance: Rhea in human form
Shape: Rhea in animal form (palomino horse)
Personality: Rhea is an eccentric, abnormal loner, who was always considered 'uncool' by the people who knew her best. She is not very level-headed as she tends to be side-tracked, but she is very independent and knows a lot about useless trivia that doesn't matter in the real world. Rhea, although she can make people laugh with her odd habits, is always serious about things, and if she says something funny it's always an accident. Most say she's crazy, or at least a weirdo, but the kinder ones just say that she's different or unique.
Crush: OPEN
Other: She has an older brother, Zach.

Name: Zachary Leonardo Silver (Zach)
Age: 18, turning 19 in a couple of months
Gender: Male
Appearance: Zach in human form
Shape: Zach in animal form (hawk)
Personality: Zach is often seen with a frown on his face as he tends to worry too much about trivial matters. He's always pushing to be a normal, 'cool' kid and often feels that Rhea, his younger sister, shows him up and embarrasses him in public. He can be very cold or he can be very kind; it depends what impression people want him to make. He's a bit on the worrier side, and tends to fear taking risks; some call him a coward, but Zach just wants to stay alive as long as possible. Like his sister, he is very clever, but he devotes his intelligence to important things and not 'useless' facts. He's not at all athletic.
Crush: Ashlea (if that's alright with you, Erica?)
Other: He has a younger sister, Rhea.