Mod
Delightful books! I have all four in a boxed set. I think they're still available that way. Do get them before your kids are all grown. They'll work for quite young children through adult, I think. My son still liked them though he's quite grown. Cats with wings would be so awesome. I can't even imagine how much more mischief the kittens could get into if they could fly. As it is it seems nothing's safe. I'll post a picture of Ghost tackling the high altitude dust bunnies near the ceiling if I come across it. 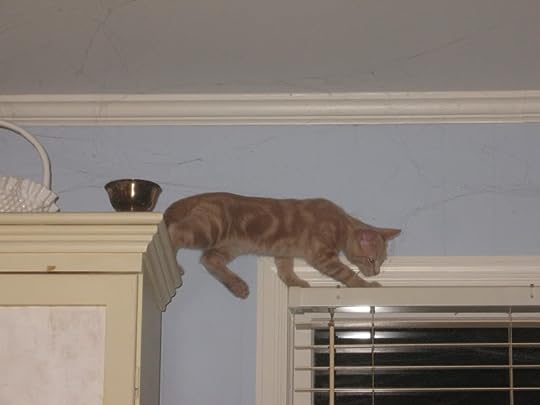 I hope this works!

I totally just lied in my intro post. I read these too, and loved them, but I read them out of my elementary school library (meaning I read them before I paid attention to authors AND I have no copies of my own) so I always forget they're by UKL.

I admit I should get these for the kiddies, especially if they are a UKL gateway drug.

In one of my UKL binges, I checked out a bunch of other UKL children's books, but they were very strange bindings, and funny little parables. I'll try to dig up the titles to those.

I got these for Christmas, in the boxed set: delightful! (As is Ghost.)

I should point out that Ceridwen only hates fictional cats: real cats are all good.

Mod
Here's another pic of one of my tiny death-ninjas, for whom wings might almost be superfluous. 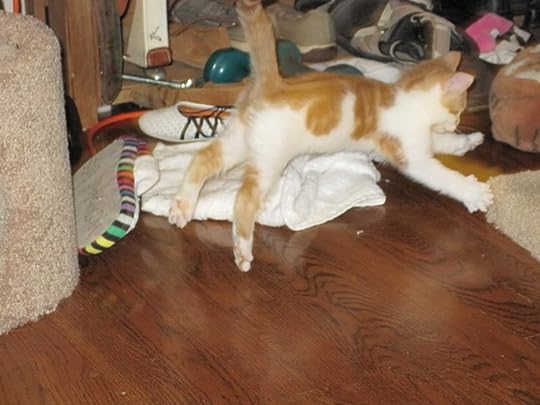 Mod
And one more of them playing their favorite game chasing a mouse suspended from the ceiling by an elastic band, which involves much flying. 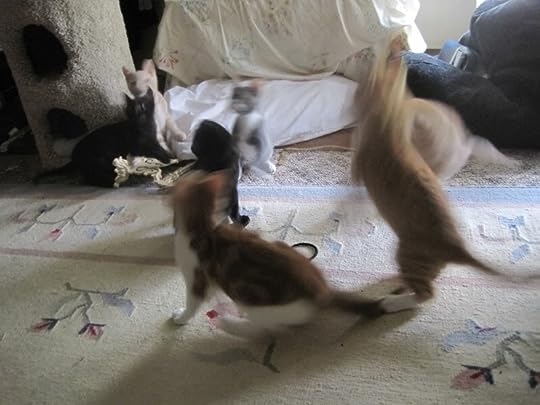 SQUEEEEEEEEEEEEE! BOOM! (That was my head exploding from cute-overload.)

Can you spare me a tiny death-ninja? I wants one!

I my gosh, Tat, those are wonderful pics! I'm a complete head-over-heels cat person. My wife says that if we weren't together I'd be crazy cat man with dozens of cats sprawled all over my house. I'm afraid she might be correct. My wife hates cats but her wedding present to me was a kitten. He died two years ago (at the young age of nine from a horrible heart problem). Then we got these two: 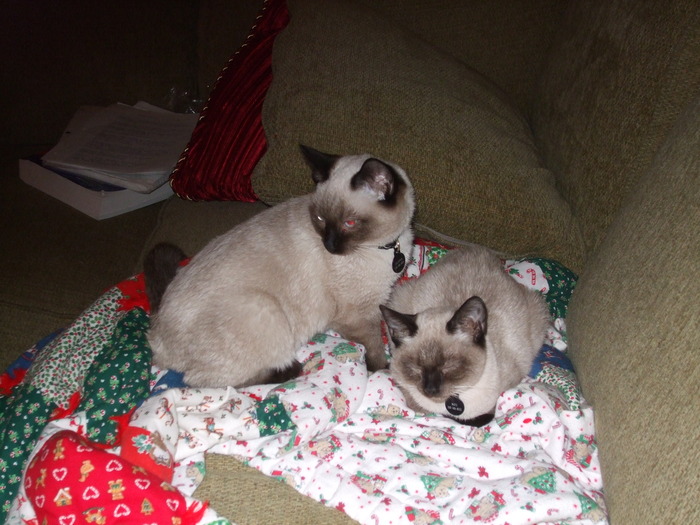 But your kitties are all adorable!

Tatiana, I also have an marmalade cat, and so does Joel. Fan Club!

Mod
Robert, I adopted a rescue litter and mom last spring, so there were seven kittens and I have plenty to spare! Come and get them! Or just come visit and join the melee, if you prefer. It's crazy around here.

Miriam, I had never had a marmalade cat before, but now I have four. I heard someone say they're more mischievous than other cats, and I believe it. They're into absolutely everything.

Ian, yours look so sweet! I had a Siamese-mix once and she was one of the most intelligent and loving (and bossy) cats I've ever known. Somehow being bossed by someone very small and furry is cute and not annoying. =)

Ceridwen, stick around and we'll make a cat person of you. =) UKL seems to be a cat person herself. I have another kids book by her called Cat Dreams.

Tatiana, my cat has no sense of humor and is the most obedient pet I've ever had. He was actually brought from the shelter by my boyfriend, who had previously been anti-marmalade as well.

Ian, given 9 years and three cats I'd have to posit that your wife either doesn't hate cats that much or really loves you :)

Mod
They each have their own unique personality, it's true! My marmalade cats range from Joshu who is known as Stinker, Fat Boy, Happy Cat, Rascal, and who is sweet and cuddly and always happy and purrful to Ghost who is intrepid as you see above, but still nurses his mom and all his sibs too when they let him, to Sun who purrs louder than any of the others, to Hadjii Jacob who's a bit shy and wary and extremely playful, dashing all over the house. They all seem to be extra curious, though, and able to climb almost anywhere, and willing to toss things to the floor with utter abandon. I don't remember my last litter being quite so .... thoroughly destructive, but of course they're all so charming and cute while they dismantle my house and furniture and empty all the shelves that I just laugh and can't get mad about it (most of the time). =)

I'm looking forward to all of them settling down to a nice comfortable middle age, though, whenever that happens.

My son got a B&N gift card for his birthday over the weekend and we went on B&N.com so he could pick out some books. He thought Catwings sounded, in his words, "awwww-suuummm!" so he decided to spend part of his money on the Catwings boxed set! He's so excited to read them!

Mod
Diana, your winged vampire cat is adorable! I want one!

Ian, hopefully Catwings will be the UKL gateway-drug that gets your son addicted, heehee. 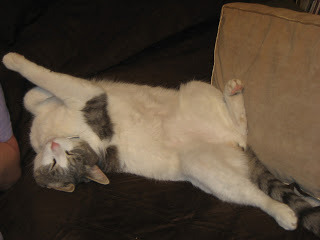 JET POSES NO RISK OF FLIGHT

Mod
That is adorable! Going to check out your reviews now.