First one:
I belong to a village / community where people live with talking animals. In fact, the animals are held in higher esteem than the humans. There are two bears... one bear is clearly much older, and has a crooked back. The other, healthier bear scorns the older bear for allowing humans to ride on it's back, like "It's bad enough that you're crippled (his word, because he's an asshole bear), but to carry that human filth on your back is reprehensible."

Anyhow. The reason the kind old bear is carrying the humans on his back is because there's an invasion happening, and everyone is trying to escape the village. Who is invading? Dinosaurs -- from outer space. The foot soldier dinos look like skinny raptors, and they carry long polearms. But the worst part is the MASSIVE T-REX that is towering over everything. And when I say "towering," I mean he's at least as big as the monster from Cloverfield. Except he's a T-Rex.

I should also mention that the village is in the sports field of my middle school.

I'm in a bus. I'm listening in on a conversation a man is having with another woman. He's telling the her about a new woman that he's dating, saying very nice things about her, and about how his kids love her (he's older, maybe late 50s). The thing is, the woman he's dating is sitting across the aisle, listening to him describe her. He knows she's there... he's trying to make her happy by having her overhear all the nice things.

SUDDENLY!! The bus veers out of control, and everyone (except the man) are thrown out from the emergency exit doors at back of the bus (like a schoolbus would have, though this is a city bus). The bus is sentient!! It wants to kill everyone.

At this point, I'm now an actual rider on the bus too, and not just an onlooker in the dream anymore. The bus is going all over the place, and I manage to jump out and run down an alley. I know the bus can't fit in the alley. It slams into the alley, and then the whole front of the bus turns... and it's looking at me. I push myself up against the wall, and I know that in a second it can smash into me and kill me. But it doesn't! I wake up.

What the hell?! I swear I'm not on medication.

Maybe you should be on medication? ;)

These definitely are odd. I say you have some good fodder if you want to do NaNoWriMo this year... :D

Mod
terpkristin wrote: "Maybe you should be on medication? ;)

These definitely are odd. I say you have some good fodder if you want to do NaNoWriMo this year... :D"

I think the village concept is better than the bus one, huh?

Are you reading Neil Gaiman before bed, again?

The first part sounds like the panserbjorn from the Golden Compass. The first dream has the best promise as a fantasy action story. Stephen ColBEAR's Godless killing machines vs. the King Lizard and his evil hordes. That would be pretty rad.

The bus one is just plain creepy. It is a shame Stephen King (apparently) isn't writing horror anymore, because you could probably ghost write that idea for him and make a killing.

Mod
I really like the phrase "(his word, because he's an asshole bear)". :)

Yes, they both are good fodder for writing exercises. I actually like the bus a bit more since it has an everyday setting that's off-kilter and then slips into pure horror (maybe the bus is a relative of Christine!). But the first dream could be used for an action fantasy workout, like Colin said.

That's not weird. Weird is when you dream the world's been taken over by mutant Jello, and instead of bits of fruit inside they have body parts from people they've eaten.

I once dreamed I was trying to talk to Howard Stern. But he kept on talking and ignoring me. When I woke up, he was on the radio.

Mod
Sean wrote: "That's not weird. Weird is when you dream the world's been taken over by mutant Jello, and instead of bits of fruit inside they have body parts from people they've eaten."

But Sean, that's just an extrapolation of the Gelatinous Cube from D&D ;) 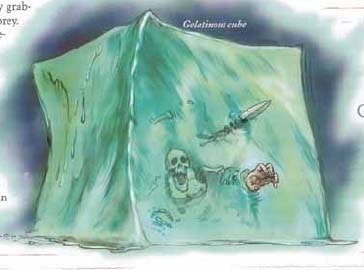 The first story I ever remember writing, around 8th grade or so, is based on a very emotional dream I had.

Of course, I often have really crazy dreams, sometimes prescient, and I wake up laughing a lot. (For instance, last night I woke up believing that the solution to the library eBook- publisher issue was simply to find the library's version of Garrison Keillor... I'll have to puzzle through that for a few days).

It's OK V. It's not weird. They can give you medication.

The approach to dreams that's worked the best for me is based on the assumption that everything in a dreams is a part of yourself. (Logical, since all dream components are in your head as plotted by your very own brain.)

I like the bears! Since they talk, you could probably just ask them what it's all about.

It's okay so long as you don't start dreaming of cyclopean cities where the geometry is all wrong.