someone get on that. stat. 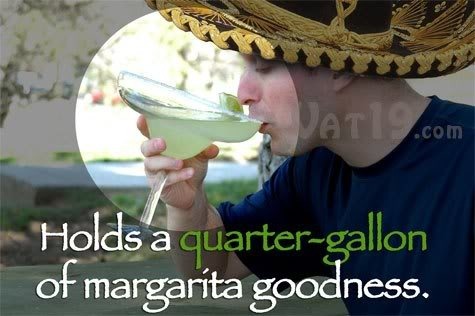 I was going to say, “Bottoms up,” until I remembered that’s the slogan for National Hook-Up Day.

reply | flag *
message 4: by [deleted user] (new)
Feb 22, 2011 02:21PM
The problem I see with msg 2 is that it would be warm before you finished drinking it. Apart from that I love margaritas. Can I vote for a Margarita day every day. I just need someone willing to make them for me.

This pisses me off no end, it's National Margarita Day, and I'm too damn busy to actually have one.

Ken wrote: "I was going to say, “Bottoms up,” until I remembered that’s the slogan for National Hook-Up Day."

This restaurant in Indiana just pulled their billboard because it was thought to be in bad taste taste. The billboard features a picture of a Margarita. The ad is certainly questionable, but I'm not sure it's really in bad taste.

I think it’s an amusing ad, but my guess is that it’s a little too quirky and idiosyncratic to serve its intended purpose of increasing sales. I don’t see the branding improvement there.

Maybe they intend to go the Geico route, hoping to heighten visibility by becoming synonymous with quirkily amusing ads.

OMG, I swear they stole that slogan from my mother's church!

BunWat wrote: "Oh dear. Yes I'm sorry it is in bad taste. I don't think its been long enough since the guayana tragedy for jokes about it to be in good taste. I dunno how long it would take, but definitely more..."

What do you think is in bad taste, the Kool Aid part, the 'to die for' part or just the whole thing?

I'm sorry, but I think it's hilarious.

Alecia wrote: "OMG, I swear they stole that slogan from my mother's church!"

Ha! I knew I'd seen it somewhere! I think it was on a local church sign (but without the "to die for" part).

Mod
Yes, it is in bad taste. Needed to be pulled.

I didn't know that Congresswoman Jackie Speier was a survivor of Jonestown. She made an appearance in the well of Congress a few days ago talking about the pregnancy she lost and how Planned Parenthood needs its funding maintained. (google the footage, it's worth watching.)

Speier served as a congressional staffer for Congressman Leo Ryan. Speier was part of the November 1978 fact-finding mission to investigate allegations of human rights abuses by the Reverend Jim Jones and his Peoples Temple followers, almost all of whom were American citizens who had moved to Jonestown with Jones in 1977 and 1978.[5] Speier was one of only two members of the mission who were concerned enough about potential violence to make out a will before traveling to Jonestown.[10] Several Peoples Temple members ambushed the investigative team and others boarding the plane to leave Jonestown on November 18. Five people died, including Congressman Ryan. While attempting to shield herself from rifle and shotgun fire behind small airplane wheels with the other members of the team, Speier was shot five times and waited 22 hours before help arrived.[11]