Name: Streak
age: pretty young
breed: what do you mean they are unicorns
appearance: all white except for silver horn and hooves
personality: easily frightened, but normally easy going
family: mother Lightning and twin brother Thunder
history: none
crush: none
other:

Name: Lightning
age: adult
breed: same
appearance: all white except for a red horn and hooves
personality: very motherly and kind
family: son and daughter
history:
crush: none
other:

Appearence: Shiny black with a golden star on his head and a golden horn. he has a silver mane and tail he has deep green eyes

Personality: He is a bold young horse that is extremely brave, he is very sweet but a fierce fighter and he is very mysterious

History: he was abandoned as a foal then he and Themalina met eachother and have been inseperable ever since(details below) they grew up together with no help he grew up in a deep forest that was untouched by humans and still is

Appearence: She is a caramal colour with a white tummy and star on her head, her horn is silver and her mane and tail are a deep chestnut brown, her eyes a kind and dark

Personality: she is extremely wise and intelligent, she is the sweetest thing you could ever come across, she offers advice to whoever needs it and is brave and kind

Family: she doesn't have any family, all she has is her adopted brother, Stormbreaker

History:just like Stormbraker she was abandoned as a foal she only remembers part of her life which is very unusual she loves Stormbreaker as her own brother and they taught taught eachother all they know

reply | flag *
message 8: by [deleted user] (new)
Feb 23, 2011 09:06AM
Name: Abaca ((a- ba-ca))
age: old
breed: unknown
appearance: tba
personality: since she is very old she is also wise. At first she is crany and mean but she does have a soft side. Loves younger kids
family: none all dead
history: none
crush: none
Other: oldest unciron alive

breed: Cupcakes (Thats what she wants it too be)

appearance: Evything black except a whit patch on her rump (lol) that looks like a fish

personality: loveable and loved by all

history: abused by every thing she met(Humans)

other: dosent have a horn yet becase young, ummm.... likes to follow everybody around, annoying

*makes weird noise with tongue that so irritates charlie and divya*

LOOB-LOOB-LOOB! (idk that's what it sounds like to me XDD)

and it fits right in with hall of the mountain king!!!

(picture --> http://1.bp.blogspot.com/_Xq67seqTzCA...
personality: Likes dashing around in hairy nuggets, and also likes playing with "my little pony" she sees herself as rainbow magic and says "NEIGH NEIGH PURRHHGHGJGGHGHG" and then ends up dribbling, so much that she fills her pool up.
family: Is related to Pixie Dust, sisterrrss.
history: ...Well, she spent all of her other years prancing about looking pretty. Everyone is jellous of her, because she's soooo prettyyyyfffuuuulll and they are also REAAALLLY jellous of her purple magical coconut that she keeps in her closet.
crush: naah.
Others: mane and tail are BEAAAAUUUTTIIIFFFUUULLLY long and pretty, she also likes pineapples and playing with "my little ponies"

personality:annoying, stupid and clingy
family: Rainbow magic as her sister :D
history: was abandoned by her mother, because she was too annoying, and kept on running into walls, so her mother kicked her in the head, and now she's even more brain damaged.
crush: the earthworm that lives under the magical lake of rainbows.
other: farts out rainbows and likes chewing on other unicorns legs. she also likes to pretend she's an earthworm, and eats grated cheese. brain damaged. like, heaps.

reply | flag *
message 37: by [deleted user] (new)
May 08, 2011 07:43PM
(sorry I forgot) crush: On the water bottle that has a double chin and has some daisy's as hair, she calls him "Brad" but his name is "Meeehhheesha Numboooroootoooplookshooksoooupohilikesoupandthatswhyhislastnameissolongcauseheisawaterbottle" But she forgets to say it some times. 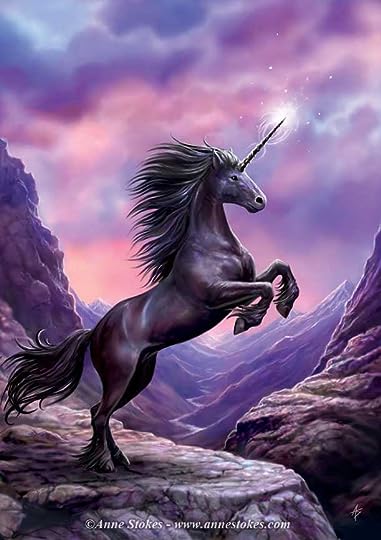 Her pelt has a tint of purple to it.
Her horn is purple.
personality: Going to be Rp'd

history: Family died in an accident. 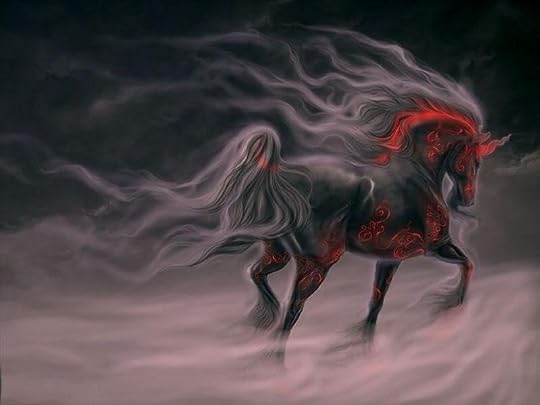 Personality: caring, kind, lonely
Family: Skyballion, her older brother.
Crush:
Mate:
Other: One of the rare blood-bay unicorns, also called Blood Unicorns because of a legend, based on truth, about how her great-great-great grandfather, a pure-white Arabian unicorn, had gone insane and murdered an entire human village, the blood of the humans he slaughtered soaking into his coat, main, and tail. The tale states that his deed was so evil that, to show the world his crimes, his coat was turned the color of the blood he had spilt, as were the coats of his descendents. She fears to go amongst others because she is afraid that they will have heard the legend. She and her brother Skyballion just recently found each other again after being apart for so long that she had given up hope that he had managed to survive.

Name: Skyballion
age: Young Stallion
breed: Arabian
appearance: http://landofunicorn.tumblr.com/photo...
personality: Caring, Protective, If there are Mares in his Herd that are in heat he Will mate them.
family:
history:
crush:
other: Same as Rhiannon, In a Herd there If there are Mares in heat Stallions Will Mate with them, It doesn't matter if they're Mothers, Sisters, or Daughters, Stallions don't think like humans do, They see a Mare and Breed. 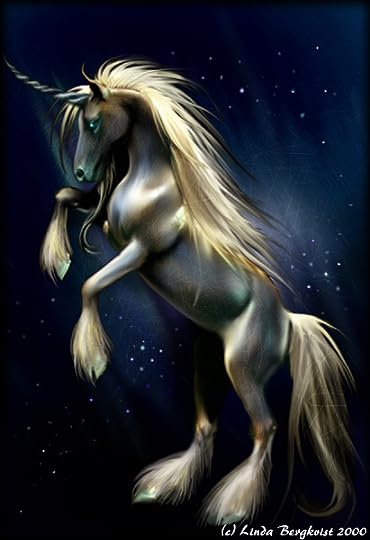 family: None that she knows of. They were all captured and killed by men in fancy suits of armor, they wanted to keep them as a side-show attraction, but, the creatures were banned by the leader of the group, and they were executed.

history: She has lost her memory of her foal-hood, all she remembers is being alone.

other: She is know as the ghost star(Note: her pelt color)herds see her one day, then she dissappears the next time they look. She has roamed the lands, feeling useless, and lonely, determined to find an accepting herd, she roams into this land, hoping to find one.

(I had always called my horse ghost star because, my g-ma had a huge pasture, and she would always disappear lol) 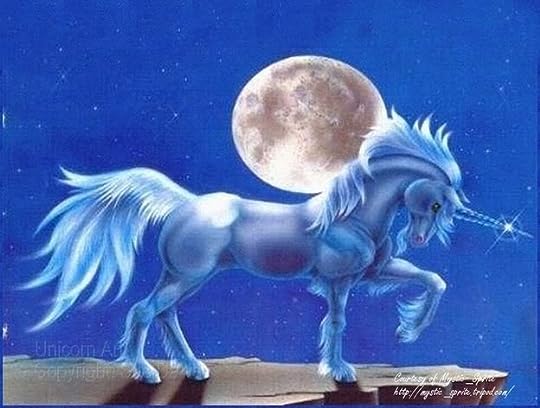 personality: caring, gentle, kind
family: unknown.
history: Abandoned by a stream as a foal, she is the only known blue unicorn. She wanders from place to place, searching for what happened to her family.
crush:
other: She has a powerful healing gift.

appearance: She has a silver horn(Not shown) 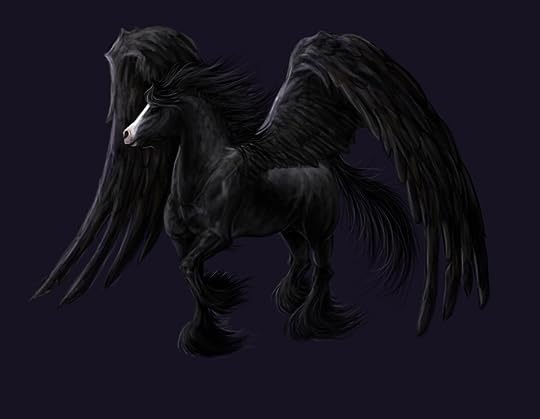 personality: She's very Respectful to those who respect her, she's nice to young foals, Strong minded, and easily angered.

family: None that she knows of.

history: Her mother was murdered by a Silver Unicorn, her father was captured by a woman that wanted to keep Unicorns. She escaped, and now roams alone.

other: She is the last full bred shadow unicorn. Has a gift of destroying something when she would like just by looking in its direction. These Unicorns are said to have been created by the greek god Hades. They are also known as, Shades. Her horn glows red when she is angry, blue when she is sad, purple when she is happy, and Silver when she is neutral.

Name: Zalkaine
age: Adult
breed: Arabian
appearance: All white with a black dorsal stripe that extends from the base of her mane to her tail, He horn is a Clear Crystal and her eyes are Ice Blue
personality: TBA
family: Zathura, Valkrain, Falcon, Eyrie
history: Joined Skyballion's herd
crush: Skyballion
other:


Name: Zathura
age: Adult
breed: Arabian
appearance: A light Blue with a snowy white mane and Tail, her eyes are a deep ocean blue as is her horn
personality: TBA
family: Same as Zalkaine
history:
crush: Skyballion
other:


Name: Eyrie
age: Adult
breed: Arabian
appearance: A Cool Silver with painted sky Blue splotches over her body, her mane an Tail are white while her eyes and horn are a Sky Blue
personality:
family: Same as Zalkaine
history:
crush: Skyballion
other: