Name: Anesha
age: 13
power: ((up to 2 powers)) she can make fire appear in her palms and stuff like that
personality: she has a double personality. One side of her is like a normal girl and the other is all rebilious and stuff. You never know how she is going to act
appearance: short black hair and an elfish face. She has Pink eyes and is really tall
History: most people do not like her because of her oddities
Family: none
crush/bf/gf: none
other:

Name: Khazi
Age: 15
Power: shapeshifting
Personality: humorous, friendly but likes being alone sometimes
Appearance: shoulder-length black hair with red highlights, green eyes, tall, lean
History: Her family cast her out as a baby because they were frightened by her powers, and she used those powers to survive.
Family: gone
Crush: Open

reply | flag *
message 5: by [deleted user] (new)
Feb 21, 2011 06:41PM
Name: Hunter
age: 16
powers: controlling minds and sending thoughts
personality: cold and calm. He then slowly warms up but it takes a long time, hardly ever talks and is able to blend in with the shadows
appearance: http://www.google.com/imgres?imgurl=h...
history: ran away when he was young
family: none
crush:
other:

History: Grew up on the streets, was playing with fire one day and burned the side of his face, it's scarred now.

reply | flag *
message 16: by [deleted user] (new)
Feb 23, 2011 02:16PM
Name: Rose
age: 16
power: ((up to 2 powers)) Controls Plants, You can tell her mood my the color of the tattoo on her wrist. (http://www.tattooblast.com/images/tn_...)
personality: Moody, Logical, Tricky, Caring, Motherly, Sweet
appearance: http://www.google.com/imgres?imgurl=h...
History: Disowned by family for being strange!
Family: None Anymore
crush/bf/gf: Open!
other: Loves Outdoors & Is Also Good With Animals & They Love Her!

can bella have a crush on him?

Name: Jazell(Jaz
age: 16
power: ((up to 2 powers)) Can control water and fire
personality: Usally nice, fierce in battle, stubborn, headstrong
appearance: http://3.bp.blogspot.com/_KZ5qdgu3avM...
History: Perfers not to say
Family: None
crush/bf/gf:open
other: She was born with the streaks in her hair, to lead people to belive she was born with fire powers 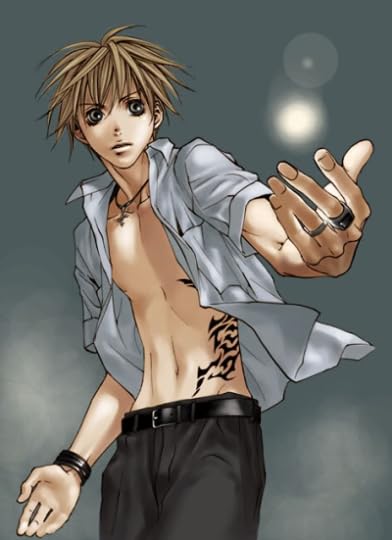 Name: Aria
age: 17
power: ((up to 2 powers)) Controls weather with her mood and fire
personality: Rped
appearance: here
History: Parents abandoned her when they figured out what she could to. She roamed the streets for a long time.
Family: She says they don't exist
crush/bf/gf: Looking!!!
other:

Zuko is NOT evil! He's grouchy! He can't help it because the others are hating on him! And he doesn't try to kill people when he gets the chance!

oh, leave it alone. it's not the real zuko.

Oh and Zuko is 17 not 16. And he didn't get the scar by playing with fire, his draconian father gave it to him in an Agni Kai when all he did was speak out of turn in a meeting! WHEN HE WAS 13! He was banished to capture the avatar, but his father thought it would be like a wild goose-chase and Zuko would die trying. KNOW YOUR AVATAR BEFORE YOU RP THE CHARACTER!!!

IT'S NOT THE REAL ZUKO OBVIOUSLY, DUMB BUTT! IF ABBY DOESN'T WANT HER CHARRIE TO BE EXACTLY LIKE THE REAL ZUKO, IT'S HER CHOICE! JEEZ, CHILL OUT!

Powers: Can control earth and metal.

History: Her parents are the richest people in the country. They make guards protect her at all times, since she's blind. But she manages to slip away and practice her powers in a cave with gigantic creatures called badgermoles. Since then, she would always participate in fights, and been titled champion. Her title is "The Blind Bandit" and can knock anyone of the ring that are twice her size. But her parents never knew about this, so she ran away. She hated the feeling of being treated as a weakling when she was exactly the opposite.

Personality: Tough, rebellious, can be hard-headed at times. Sarcastic and likes to makes jokes sometimes. Loves to fight.

Family: She ran away from them...

Name: Max ((her full name isn't Maximum... Sadly))
Age: 15
Power: Reading & controlling minds, can also fly
Personality: tough, brave, sarcastic, not the nicest person in the world, but still cares for friends- they're her only family
Appearance: medium-length light brown hair, dark eyes, tall and slim.
History: TBA
Family: All dead, besides her twin brother Matt
Crush/bf/gf: none
Other: She always carries around her trusted dagger, which is hidden beneath her clothing. Her wings are a light brownish color.

Donatello (Jerry) wrote: "IT'S NOT THE REAL ZUKO OBVIOUSLY, DUMB BUTT! IF ABBY DOESN'T WANT HER CHARRIE TO BE EXACTLY LIKE THE REAL ZUKO, IT'S HER CHOICE! JEEZ, CHILL OUT!"

Sorry about that... That was my avatar fan-dom speaking out.. :)

((*sigh* my creativity is running empty so I'll just go with this...))

Name: Fang ((I don't want to rp avatar charries here, that's what my group is about..))
Age: 15
Gender: Male
Power: Has two gigantic black wings, can control darkness.
Personality: Quiet, mysterious, sarcastic, doesn't trust others so easily, only those that are in his flock of friends.
Appearance: Tall, slim, medium black hair, dark eyes, wears mostly black.
History: His mother and father were too young when Fang's mother gave birth to him. He was taken away when he was a newborn, but the people that took him away assured his parents he would have a better and more successful life in their hands. The parents trusted them, and they took him away...the scientists. They experimented on him and gave him wings. He was raised by the scientists and along with a group of kids who also had wings. the rest tba...
Family: None, they gave him away.
Crush/bf/gf: None
Other: Keeps a few shurikens with him.

Are you for real? You made Fang? Now we have a Fang AND a Max