The Extra Cool Group! (of people Michael is experimenting on) discussion

Mod
So, I'm doing research in Second Life right now, and let me tell you things are bizarre over there. Everybody's young and hot and half-dressed and white....it's like Eugenicsville mixed with Baywatch. But, the most fascinating phenomenon I've noticed...or one of them, anyway....is this: NO BLACK GUYS. None. You can't buy black guy skin unless you try really hard to find it. I wanted to be a black dude--feel free to psychoanalyze me--and I COULDN'T, and I was PISSED, so instead I became a big robot dragon, and this is what I look like dancing at my favorite punk club: 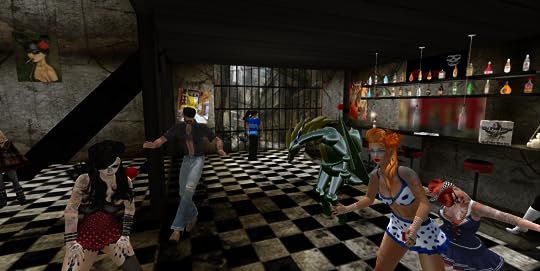 Anyway, the Big Question I'm getting to is this: Why is it that, in an environment where race HAS ABSOLUTELY NO SOCIAL REPERCUSSIONS, does everyone decide to be white?

Very interesting . . . and I love the robot dragon. It seems like this could be seen as a really great example of the way that whiteness is seen as unmarked where blackness (or other ethnic-ness) is not. If people want race to NOT be an issue, white is the way to go. But are there black women? Or men of other races/ethnicities? Is it just black men that are missing?

That is a truly bizarre situation, given that (if I understand it correctly) the spirit of the thing is purported to be that the choices of avatars available to participants is unlimited. Can you ask the people who run Second Life why it is that way?

In most online game/non-games, this is a common problem since the darker the skin, the less positive the experience of the environment tends to be. Isn't really so much a Second Life issue, it is more of an online issue. Don't like it, don't understand it but it is there. Like you, my assumption going in was that gamers wouldn't care but that's not what I found.

Oddly enough, if you don't choose an avatar that looks 'real-life', then the assumption of the other individual is usually that you are the same gender/race/culture/age as they are. That initial assumption doesn't tend to change until you do something to cause them to rethink it.

I wonder whether that's another aspect of the way many people project their own patterns of thought and behavior onto others, e.g. a person who is often dishonest expecting others to lie to him/her, try to cheat him/her, be unfaithful, have a hidden agenda, etc.?

Mod
But are there black women? Or men of other races/ethnicities? Is it just black men that are missing?

Well, there's a noticeable lack of most ethnic groups, although I've seen some Asian women. I remember seeing one black woman, and haven't seen anyone who specifically looked like they were part of any other ethnic group...other than vampire, werewolf, or furry. So, it's not just black men that are missing...like you mention, the players and makers of Second Life may see white as a "standard."

@Velvetink, I think there are definitely fewer black programmers than white. But, I know of a couple people on there who are black but have white avatars. (I don't know them personally, just know OF them.) So, while I think you're right, it also seems that at least most of the black designers are choosing to be white.

...since the darker the skin, the less positive the experience of the environment tends to be.

That's something I hadn't thought about! Studies have shown that in World of Warcraft players tend to be nicer and more helpful to female avatars...I wonder how noticeable prejudices are in online environments?

Michael wrote: "But, I know of a couple people on there who are black but have white avatars. (I don't know them personally, just know OF them.) So, while I think you're right, it also seems that at least most of the black designers are choosing to be white."

So they are opting out of being prejudiced against by choosing to be white..they must see online games/Second Life as a time out from all that crap. And personally who wouldn't. I go online to escape real life stuff myself.

I can totally understand wanting to avoid racist comments/actions by choosing to be a "safe" color. I myself am a PoC (african-american/tahitan) & I've noticed some people on other websites are surprised when they find out I'm not lily white. Even on here, some people are like "Your black?!? I didn't know black people read!?!" which is why I use the above avatar. You know it's not me but you don't know what ethnicity I am unless I trust you enough to allow you to be my "official" friend, therefore allowing you to see my real pics.

Unfortunately, a lot of people are judgmental & racist. They feel the need to make their hate known, more so online. It's like you grow a pair of balls & forget there are actual living, breathing people behind the screen name you're insulting.

The Extra Cool Group! (of people Michael is...