I have visited the newly opened Segantini Exhibition at the Fondation Beyeler in Basel yesterday.

I have encountered his art for the first time some years ago on a vacation in Grisons, Switzerland, and I've come to love deeply. His pictures have a nurturing, calming effect on me. It seemed as if the (his) mountains became clearer and clearer as he aged, becoming more pronounced, apparent and simply 'there'.

I do not know how to post pictures, yet I've provided a link:

Here's a little excerpt from the webpage of the Fondation Beyeler. Enjoy!

The reputation of Giovanni Segantini (1858-99) rests on his depictions of the mountains and the lives of farmers who eked out an existence there. With Divisionism, he found a modern form of visual expression that made the Alps appear in a new, brilliant light and range of color. His oeuvre awakens a desire to experience unsullied nature. Our exhibition celebrates Segantini as a pioneer of modern painting, which he rejuvenated in parallel with Monet, van Gogh, Gauguin, Cézanne, and Klimt. It encompasses about seventy oils and drawings from all phases of the artist’s career. Born into impoverished conditions in Tirol, Segantini lost his parents at an early age, then subsequently trained in Milan. The exhibition traces his artistic development, which began with scenes from urban life and continued with depictions of the northern Italian lake district of Brianza, including the renowned Ave Maria a trasbordo. Together with Bice Bugatti and their four children, the stateless Segantini moved to Savognin, where he immersed himself in peasant culture and executed his first large-scale paintings of the Swiss Alps. Finally he settled with his family in Maloja, a village in Engadin, and spent the harsh winters in Bergell. His gigantic paintings were done outdoors, at higher and higher altitudes, culminating in the legendary Alpine Triptych, which was prepared in large-format studies. The progressive sublimation of his imagery led Segantini into a realm that lent the Alpine world the character of an earthly paradise. His last words were “voglio vedere le mie montagne” (I want to see my mountains).

I really like him, Natalie! His talking about and portraying the mountains kind of in a round about way, answers my question in the thread 'Questions from the Met' when we talked about the role 'white' plays in art. I used the analogy of snowy mountains to describe my mood. I showed Ansel Adams, but as far as painting, I would definitely choose Segantini. 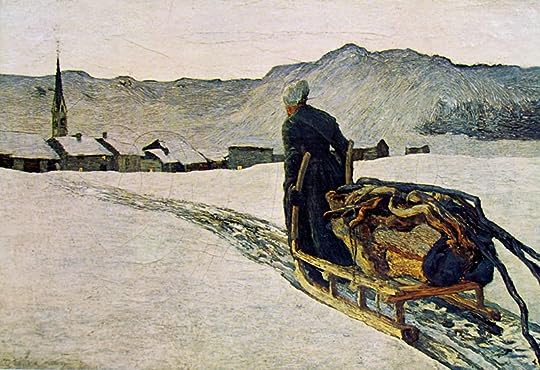 Also, his paintings of the peasants kind of reminds me of van Gogh.