Mod
You can create characters from the game, if you would like. First come first serve.
*If you do create a character from the game and you are absent from the rp for a lengthy period of time, I will delete your character so someone else can play them.*

Name: Joelle Poe
Gender: Female
Race: Hylian...then Poe
Backstory: Lives in Castle Town ... later in the Forest Temple. But for at least most of the roleplay I think I'm going to have her stay human. (I wrote a whole short story fan fiction on her backstory and those of her sisters)
Appearance: Loves wearing red and has long red hair.
Personality: Has a fiery temper, picks on Beth a lot.
Family: Amy, Beth, Meg, Father.
Position: Father owns a shop so wealthier than most.
Other: They are in the game's Ocarina of Time and Majora's Mask.

Other: Triforce of wisdom

Here is a picture of my character as a Poe.

Name: Amy Poe
Gender: Female
Race: Hylian...then Poe
Backstory: Lives in Castle Town ... later in the Forest Temple.
Appearance: Loves wearing green and has short towhead colored hair.
Personality: Is jealous of what everyone else says, does, and has.
Family: Joelle, Beth, Meg, Father.
Position: Father owns a shop so wealthier than most.
Other: They are in the game's Ocarina of Time and Majora's Mask.

Name: Meg Poe
Gender: Female
Race: Hylian...then Poe
Backstory: Lives in Castle Town ... later in the Forest Temple.
Appearance: Loves wearing purple and has long brown hair with golden in it when it catches the sunlight.
Personality: Is horribly vain.
Family: Joelle, Beth, Amy, Father.
Position: Father owns a shop so wealthier than most.
Other: They are in the game's Ocarina of Time and Majora's Mask.

Name: Beth Poe
Gender: Female
Race: Hylian...then Poe
Backstory: Lives in Castle Town ... later in the Forest Temple.
Appearance: Loves wearing blue and has short midnight black hair that is in a plain style.
Personality: Is nearly constantly depressed or sad.
Family: Joelle, Meg, Amy, Father.
Position: Father owns a shop so wealthier than most.
Other: They are in the game's Ocarina of Time and Majora's Mask. 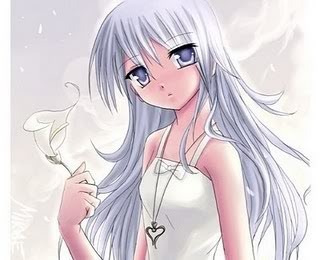 ((ooooh. I know nobody;s supposed to play Link, but I'm going to take Ganondorf. hehe. This is going to be great.))

Mod
Name: Saria
Gender: F
Race: Kokiri
Age: 17 (if young, 12)
Back Story:"Saria is a character from The Legend of Zelda: Ocarina of Time. She is a Kokiri girl, considered to be very pretty by her fellow Kokiri. She is regarded as a motherly figure to her people and is often the person that they turn to for advice. Because of her kind-hearted nature, she is very well-liked by the people of her village, especially Mido, who developed a deep fondness for her. She is also Link's best friend, an outsider among the Kokiri, resulting in a powerful bond which seems to elicit feelings of jealousy from Mido, causing him to shun Link the majority of the time. "
Appearance:

"Like the rest of her people, Saria physically appears to be no older than the age of thirteen and wears the typical green garb of the Kokiri. She has bright blue eyes, but her most famous trait may be her vibrant green hair, held in place by a dark green headband that she always seems to wear."
Personality: Kind-hearted, sweet.
Family/Friends/Crush: ((see back story))
Position/Occupation/class/etc: Sage
Game: OoT
Other:

Mod
oh, you should mention the triforce of courage. 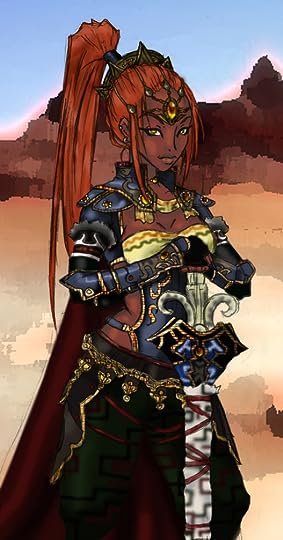 ((Source of pic is http://www.northcastle.co.uk/guild/ar..., just in case, don't want to get messed up with copyright, eep!))

Age: 17. Race: hylian. Origin: I'm planning on putting that in the roleplay

Dangit there goes my plans to be link