This topic is open for discussion of Hit List by Laurell K. Hamilton. Be prepared for SPOILERS. 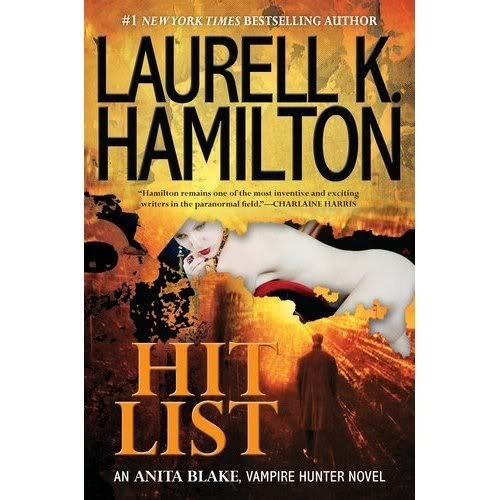 So since we've got some time till this book comes out feel free to speculate about what this book will be about. Let us know if you've heard anything and if you can predict anything from the cover. Decided to enlarge the picture in hopes it'd reveal some hint of what is inside. If anyone see the first chapter or chapters get posted anywhere let us know.

I read that the premise is that someone takes a hit out on Richard, Anita, and Jean-Claude. I guess that might be how Edward enters into it- either as the hitman or to help against the hitman.

I have no idea what the heck that cover is saying. Laurell K Hamilton's website has a Forum and it's a great place to post thoughts about all the books. I haven't been there in awhile, but I follow her on Facebook (she's also on Twitter) and she has submitted the manuscript.

As far as speculation, I'd say Anita and Co. are on a hit list and those of us who've read the entire series can probably guess who's behind it though it's not necessarily a given. Since the title says 'Hit List' and Edward is a bounty hunter I assumed he'd be in it and from reading forum posts I know he is (he and his very scary buddy). Yay!

Bullet left many things up in the air and I want to see some things tied up before introducing more for us to chew on.

While I haven't read it, the 1st chapter is up on her website.

TUESDAY!!!!!! although I'll get mine Monday night...yeah sometimes working in a bookstore is awesome.

Awesome Ingrid. I'm about to read Narcissus in Chains.

I'm about 1/3 of the way thru Incubus Dreams. I'll head to B&N Tues for Hit List. I have a gift card, so I'll get the new Sookie book, too.

I'll be getting Sookie too.

Picked it up, but it'll be a bit before I get to it.

Started reading Hit List and It may be the best one yet.

I finished this yesterday. It was the best one in years. Since, maybe Obsidian Butterfly. I really haven't like the ones since then- it's all sex. (view spoiler)[ this book only had 1 sex scene and it was only her and one other person. So, only minimal, non-group sex (hide spoiler)] Plus, tons of Edward! And very minimal whining about her (love) life. Maybe the author has gotten the message that people were starting to get to the point of not being able to read this series any more.

I really hope so, I liked all the books up to Danse Macabre and then it went downhill as well. I didn't mind all the sex, I just couldn't stand the main character whining about it! I like the Merry Gentry series a lot and it has a lot of sex. However, the main character enjoys it and it just seems that Anita doesn't. Also, Anita partner's were getting confusing, I was having a hard time following the who/what/when/where/how's of all of them. She needs a companion book or reference book or something...

Suzanne wrote: "I really hope so, I liked all the books up to Danse Macabre and then it went downhill as well. I didn't mind all the sex, I just couldn't stand the main character whining about it! I like the Mer..."

That's what I thought, too. I get tired of the whining. Hit List is book 20 and she's STILL whining! Come on! On another site someone posted a chart for Anita's sex life. I'll see if I can post it. lol