26 views
Random Queries > Were You Ever in Drama Club?

What role(s) did you play?

Never, but I know Cynthia was. Where has she gone?

I was in I never saw another butterfly. It's about kids in the Holocaust. I didn't have any speaking lines, just a backround kid.

I also worked sevral other plays behind the scenes. Never had any aspirations to be in the spotlight.

My elementary school in New York had an off-Broadway theater in the basement, so we did a lot with them. I wanted to be a theater geek in high school but I was too shy to get involved.

I was never in the Drama Club but when I was 14 I was in Lil Abner where I was featured in a non-speaking role as one of Lil Abner's cronies.

Michael wrote: "I was never in the Drama Club but when I was 14 I was in Lil Abner where I was featured in a non-speaking role as one of Lil Abner's cronies."

I love that movie!

It was a depressing play. We did it for a One Act competition and came in 3rd I believe.

Drama was a great time. Bunch of crazy people having a good time.

I played Ma in our middle school's melodrama. In high school I was in the chorus of two high school musicals, "Annie Get Your Gun" and "Of Thee I Sing." My high school theater director hated musicals and preferred to do things like "Medea" and "Dr. Faustus." Lots of really talented actors.

My oldest daughter has been in something like 30 shows. My favorites of her roles have been Beatrice in "Much Ado About Nothing" and Gwendoline in "The Importance of Being Earnest."

My drama career:
-The fisherman in "The Fisherman & His Wife" (Line: "Flounder, flounder in the sea/prithee harken unto me/Ilsabil my willful wife/does not want my way of life")
-A chicken in "A Folktale Quartet" (Line: "Squawk! Squawk!")
-Two of Joseph's brothers in a Hebrew translation of Joseph & the Amazing Technicolor Dreamcoat, which I can still recite in Hebrew in its entirety
-No lines, but I was a paid extra on a Global/Showtime series called "Ready Or Not." My main part was to walk out of the synagogue/hebrew school, separate two kids who were fighting, then turn around and realize that somebody had sprayed a swastika on the synagogue wall and thrown garbage at it. Then we sighed and resignedly picked up the garbage.
Fun fact! They used real garbage. It was gross.
Fun fact! The synagogue used for the filming was a major one on a major road in Toronto, so every time a bus passed, we saw everyone on board flipping out over the swastika, since they didn't know it was for TV.

i was in spoon river anthology in high school. what was i thinking? trying to score with some drama chicks to complete my "club trifeca" which included band chicks and cheerblock chicks

Kevin "El Liso Grande" wrote: "i was in spoon river anthology in high school. what was i thinking? trying to score with some drama chicks to complete my "club trifeca" which included band chicks and cheerblock chicks"

Cheerleaders and drama girls were too much work. An easier trifecta was all in band -- woodwind, percussion, brass.

I wasn't in a drama club. I sang in the College and Community Choir and we were asked to sing in "Brigadoon". I even had a solo line, "Ale for sale or barter there, at the square, laddie!"

It was right at the beginning of the play when the villagers enter the stage.

Did you have a role, or were you part of the chorus?

Mod
Just in the chorus. Still, we all had to have our sewn costumes from home...

There wasn't a Drama Club at school, so I was in community theater productions, from Oliver to The Electric Sunshine Man. I quit when some parents were laughing at the fat kid (me) trying to dance in that last one.

Sarah Pi wrote: "Fun fact! The synagogue used for the filming was a major one on a major road in Toronto, so every time a bus passed, we saw everyone on board flipping out over the swastika, since they didn't know it was for TV."

(Maybe) Fun fact! The synagogue I used to go to is where they filmed the movie A Serious Man.

Michael wrote: "(Maybe) Fun fact! The synagogue I used to go to is where they filmed the movie A Serious Man. ."

Was it the one the Coen brothers went to as well? That movie felt very autobiographical.

The graduating thespians during my senior year - 10 of us, all female. So I found out ten years later that because we were all female thespians, we were nicknamed "The Taylor High School Lespians" Whatever works. We won all kinds of awards at the State UIL One Act Play competition for our production of Bertolt Brecht's The Good Woman of Szechuan.

I didn't like being on stage for the most part. I preferred to run things backstage - usually I was in charge of props, wardrobe, makeup, stage techs...

Plays in which I participate in high school:

Here's a pic of us in the A Midsummer Night's Dream production (I'm the one kneeling with eyes shut): 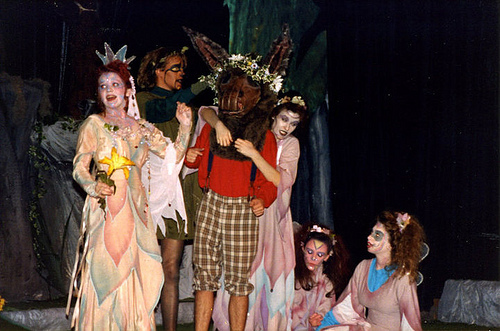 After high school, I took a LONG hiatus from theatre before I agreed to do it again. My dad tried to talk me into taking the full scholarship offer to the theatre department here in college, but I was so burnt out by then. I didn't go near a stage again for another 12 years.

Then I was in:

And after that, I worked as the Stage Director/Manager on:

Also, I was a pretend rape victim when the news station where I worked did a sweeps piece on GHB, the date rape drug. OH! And I was also an amusement park roller coaster patron in a commercial once. I was producing the commercial and got suckered into riding it. The director was yelling at us "MORE FUN! MORE SCREAMS! MORE FUN!!!"

My brother was in one, can't remember the name, but it had Nazis in it. They were at a neighboring town and had gone outside for air in their uniforms. They cops were called because the Nazis had come to town. Heeheehee

Sarah Pi wrote: "Was it the one the Coen brothers went to as well? That movie felt very autobiographical."

My guess would be no, but I don't know that for certain. The synagogue in the movie was the only one in the suburb of St. Louis Park during the time the movie took place, but there were still a number of active synagogues left in Minneapolis at that time that had large memberships. I agree that the movie felt autobiographical, and based on some of the character's names was, but I don't share many of their perceptions of that time.

I had the role of the corpse in GRAND THEFT PARSONS. During casting, the director called me and said he had seen my work, and that I was a natural for the part.

I heard you killed in that part, Ken.

Larry wrote: "I heard you killed in that part, Ken."