I filled out a character profile for him, and I need some help filling in the blanks.

But first, his story: He was driving his five year old nephew home from preschool for his sister (that he lives with), listening to his iPod too loudly. He was merging lanes and there was a car in his blind spot and he couldn't hear the horn honking. His nephew died on impact. He has to go through court and all that wonderful fun stuff. Alice is his lawyer, and Hayden is his therapist.

The things with *'s need help. 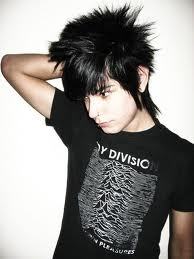 Clothing style: Skinny jeans, Converse, band t-shirts, shiny belts, basically a "stereo kid" (which is a scene kid that's more serious about the music) that leans a little (okay, maybe a lot) toward "emo", usually dark clolors, black zip-up hoodie
*Defining gestures/movements:
Things about his appearance he would like to change: His pointy ears, since people tease him and call them elf ears
Speaking style: Generally bored tone, sarcastic, ticked off, but when he talks about music he gets really passionate and talks super fast
Pet peeves: People who like bands he likes right after they get somewhat popular or played on the radio, people trying to help him
*Fondest memory:
*Hobbies/interests:
Special skills: Can play piano by ear really well
Mental issues: Trust issues, accepting help issues, horrible guilt
*Quirks:
Temperament: Introverted, apathetic, wary but when he opens up he's fairly charming
Negative traits: His temperament, he gets judged pretty easily because of how he dresses, he refuses to accept help
Things that upset him: When he sees a little kid playing or doing anything really, people who don't care about music, crowds sometimes
*Things that embarrass him:
This character is highly opinionated about: Music
Things that make him happy: Music
Family: Lives with his 24 year old sister who works as a barista while taking part time college classes (who's son he killed), his dad is in jail under illegal weapons charges, can't stand his mom which is why he moved out, would've had a little sister but his mom got an abortion
*Deepest darkest secret:
Favorite bands/songs: A Day to Remember, Ridge, Flyleaf
*Favorite movies:
Favorite TV shows: Band in a Bubble, secretly loves American Idol
*Favorite books:
Favorite food: Jello and Wheat Thins, fajitas
Political views: Pro Life, supports homosexuals, thinks the government should generally stay out of everybody's business, hates the court system
Religion: Believes there is a God, prays sometimes, doesn't go to church

Also, I'm sort of afraid he's too stereotypical, so if there's anything that could fix that, that would be good. Thanks!

He really seems like a Flyleaf kind of guy. He'd also probably like A Day To Remember.

Ooh, he does. Yeah! Thanks. And *facepalm* RIDGE! Duh.

Hmmm....he'd also probably like MCR and Green Day and all them...

I can totally see Green Day.

Lav[and i'm thinking i'd prefer not to be rescued] wrote: "Ooh, he does. Yeah! Thanks. And *facepalm* RIDGE! Duh."

He also loves Panic! At the Disco.

Lav[and i'm thinking i'd prefer not to be rescued] wrote: "Mmmhmm, me too!

He also loves Panic! At the Disco."

THANK YOU!
I will try to think of more stereo bands.
Heck, I'll ask Dalton.

I WILL.
If I'm not scared half to death.

For me? *makes an adorable face*

Lav[and i'm thinking i'd prefer not to be rescued] wrote: "Don't be scared! You can do it. I mean, the worse he can do is... yeah. Don't think about that. Just do it. XD

For me? *makes an adorable face*"

That sentence just made my day. *hugs*

Oh, one thing. The third book isn't part of the same series as the first two, right?

I was thinking probably not, since it isn't Sci-Fi. It's more Crime/Drama/Music-ish... I don't know. But yeah, not really. Just the same people and background and everything.

Lav[and i'm thinking i'd prefer not to be rescued] wrote: "*hugs back*

I was thinking probably not, since it isn't Sci-Fi. It's more Crime/Drama/Music-ish... I don't know. But yeah, not really. Just the same people and background and e..."

Yeah. And today I was telling Abby about it, and one of her pet peeves is when the third book has nothing to do with the first two. So yeah. She's right.

Plus, since the third one is pretty different and everything, it might attract a different audience or whatever, so it'd be good not to have them too closely connected, you know?

BUT. Mega uber Lav&Emmie fans are obviously going to have them all. :)

Lav[and i'm thinking i'd prefer not to be rescued] wrote: "BUT. Mega uber Lav&Emmie fans are obviously going to have them all. :)"

Obviously!
Chance will definitely have them all.

Jewel and Maddy better have them all. Just because Jewel's the one at school who pretends to care so she knows everything and every once in a while comes up with brilliant ideas and Maddy threatens me.

xD
Yeah.
Andrew....actually, this all might be too girly for Andrew. I need that kid and Abby to help me get my mind back on the technical aspect of it. BUT. He gave me a hug today! :D

Bahahaha. It might be, it might be. But still. Yeah, the technical aspect. That's always good. The Sci/Fi part. That's... important. Really important, actually.

We're only on Chapter 2! Pssh! Have a little in faith in our... okay yeah... we need Andrew and Abby. Definitely.

Yep. Wait, is the assembly chapter two or chapter three? Because then we really need to focus on the sci-fi.

I believe the assembly is chapter three. Because I have chapter two all planned out from my end. (And my part is basically written.) And it doesn't involve the assembly.

OH. I need to explain about the iPod, sort of.

You already have it all! It's: Mariella lunch class, flashbacks, finds iPod with random note in her locker, then Mariella/Nick/Hayden is cute scene, then Hayden is a giant conceited jerk after he finds out Alice thinks Hayden is cute.

Then I have to write the iPod thing, and the Noel thing and then whatever happens to Hayden in that chapter and then it's done.

The iPod thing is: Someone took her iPod and replaced all the music with a bunch of mainstream junk and did some sort of hack on it so you can't update the music. She pretty much dies.

Dude. While they're on the run, Hayden is totally fixing that.

I know right? THEY'RE SO EVIL.

You could incorporate his passion for music into his favourite books & literature.

For instance, books; Struts & Frets by John Skovron is an interesting one.

Also, he could have favourite films that are about or have elements of music, perhaps: RocknRolla, Yami no Kanibaru, The Boat That Rocked, The Future is Unwritten, I'm Not There, etc. :c)

T e s n i wrote: "You could incorporate his passion for music into his favourite books & literature.

For instance, books; Struts & Frets by John Skovron is an interesting one.

Also, he could have favourite fi..."

The Boat That Rocked is particularly win.

Thanks Tez! I'll check those out and see if he likes them.

Something I found out about Elliot.

It's where you choke yourself until you pass out, and then you get a short high when you're conscious again.

It's generally not to kill yourself, but tons of kids have died from it.

Which would make it accidentally suicidal, but suicidal all the same.