17 views
The Hay Wain- John Constable- perfection to me!

Ifirst saw this in The National Gallery in London- and it continues to AMAZE me!! A perect paint in every way!

It is indeed a lovely painting, and justly famous.

Looks like something out of a Thomas Grey poem.

I love that painting! I think I remember seeing it at the National Gallery, too. It is amazing, the technique as well as the emotion, talent, and beauty. Thank you for posting it, Rick!

Heather wrote: "I love that painting! I think I remember seeing it at the National Gallery, too. It is amazing, the technique as well as the emotion, talent, and beauty. Thank you for posting it, Rick!"

my pleasure!! I love the British Landscapers- Constable is tops for me- followed by Turner

Head in the Clouds
Why was the painter John Constable so obsessed with clouds?

During the summers of 1821 and 1822, while living at Hampstead, the English painter John Constable set up his easel at various elevated locales on the Heath and painted oil sketches of clouds, as many as 50 during the summer of 1822 alone, with notations on the back concerning such atmospheric conditions as the time of day and the direction and speed of the wind. At first, these studies included treetops or bits of buildings, as though to tether the sky to the earth below. Soon, however, all ties were cut. Constable painted the first of his pure cloud studies on Sept.13, 1821, with the notation: "One o'clock. Slight wind at North West, which became tempestuous in the afternoon, with rain all the night following." Constable was understandably proud of his achievement in these paintings. "You can never be nubilous," he told his friend Archdeacon John Fisher in 1823. "I am the man of clouds."

On recent trips to New Haven and New York, I've taken to stopping at the Yale Center for British Art to spend some time with the stunning constellation of Constable's cloud studies on view, along with the other incomparable works by the artist in the collection, including two versions of one of his last great paintings, a view of the ruins of Hadleigh Castle, as well as a much earlier cloud study of the same subject. Looking repeatedly at the cloud studies, I've felt a lingering dissatisfaction with what I've read about them, and I've found myself wondering whether there might be a fresh way to understand them.

It has never been entirely clear what inspired these marvelous and enigmatic cloud studies, much prized by collectors (such as Paul Mellon, who bequeathed 14 of them to Yale), or what purpose they might have served in Constable's larger career. Around the same time that he indulged in what he called his "skying," he was also undertaking the major landscape compositions, such as The Hay Wain and Stratford Mill, which he painted in duplicate (first a freely painted full-size oil sketch and then a more finished version) and called his "six-footers."

The six-footers, with their bustling activity around canal locks, their lazy fishermen, and their horses towed on barges, are as full of incident—of "world," one is tempted to say—as Bruegel's peasant scenes. The cloud studies, by contrast, can seem, in their brushy airiness, like pictures of almost nothing, in which a streak of white or a scrape of the palette knife can change the mood completely. One can point to general connections—a lighter ground, for example—between the cloud studies and the big paintings that followed. But Constable never transferred clouds directly from his studies to his landscape paintings. In the absence of a clearly stated purpose for the cloud studies, scholars have explored some possible motivations for these extraordinary works. It has been noted, for example, that Luke Howard, a Quaker chemist from London, announced his Latinate classification for clouds—cumulus, stratus, and cirrus (the latter from the Latin for a curl of hair)—in his "Essay on the Modification of Clouds" of 1803. Howard introduced some scientific order into what had often seemed the sheer chaos of the heavens, banishing such poetically suggestive names as "mare's tails" and "fleeces."

Goethe, an amateur scientist in the matter of colors and plants, was much impressed with Howard's work and published, in German translation, an autobiographical letter that Howard sent to him at his request. He also published a poem of his own inspired by Howard's work, and tried to hire Caspar David Friedrich, the German lyrical painter of loneliness and moonlight, to paint some studies of clouds, "for scientific use," in accord with Howard's classification. Friedrich refused, foreseeing "the immediate downfall of landscape painting in this system," and fearing "that in future the light, free clouds would be forced slavishly into this classification." 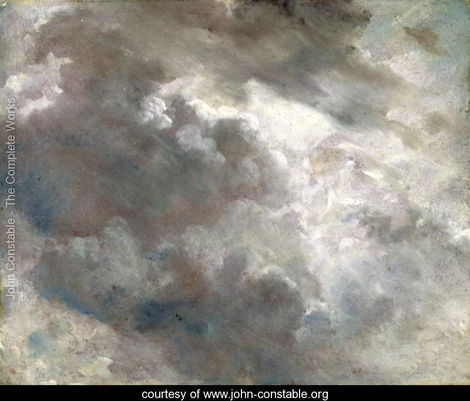 Was Constable, in this regard, a more "scientific" painter than Friedrich? This is the view of Ernst Gombrich, in his chapter on "The Image in the Clouds" in Art and Illusion (1960). "There are no more truthful images of clouds than those painted by Constable," Gombrich maintains. But there is no evidence that Constable was aware of Howard's scheme for classifying clouds, unless a scrawled word on the back of one of his canvasses really is, as some scholars have hopefully claimed, the word "cirrus."

Among Constable's contemporaries, the English Romantic poets also had a great deal to say about clouds. Wordsworth famously "wandered lonely as a cloud." In Shelley's "Mutability," clouds, as often in Romantic poetry, are an emblem of evanescence and change; in the second section of his "Ode to the West Wind," when Shelley turns from wind-driven leaves to clouds, they become symbols of our own fleeting selves. For Coleridge, clouds were emblems of freedom, as in his ode to France—"Ye Clouds! that far above me float and pause,/ Whose pathless march no mortal may control!"—or of poetic consciousness, as in "Dejection."

It is tempting to conclude that Constable's cloud studies somehow combine scientific observation with poetic inspiration. But Constable was neither a scientist nor a poet; he was a painter. Is there a way to look at the cloud studies as primarily works of art?

Landscape with a Double Rainbow

Wow guys, you're all jammin!
Rick you should get up to New Haven and check out the Yale Center of British Art. http://ycba.yale.edu/index.asp
Carol turned me on to it last summer.

Great place with amazing art -- worth a trip.

Carol wrote: "Great place with amazing art -- worth a trip."

Monica wrote: "Wow guys, you're all jammin!
Rick you should get up to New Haven and check out the Yale Center of British Art. http://ycba.yale.edu/index.asp
Carol turned me on to it last summer."

Thanks! never heard of it! will do so for sureon my next trip back East!!

Heather wrote: "Head in the Clouds
Why was the painter John Constable so obsessed with clouds?

Thanks Heather for posting that!! All those painting take my breath away!!