What are some of your faves? Some that should have never been made? What do you really think about the Romeo + Juliet starring Leo DiCaprio and Clare Danes?

I'm watching a 2007 adaptation of Macbeth starring Patrick Stewart, and it is seriously fucking my shit up right now.

I hated his Much Ado About Nothing though. That one was just silly.

But I seriously loathed Romeo + Juliet. The only Baz Luhrmann film I liked was Strictly Ballroom.

Two of the best Shakespeare adaptations are both directed by Akira Kurosawa: 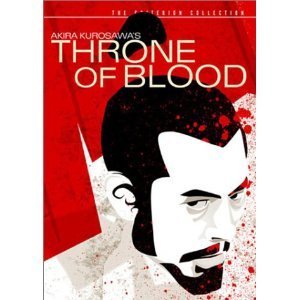 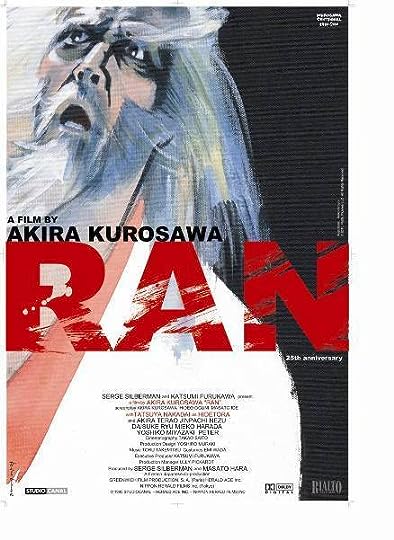 I highly recommend both versions, as they're true to the Shakespearean context, yet are original interpretations of both classic texts.

Why is Othello Black?

Ran - one of my very favorites. Haven't seen Throne of Blood yet.

Shakespeare can be tough in movies, since he wrote for a live audience. Also actors don't get the language, and fou fou it up. He's got no subtext, it's all out there.

I love Kevin Kline as Bottom!

Altho I saw him in a filmed version as Jacques in As You Like It, and he didn't get it. He got the morose, he got the language, but he was dull.

I love the Branagh Henry V and Much Ado About Nothing, except for Keanu Reeves. I love the Zefferelli Romeo & Juliet. I've seen more live shakespeare than movie versions.

Add me to the Branagh groupies, although I haven't seen the one he tried to turn into a musical. I'm not a fan of any of the film adapatations of Romeo and Juliet.

Britt, Othello is black because he is a Moor. Moors were Arabs and North Africans who settled in Spain and Portugal. Othello is also brilliantly played by Lawrence Fishburne in another of Branagh's screen adaptations.

I saw that version last night! I fell asleep before everyone died though.

Jammies wrote: "Add me to the Branagh groupies, although I haven't seen the one he tried to turn into a musical. I'm not a fan of any of the film adapatations of Romeo and Juliet."

*gasps* Not even the Zeffereli one?

SP, I am totally with you. I love Much Ado, in fact it is one of my favorite movies...but the Keanu is PAINFUL! What was he thinking? Mostly it's easy to ignore, until the monologue...ugh. I have to FF at that point every time.

(Do love Strictly Ballroom, own that too.)

Speaking of... I think I liked Prospero's Books, but I don't remember it very well. And has anyone seen Julie Taymor's new Tempest?

Sarah Pi wrote: "Speaking of... I think I liked Prospero's Books, but I don't remember it very well. And has anyone seen Julie Taymor's new Tempest?"

No, but I WANT to! Doesn't Tilda Swinton play Prospero?

And Russell Brand is in it. I had hoped he would play Caliban, but that's Djimon Hounsou. 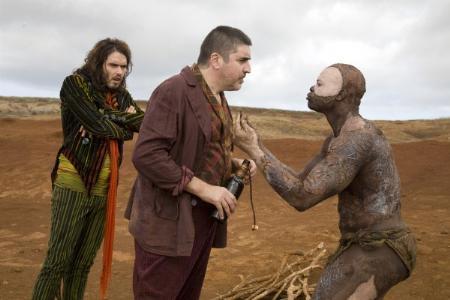 I saw it last week and really enjoyed it. Some people are arguing with the interpretation - Prospero in the play is more resigned, here Prospera is more vengeful, I guess you could say. True, but still I thought it was great. I like adventurous Shakespeare. There are a lot of digital effects, which I'm not a fan of, but they fit in well here.

I don't mind the Bazz Romeo and Juliet. I thought it was a good modernization. But I love the Zeffirelli. Being a Renaissance studies major and all...

I do like Russell Brand! He makes me laugh my self silly on Graham Norton.

He's hosting SNL this week. I think that may be worth tuning in for.

You have the best DVR tips, SP!

Amelia wrote: "You have the best DVR tips, SP!"

Zu got a free subscription to Entertainment magazine and I find myself reading it while I make dinner sometimes. Comes in handy.

Did you watch it? That might have been the worst episode of SNL I've ever seen! It seemed like there was very little to it, and most of the sketches were lame. Weekend update and the start with the O'Reilly Factor were the only funny bits. Brand's monologue wasn't even that funny until toward the end.

Yeah. Disappointing. I'll give his monologue points for simply being standup comedy, but I've actually heard him do that "I'm more famous in England" bit before, and better. I think he was far funnier on Fresh Air. "Well, Terry, if you've ever shot heroin, you know that..."

What was that old lady sketch with the earthquakes all about? I REALLY didn't get how that was very funny, apart from Brand showing the world his junk behind a pair of spanks. :(

Actually, I couldn't see his junk 'cause of the closed captions.

I only liked Weekend Update and that's because of Hader's Stefan. WHAT THE HELL IS WITH THAT DISGUSTING CHRIS BROWN SONG?

The old lady sketch was one of the ones they always do late in the show, where it's really one joke, but they beat it to death. It would have been funny if they had done it once, or even interspersed it throughout the whole show.

I like Stefan, and I thought the Eminem-and-Lil Jon stuff was pretty funny too. And the first thirty seconds of the too-long fake movie promo.

oh, yeah, I thought that the movie promo was funny at first, but then it kept going. Too bad Brand can't do an American accent 'cause I felt that most of the show was like, "Look! We have a host from England! Let's accommodate him!"

I'm seeing a production of Cymbeline this weekend when my mother comes to visit. I don't know this play at all, but it's being done by a good company. THey have a strange gimmick for this one: every actor has learned two of the roles (and each role has been learned by two of the actors), and the audience gets to cast the show for the night by choosing which of two choices gets to play each role, so theoretically every night will be a little different.

It sounds like a gimmick that would be best appreciated if you see the production twice, but I like their stable of actors.

BunWat wrote: "The thing is, even though the audience isn't going to see all the options (unless as you say, you come back more than once) the fact that it gets shaken up and is different every night may keep the..."

I think we're going to opening night, so the likelihood of confusion is high.

Somewhat on topic, one of the funniest things I ever saw was a Second City Toronto live show called Star Trek: The Khan Saga. The opening credits were done with a guy with the Enterprise strapped to his head running around the room holding a flashlight.
The same cast members played the crew of the Enterprise and the klingon ship, with a brief flash of darkness to let them face the other way and switch their costumes/facial hair/prosthetic foreheads...but as the talks between the two ships got more heated, the flashes came faster, and some of them got confused, so they ended up with half-on foreheads and Fu Manchus, and they were all trying so hard not to crack up.
It was fantastic.

ETA:What I guess I'm getting at is if the Cymbeline casting confuses them, there's a potential for comedy, which makes it a different kind of show but no less entertaining.

We bought the tickets on a 2-for-1 special, and I actually may have an extra since there are an odd number of us going. Hie thee to an airport!

the one with Roddy MacDowell in it.

BunWat wrote: "Shakespearian improv!! Yay! Now I want to go with you."

So the Shakespearian improv was excellent, though not improv. The actors seemed to be having a good time, and only one looked a little frustrated with the role he was cast in; I got the impression maybe he keeps ending up with that one, when he wants the other.
It was only the second night, and I think they were a little unsure, but good staging and good acting made up for a couple of momentary stumbles by one or two actors. The staging was VERY close to the audience, in the middle of a U of seats. The king's throne was placed next to my stepfather after we sat down. I was mildly concerned that my stepfather was going to offer him some popcorn. The swordfights had an air of danger since they looked like they might end up decapitating a viewer if not a bad guy. Good stuff. I'd like to go back to see one of the other permutations.

I am partial to Scotland Pa. , an interesting send up of Macbeth.

I'm watching Peter Hall's 1968 version of A Midsummer's Night Dream because I have to write a film analysis, and....it's very...weird.

My 19-year-old daughter and I watched Much Ado About Nothing last night. Keanu Reeves was kind of lame. I loved the woman who played Beatrice. Such a great bitch.

Cynthia wrote: "My 19-year-old daughter and I watched Much Ado About Nothing last night. Keanu Reeves was kind of lame. I loved the woman who played Beatrice. Such a great bitch."

I love that version, except for Keanu.