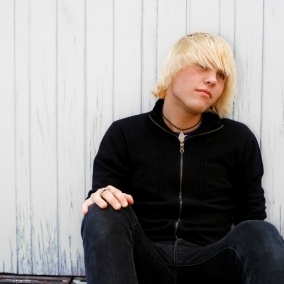 Things you know about the character so far: He was born in San Francisco, moved to New York at age eight. His father is a famous architect, so he has a really nice house. His mother died in a car crash two months after they moved, so he and his dad live alone. Johnny and his father don't really talk much, because is dad is away so often on building projects. He's a car junkie. Can fix just about everything, including the beat-up '84 Camero that his father got him for his 16th birthday. He usually has grease on his hands and carries a toolbox's equivalent of tools in his baggy cargo pants. A bit of a Goth. He usually wears two or three rings, all on his right hand (he's a lefty). Plays the guitar really well (hence the nickname "Johnny Cash").
Where you think the character will end up: I would really like to see him have an important part in the climax of the story, but I don't know what it is going to be or if it even happens. :/P
What you want help with: Just basic character traits-could use some quirks or distinguishing physical features. :)

- Obsessive over cleaning his guitar and is extremely careful with it. He rarely or never lets even his friends touch it.
- Uh, can't think of anything right now.

- Really big hands or feet
- Big nose, or maybe a nose with a bump on it
- Wide eyes
- Cleft chin

The guuitar thing is a great idea! Thanks, Maxy! I'm defenitly gonna use that.